As a first-generation graduate student, Angela Avitua gives credit to her mentors for encouraging her to pursue her passions and open her eyes to possibilities she had never thought of, including pursuing graduate school. "I 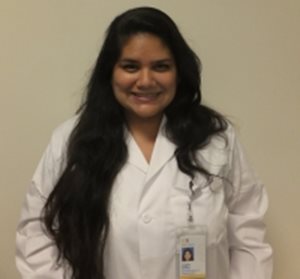 never seriously considered graduate school as an option until I was an undergraduate at the University of California, Davis," said Angela. "Once I started doing research internships, I realized that graduate school was something that I wanted to do."

Angela began her undergraduate studies at American River College, a community college in Sacramento. There, Angela found out about research internship opportunities for community college students interested in transferring to a four-year institution. With her eyes set on attending her dream school, University of California, Davis (UC Davis), a top research university, Angela applied to various research programs to gain research experience prior to transferring. She was matched with Dr. Gene Gurkoff’s lab group at UC Davis, where she completed an intensive two-week program during her winter break. Through this internship, which Angela described as "being made for me," she discovered her passion for research.

After transferring to UC Davis and continuing her research in Dr. Gurkoff’s lab studying traumatic brain injuries, Angela had the opportunity to present her project among 1,600 other students at the 2014 Annual Biomedical Research Conference for Minority Students (ABRCMS). ABRCMS, managed by ASM, is one of the nation’s largest conferences for minority students, military veterans, and students with disabilities pursuing advanced degrees in science, technology, engineering, and mathematics (STEM). Angela was selected as an ABRCMS Student Travel Awardee, which provided her with funds to attend the conference and present her research on a new rodent model of pediatric sports-related concussions. At ABRCMS, all presentations are judged, and the best presentations receive a certificate and monetary award of $250. Angela won an award in the Neuroscience division for best poster presentation.

Looking back at her experience at ABRCMS, Angela says that one of the best lessons she learned was the importance of meeting new people. "ABRCMS was the first research conference I traveled to alone," she explained. "It taught me to step out of my comfort zone and start conversations with people I normally would not have gotten the chance to meet. Now I have a list of individuals who I can reach out to not only as future collaborators, but also as friends."

When asked to describe ABRCMS in one or two sentences, Angela said, "I know this sounds dramatic, but life-changing. There are so many opportunities and people you can meet that can change your education or career path." Hundreds of graduate schools, professional societies, and government agencies fill the large exhibits hall with countless of opportunities for students. Cutting-edge scientific talks are highlighted along with professional development sessions designed to provide faculty, program directors, and students with practical skills to succeed professionally.

The Education Board's mission is to educate individuals at all levels in the microbiological sciences. It supports both student and faculty development through fellowships, online publications, conferences, workshops, and institutes, and networking opportunities.