Antibiotics in Our Food: a Complex Problem That Needs a Complex Solution

Perhaps you’ve seen labels in the meat aisle declaring “No Antibiotics!” With the looming antibiotic resistance crisis, and the unsavory idea of antibiotic residue in our meat products, these antibiotic-free meats are certainly tempting options. Consumers have spoken—Americans and Europeans no longer want drugs going into their meat. However, as I learned after attending the Antibiotics in Food: Can Less Do More? conference, getting rid of all antibiotics in our livestock-rearing systems isn’t quite as easy—or humane—as I had originally thought.

Perhaps you’ve seen labels in the meat aisle declaring “No Antibiotics!” With the looming antibiotic resistance crisis, and the unsavory idea of antibiotic residue in our meat products, these antibiotic-free meats are certainly tempting options. Consumers have spoken—Americans and Europeans no longer want drugs going into their meat. However, as I learned after attending the Antibiotics in Food: Can Less Do More? conference on June 3, 2016, at the New York Academy of Sciences, getting rid of all antibiotics in our livestock-rearing systems isn’t quite as easy—or humane—as I had originally thought. 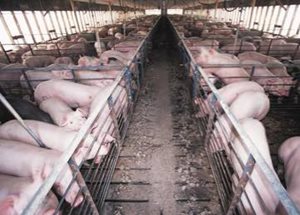 Our animal agriculture system provides us the luxury of waltzing into a supermarket and instantly being able to buy any cut of chicken, pig, cow, etc., without having to raise and slaughter the animal ourselves. However, this system depends on thousands of tons of antimicrobial products per year to treat, control, and prevent infection among livestock. Furthermore, small doses of antibiotics, such as tetracycline, used over long periods of time increase the body mass of animals by as much as 3%, giving antibiotics a new off-label use referred to as “increasing growth production and production efficiency” in the industry. This revolutionary discovery rapidly pushed the industry towards antibiotic-centric production practices. The average farm today puts antibiotics straight into feed and water lines; in extreme circumstances, they are injected directly into animals.

Adding antibiotics to feed and water systems may allow animals in high-production agriculture systems to be less prone to infections, live longer, and grow bigger than ever—so why is the use of antibiotics a problem?

Almost all antibiotics used in animal agriculture are identical to, or analogs of, human antibiotics. Because of this, it is likely that antibiotic-pressured bacteria will become resistant to human therapeutics. The jury is still out about the zoonotic transmission of animal antibiotic-resistant pathogens to humans, but several examples point to a species-independent transmission of bacteria between infected animals and humans living in close proximity. In 2005, France and the Netherlands saw a massive increase in livestock-associated methicillin-resistant Staphylococcus aureus (LA-MRSA) infections among pig farmers. Another study identified high levels of extended-spectrum β-lactamase (ESBL)-producing Escherichia coli in livestock in Germany, and identified that there is a risk of spreading ESBL E. coli between livestock and farm workers.

Another reason consumers are inspired to buy drug-free meat is because of the residues these antibiotics leave in the meat. The U.S. Department of Agriculture (USDA) routinely tests for residual chemicals in meat via the National Residue Testing Program, which has set limits on the acceptable amounts of residual products (such as antibiotics, pesticides, and heavy metals). Even with these limits in place, the incidence of violations still hovers around 1% of all randomly selected samples.  A detailed look at the USDA residue report for 2014 is available here (the 2015 report is not yet available). Unfortunately, detailed reports of how much and what kind of antibiotics are being given to livestock are not kept, which is a major barrier to understanding the world’s antibiotic overuse problem.

The Moral Cost of Removing Treatment

It’s easy to jump to the conclusion that antibiotics shouldn’t be in our food. However, in order to keep up with consumer demand for fresh meat, animals are subjected to intensive animal farming—the most efficient, and often least hygienic, animal farming practice. These conditions require the use of preventative and therapeutic antibiotics to keep infections under control. When kept in similar environments, animals not given antibiotics grow more slowly, take up more barn space for longer periods of time (diminishing turnover), consume more feed per animal, create more manure, and leave greater environmental footprints. Not only that, in situations where farmers are incentivized to keep their animals antibiotic-free, more animals suffer and die as a result of untreated infections so that the end product can keep the antibiotic-free label… and price.

Alternatives to antibiotics have been explored, however they are far from optimized. Ventilating, sanitizing, increasing space, and changing bedding regularly can decrease the number of infections in high-production animal facilities. Some farmers have also started using minerals and heavy metals in place of antimicrobials, but we are now learning that this isn’t a magic bullet either as co-selection of antibiotic resistance genes may occur in bacteria exposed to high levels of metals and/or minerals. The use of heavy metals also increases the likelihood of metal residue within the meat. However, there is hope: in the last few years studies on bacteriophages have shown that they may one day serve as natural replacements for antimicrobial agents.

Data Collection and Regulation Around the World

Even so, the US is ahead of the curve. In addition to some record keeping, the FDA has banned fluoroquinolones as growth promoters in poultry production, and pressure from consumers is leading big poultry purchasers to demand antibiotic-free animals from suppliers. However, there exists no international consensus regarding banning or allowing certain antibiotics, even those essential to human health. This means that antibiotics such as fluoroquinolones and cephalosporins (deemed by the World Health Organization to be essential medicines) that are banned in one country may not be banned in neighboring countries. On top of that, worldwide regulations are difficult to enforce. Countries without the proper infrastructure to enforce antibiotic use regulations (such as requiring a veterinarian to prescribe antibiotics to farm animals) may develop black markets for these very drugs. This further hinders collecting data regarding usage and allows these antibiotics to be used in unapproved quantities and for illegal purposes.

Less Is More, but None Is Not an Option

Ultimately, there is a globally rising consumer demand for increasing meat production, but also a conflicting, growing trend to abolish antibiotic use in animal agriculture. So far, we have not yet optimized antibiotic-free production methods to provide animal products on the scale that the world market demands. More research must be done to find ways to allow high-yield production of meat without sacrificing animal welfare or overusing antibiotics critical to human health. Although antibiotics for prophylactic and growth-promoting purposes should be (and in some cases have been) banned, the humane treatment of animals is also extremely important, and animals should not be made to suffer for the “no antibiotics” stamp of approval and financial gain of the farmer. It seems that the best methods to curb antibiotic resistance are to (1) increase record keeping and ensure enforcement of regulations, (2) optimize humane and hygienic animal-rearing facilities, and (3) invest in research to find more antibiotic alternatives, with antibiotic use restricted only to cases of animal need and welfare. We are far from ending antibiotic abuse, but the world is slowly realizing that this complex problem needs to be addressed soon for the sake of human and animal health.