ASM Members Deliver a Landslide Endorsement for Governance Change—Part I 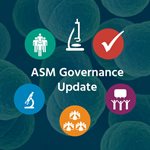 “Life can only be understood backwards; but it must be lived forwards,” wrote the Danish philosopher Søren Kierkegaard. It was a thought that crossed my mind when the voting ended on August 31 in a referendum on ASM’s future governance. I wondered how those who come after us in ASM would look back at this vote. Since I am stuck living forward, I can only declare my belief that ASM members were making a wise move. They were casting ballots to decide what the ASM of the 21st Century should look like, and how we should be governed. People are cynical about elections these days, but I was stunned by the results—over 98% of voting ASM members approved the proposed new, modernized governance system. This is a historic moment for an association that is over 110 years old.

Change does not come easily to most organizations, let alone to one with more than a century of history. Indeed, twice before ASM tried—and failed—to change its governance structure. This time, ASM members embraced change, realizing that ASM must become more modern and more nimble in its decision-making and it must be ready to adapt to the rapid changes sweeping through the microbial sciences and to the new realities facing scientific associations. All these considerations went into the overwhelming “yes” vote for a newly balanced organization, establishing a true partnership between volunteers and professional staff.

This vote authorizes several changes to how ASM is governed, but in essence there are three major changes. ASM will now be governed by a Board composed of 14-18 Directors, led by the ASM President serving in a new role as Board Chair. This will be a big change from the current Council with its 93 elected members. Because of its smaller size, the new Board of Directors will be able to govern with agility and efficiency. The old Council grew as the Society grew in size and scope. More seats were added to reflect the growth that was a sign of ASM’s success, but over time Council became more of an assembly of stakeholders than a governing body, which caused the Society delays in decision-making and missed opportunities to capture innovation.

Because representation is extremely important for a professional organization, the second major change that the new governance structure will establish is a Council on Microbial Sciences (COMS) to speak for the different components of the Society—the Divisions and Branches, plus at-large elected leaders from the various fields of microbial sciences. The COMS will be the main advisory body to the Board of Directors with the special task of identifying scientific priorities and making recommendations for the future direction of the Society.

The third change embodied in the new governance structure is a true partnership between volunteer members, who will remain in charge of the scientific and subject matter expertise of microbial sciences, and the professional staff, who will be more effective at carrying out the tasks needed to further the Society’s goals. When the ASM sought a new Executive Director—yours truly—the title was changed from Executive Director to Chief Executive Officer. I believe that ASM leadership sent a signal that volunteers and staff must be equal partners in furthering the ASM mission.  Two specific charges for the new CEO were assigned to me by the Officers. The first is forging a collaborative partnership with the governing bodies of ASM in order to focus on strategic topics of highest priority.  This would be carried out by engaging ASM leadership and members, collectively and individually, in understanding and analyzing the organization’s environment, challenges, and opportunities.  The second is supporting ASM leadership and being the ambassador for ASM, microbiology, and related professions to key audiences and stakeholders to build ASM’s public image and that of its membership and the scientific community.  As the Officers can attest, I pressed them hard from many angles to ensure that they were truly committed to a collaborative partnership that would go beyond words of thank you, polite acknowledgements, and best intentions, and be a true effective partnership empowering decision making in the distinction of roles and responsibilities. As such, there will be new opportunities for members to engage and take part in moving ASM into the future.

ASM’s new Bylaws and accompanying Policies and Procedures Manual incorporate the many changes made necessary by the new governance structure and the new relationship between volunteer members and ASM staff. The Bylaws and Policies and Procedures Manual are available on our website as the main deliberations of the Board of Directors and COMS to ensure maximum transparency in the Society, a core principle of the new governance.

The new Bylaws prepare ASM for a critical moment in its long history. Thanks to these changes, we have the opportunity to position ASM at the forefront of innovation in the world of associations. ASM could become the Tesla of scientific societies, always innovating, pushing frontiers, and experimenting with new ways to advance the microbial sciences and our members with them. This would not be possible without an appropriately sized Board of Directors to make strategic decisions, a representative advisory body (COMS) to scan the horizon, and a visionary staff to manage the Society from day to day at this time of great change and uncertainty.

These changes are not about organizational navel-gazing or new chain-of-command charts. They are designed to give our Society the ability to move effectively and innovate more creatively while advancing the microbial sciences. The new governance structure promises to make ASM more effective, more nimble, and more experimentally oriented. This is precisely where ASM needs to be in this time of great change and great excitement in science.

In the second part of this blog, I will examine some priorities for ASM that in my view should be strategically addressed by the new governing bodies. Stay tuned for the next bLogPhase posting.

Stefano Bertuzzi is the CEO of the American Society for Microbiology.