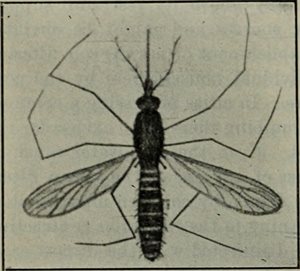 Figure 1. Malaria has long been a concern for human welfare. This depiction of a malarial mosquito is taken from the 1853 session notes of the Legislature of the State of California. They describe the process by which malaria is spread:

“When the blood of a human being is sucked into the stomach of a mosquito of the genus Anopheles, the malarial parasite undergoes a sexual development and gives birth to a large number of minute, spindle-shaped cells, known as blasts, which enter the salivary glands of the insect and are ejected with the poison into the system of the next person bitten by the mosquito…In order to avoid this result it is necessary to avoid the bites of malarial mosquitoes…” Source.

Malaria, a tropical disease spread by mosquitoes, kills more than 400,000 people annually. This year the World Health Organization placed special emphasis on expanding and improving prevention of the disease during World Immunization Week. Excitingly, a new malaria vaccination has been shown to be 100% effective 10 weeks post administration in clinical trials, giving hope to areas of the world that struggle with this tropical sickness.

Malaria is a life-threatening parasitic infection caused by members of the eukaryotic genus Plasmodium. Most deaths are caused by the species P. falciparum, but P. vivax, P. ovale, P. malariae, and in rare cases P. knowlesi, can all cause disease in humans. Symptoms of the often-fatal infection include fever, vomiting, and seizures, and acute disease can also cause serious complications in the respiratory, renal, nervous and hematopoietic systems if not treated immediately.

It all starts with the bite of a female Anopheles mosquito that harbors Plasmodium parasites (also known as sporozoites when in the mosquito host). When the mosquito’s proboscis inserts into a blood vessel close to the skin, it injects sporozoites from its salivary gland into the human host while taking a blood meal. The sporozoites then infect and replicate asexually within liver cells in a structure called a schizont. When the schizont ruptures, it releases merozoites, or daughter cells, that can infect erythrocytes (red blood cells). Here also, the parasites mature within schizonts, which rupture and release more merozoites.

This cycle of infection, maturation, and rupture within erythrocytes is responsible for the disease symptoms of malaria. When an uninfected mosquito bites an infected host, the bloodborne parasites are ingested and undergo a sexual replication cycle in the gut of the mosquito, called the sporogonic cycle. Eventually, mature sporozoites make their way into the mosquito’s salivary glands, ready to inoculate another host. 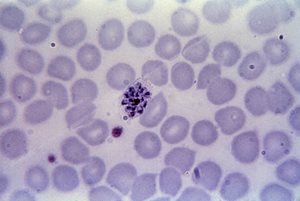 Because mosquitoes are found on almost every continent, the spread of malaria seems unstoppable. Humans have nevertheless developed some tools to help prevent spread of the disease. Outside of mosquito control campaigns that use pesticides and habitat elimination to decrease numbers of disease-carrying mosquitoes, malaria prevention can be classified in 3 categories: physical/chemical barriers, prophylactic antibiotics, and finally, immunizations. Before we discuss the exciting new immunizations for malaria let’s take a look at what we have been relying upon for decades.

The easiest and often cheapest way to prevent malaria is to prevent mosquito bites. Clothing, screens for dwellings, or mosquito nets can prevent bites by acting as physical barriers. Spray repellents that contain DEET, IR3535 (Ethyl butylacetylaminopropionate), Oil of lemon eucalyptus, or Picaridin as active ingredients can also act as supplementary chemical barriers.

For those traveling in malaria-endemic areas, doctors may prescribe additional prophylactic antibiotics against the parasites. However, antibiotics have their drawbacks. A classically prescribed malaria prophylactic, chloroquine, is being rendered useless by increasing malarial resistance to it in several parts of the world. Mefloquine, doxycycline, or a combination of atovaquone and proguanil hydrochloride can also be taken preventatively.

However, these antibiotics may be scarce in rural areas, and the prophylactic must be taken daily for the entire time the person could be exposed to mosquitoes. For those living in malaria-endemic regions, these prophylactics must therefore be used for a lifetime. Not only is this a financial burden, but it also increases antimicrobial resistance to these drugs in other microbes (as well as in the parasites themselves, as we witnessed in the case of chloroquine).

None of these prevention techniques are successful in preventing bites 100% of the time. It seems obvious that an immunization against the Plasmodium parasites may be the most consistent and effective malaria prevention method possible. So why haven’t we seen one until recently?

Only Partially There: the RTS,S Malaria Vaccine

Developing an effective malaria vaccine has taken some time. The only approved vaccine as of 2015 is the RTS,S Malaria Vaccine developed by the PATH Malaria Vaccine Initiative and GlaxoSmithKline with financial support from the Bill and Melinda Gates Foundation. The recombinant vaccine is composed of P. falciparum circumsporozoite protein (CSP) linked to a hepatitis B surface antigen to improve immune response. When combined with other external adjuvants, the recombinant protein stimulates the production of antibodies that prevent liver cell invasion by P. falciparum sporozoites.

Although an important accomplishment, RTS,S has very low efficacy (25-50%). The vaccine also requires multiple injections because its already low potency wanes over time. In fact, three doses of vaccine plus a booster reduced the risk of acquiring malaria by only 26% over three years, and offered no protection against already active malaria infections.

A Crazy Approach: Immunization via Simultaneous Infection and Treatment

One of the problems with RTS,S and previous vaccines for malaria is that they contain only single molecules from Plasmodium. They are unable to provide complete immunity against malaria because they are ultimately incapable of stimulating a long and lasting immune response.

Researchers at the University of Tübingen, in collaboration with the biotech company Sanaria Inc., tried something different. Instead of purifying individual proteins from the parasite, they used a vaccine containing live and un-weakened Plasmodium to stimulate the immune system into producing antibodies against it. This is not the first incidence of a live vaccine—weakened but still “live” viruses have been used in attenuated vaccines against measles, mumps, rubella, and chickenpox in the past (although whether viruses could be considered alive is a debate for another time). In fact, the idea of using live sporozoites to inoculate humans had already been tried successfully in 2009, though the method of inoculation relied upon the bite of a malaria-infected mosquito—not the most efficient, consistent, nor appealing method of vaccination.

This time, live parasites purified directly from the salivary glands of mosquitoes were introduced into the bloodstream via injection into the study participants’ veins. Of course, this could easily lead to a full-blown malarial infection so to prevent this, the research participants were simultaneously given antibiotics containing chloroquine.

In theory, the chloroquine-sensitive parasites would be killed quickly, preventing infection, but not before exposing the host to intact parasites against which the host’s immune system could launch an attack. With the right dosage of sporozoites and chloroquine, researchers confirmed that a live inoculation can indeed offer protection—and not infection—of a host. The study reports that a group of nine participants with no prior exposure to malaria exhibited 100% protection against malaria ten weeks after receiving three doses of the new vaccine, PfSPZ-CVac.

Although still in its early stages, the approach looks promising. The PfSPZ-CVac vaccine has been shown to be safe, but more research must be done to track the vaccine’s efficacy over the course of several years. In the meantime, while not 100% effective, mosquito control campaigns along with physical and chemical barriers against the bites of Anopheles mosquitoes are still the best methods of preventing malaria in most endemic regions. Though as World Immunization Week comes to a close, we remain optimistic that this ongoing work will one day yield a strong and long-lasting malaria vaccine.

Fatal Malaria in the U.S. More Common Than Previously Known