An Exploration of Atmospheric Microbiology

“We cannot fathom the marvelous complexity of an organic being; but on the hypothesis here advanced this complexity is much increased. Each living creature must be looked at as a microcosm—a little universe, formed of a host of self-propagating organisms, inconceivably minute and as numerous as the stars in heaven.” - Charles Darwin

We have learned a lot about microbes living in land, water, and host environments—without them, we would know very little about the structure and function of microbes. However, little is known about microbial environments in the atmosphere, the layer of gases common to all surfaces around the globe. Here, we take a look at the biodiversity of microbes in the atmosphere.

Microbial Biodiversity in the Atmosphere 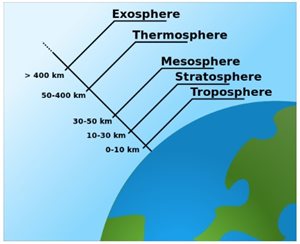 Figure 1. Layers of the atmosphere. Source

Aeromicrobiology investigates different regions of the atmosphere, which vary in factors such as composition, pressure, water vapor, cosmic radiation, solar UV radiation, presence of particulate matter, temperature, and others. Adding to the  complexity, these factors respond to biogeochemical cycling of nutrients, short-term weather patterns, and long-term global climate changes. There is thought to be a seasonal shift in the aeromicrobiome, with the largest numbers of microbes during summer or spring. Earth’s “atmosphere” consists of gaseous layers held in by gravity, spanning from the troposphere to the stratosphere. 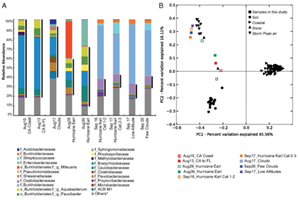 Some organisms, such as Serratia liquefaciens and some species of Carnobacterium, are capable of growing at 0°C in a CO2-rich, oxygen-free atmosphere at a low atmospheric pressure of 7 millibars in experimental conditions. Most research suggests that microbial life cycles are dependent on aerosolization processes, but researchers are continuing to search for the upper limit of the active atmospheric biosphere.

The upper atmosphere has an increased amount of UVA and UVB rays, which are damaging to nucleic acids and proteins. Additionally, low temperatures can lead to freezing and desiccation. Microbe survival—even in dormant states—depends on the ability to repair this damage. Some bacteria protect themselves through adsorbed water on the surface of suspended atmospheric particles, which protects them from drying.

Growth and Division of Aerosolized Microbes

There is some evidence that microbes are metabolically active within clouds. Bacteria that have been isolated from clouds are able to use organic compounds such as acetate, formate, succinate, L-lactate, formaldehyde and methanol. Serratia marcescens may be able to undergo cellular division while residing in a nutrient-containing aqueous droplet of 2 to 6 μm in diameter. Bacterial and fungal metabolism at the atmospheric boundary layer is not limited to clouds—dicarboxylic acid (a type of organic aerosol) can be efficiently transformed by airborne microbes outside of clouds as well. This shows that biodegradation could be an important atmospheric transformation pathway for organic compounds. One study showed that aerosolized bacteria increase their ribosome production when supplied with carbon substrates in the lab. The jury is out on whether or not other bacteria can grow and divide while floating in air.

Effects of the Atmosphere on Microbial Metabolism

Nitrogen oxides are commonly emitted from fuel combustion and burning of fossil fuel. Nitrogen dioxide has a low level of solubility in water, but a much higher solubility in air (nitrogen oxide has the the opposite solubility traits). Nitrogen byproducts in the atmosphere are a point of concern for human health—including cardiovascular disease and respiratory symptoms—especially in the face of increasing urbanization and air-quality problems. Studies of Pseudomonas fluorescens showed reduced swimming motility and decreased swarming when exposed to nitrogen dioxide. Further, NO2-exposed P. fluorescens developed more antibiotic resistance against ciprofloxacin and chloramphenicol. Stratospheric ozone depletion also depletes bacterial concentrations in Antarctic marine environments. Lags in recovery to UV exposure were attributed to energetically expensive repair of UV-induced DNA damage acquired during periods of low total column ozone. These are just two of the many ways the atmosphere can affect the functions of microbial metabolism.

In part because atmospheric scientists have considered the atmosphere as an inhospitable environment containing dead cells and inert particles, there has been an inherent bias against conducting research on living organisms in atmospheric air. Even as research reveals the atmosphere to be a dynamic biotic environment, challenges limit the expansion of aerobiology in modern science; in particular: culturing airborne bacteria is very difficult. Atmospheric bacteria live in an environment where pressure, nutrient makeup and concentration, and temperature conditions are significantly different than those in the lab. If the atmosphere is so fundamentally different, is an agar plate going to do the job?

In a word, no. But one way to work around this problem is to take large samples of air droplets during water collection flights. During these flights, cloud water is collected over an oval-shaped track, with adjustments made to remain with the same cloud field. Cloud samples are then frozen to -80°C immediately after collection, stained to determine microbial quantity and metabolic activity, or examined via ion chromatography to determine nitrite, nitrate, sulfate, ammonium, calcium, magnesium, and potassium levels. Atmospheric bacteria collected by this method have the metabolic ability to transform compounds including carbon, nitrogen, and oxidative species. In 2012, enough bacteria were pulled from the atmosphere to conduct 16S rRNA analysis, allowing scientists to assess the atmospheric microbial population composition.

If you don’t have access to a Beechcraft Duchess twin-engine aircraft, you could just climb a volcano. Of course, this approach to sample collection isn’t easy, either: over four days, scientists climbed to a remote volcano and collected samples within a water-based preservation solution to prevent degradation of the DNA and RNA. Culture-independent microbiology research, based on rDNA and rRNA sequencing data, has recently supported the evidence for metabolic activity in the troposphere (see Fig. 2).

Microbes are important in all environments on earth, including those formerly considered bereft of life. Microbes and the atmosphere have an interdependent relationship: metabolic activities of atmospheric microbes affect global functions including precipitation development and carbon cycling, and in turn microbial biodiversity of the atmosphere is affected by changes in temperature, particulate matter, and UV radiation. Methanotrophic microbes consume much of the methane produced in terrestrial ecosystems and prevent it from reaching the atmosphere, and microbes are involved in nitrogen fixation, decreasing the amount of nitrogen available for greenhouse gas formation. Further, microbes are able to use the gaseous form of nitrogen (NO2)—something most other organisms on Earth cannot. Because microbial populations shift faster than those of most living organisms, we can use microbial populations as sentinels to determine whether climate change is having effects in particular environments.