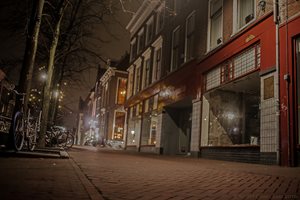 Figure 1. The former site of Antoni van Leeuwenhoek’s house is now an abandoned storefront. Notice the small brass plaque all the way to the right at center.

It was an overcast afternoon in the Netherlands. I was on a train traveling south at 200 kilometers per hour, gazing out at the bright green Dutch farmscape. I had been in Amsterdam for a meeting at Micropia and had given a talk at Leiden University. Now I was headed to the small medieval city of Delft. With the main objectives of the trip behind me, this final weekend was more of a scientific pilgrimage. Delft is where microbiology began. It is where bacteria, red blood cells and many other microscopic cells were first observed in the late 1600s. In this very place, there was an awakening of humankind to a hidden realm of life—an awakening to the microbial world. The resident of Delft who was first to experience that world was the famous clothing merchant turned microscope maker, Antoni van Leeuwenhoek. Yet, because van Leeuwenhoek is revered as a “father of microbiology” and because he lived so long ago, he seems like a fictional character. “What was his life really like?” I wondered, as the train arrived. I was there to come as close to an answer to that question as I could. I wanted to walk the same roads van Leeuwenhoek walked and see where he lived and worked. 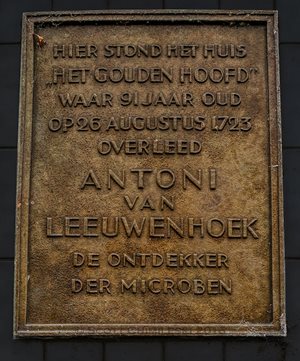 Figure 2. The commemorative plaque at the house site.

After a short walk from the train, I checked in to my hotel, threw my bags in the room, and was back outside. It was getting dark and after reading about van Leeuwenhoek for years, I was just a few minutes walk from the site of his former house. This is the house (demolished in the 1930s) where he lived, where he constructed his handmade microscopes, where he made his scientific discoveries and where he died. I matched up a historic map from the Delft University of Technology with the map on my phone, watching my GPS position move across the ancient city blocks. The street was empty and quiet as faint sounds of people at bars and restaurants echoed in the background. The corner I was looking for appeared like every other corner. In fact, I walked right past it. Only when I turned around did I see the brass plaque marking the spot. The plaque, unlit, with cobwebs in the corners, held the message:

"The discoverer of microbes."

It was a special and eerie moment, outside what is now an abandoned storefront. Somewhere in there behind the glass, among the dark scattered cement, was the physical location where van Leeuwenhoek first saw microbes, or as he called them, animalcules. 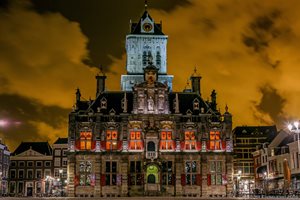 As van Leeuwenhoek sold clothing and began to make lenses for his microscopes, he also worked right around the corner from his house at the Delft City Hall. For nearly four decades, van Leeuwenhoek held the title of “Chamberlain of the Council Chamber of the Sheriffs of Delft.” It was an honorable and overall cushy job to have. He collected wages and other benefits, but had relatively low-key routine responsibilities. The terms of his appointment in 1660 tasked him with the opening and shutting of the chamber, keeping the space clean, starting fires when needed, keeping whatever coal was left over from fires for his own profit, and making sure “no mischance” occurred from these fires or from lit candles. The central stone tower of the City Hall was built from Belgian limestone in 1300 and the area beneath was once an old prison. The colorful renaissance-style building we see today was constructed around the central tower in 1618, meaning that it had been there just 14 years when van Leeuwenhoek was born (in Delft) in 1632. 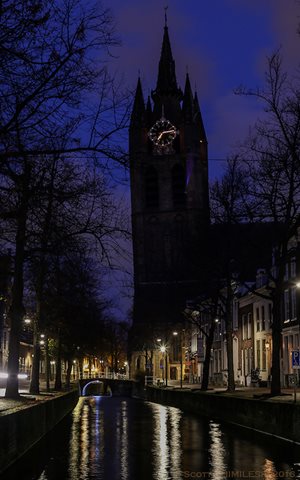 Figure 4. The Oude Kerk, under which van Leeuwenhoek and many others are buried in ancient crypts.

When van Leeuwenhoek died in 1723, he was buried underneath the Oude Kerk, one of two gothic churches in Delft. Oude Kerk means old church, an understatement considering that it was built in 1246. Because of a weak foundation, its 75 meter brick tower has a characteristic lean. The other even taller “new church” or Nieuwe Kerk is opposite the City Hall in the center of town. It may be new compared to the Oude Kerk, but the Nieuwe Kerk is still over 500 years old, constructed between 1396 and 1496. The churches have a powerful presence over Delft, past and present. They are stunning visual landmarks and the bells in their mechanical clock towers sing out across the town every hour, a ghostly reminder of the passage of time. Some of the bells were fashioned during the 1600s and sound today exactly as they did during van Leeuwenhoek’s lifetime. Along with van Leeuwenhoek, around 400 other people are buried in the crypts below the Oude Kerk, including another famous resident of Delft, the painter Johannes Vermeer. 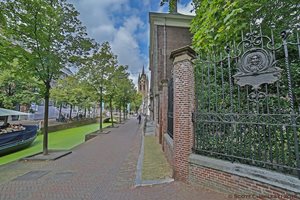 Figure 5. Canals filled with duckweed. A second memorial sign of van Leeuwenhoek is seen at this site on the right, with another view of the Oude Kerk in the background.

The house site, the City Hall and the Oude Kerk are all fascinating sites to visit. But for me, the canals of Delft are most mysterious. Leeuwenhoek collected many of his samples in these waterways. In late summer they are filled with duckweed—every tiny leaf inhabited by rotifers and other microbes living there just as Antoni saw them. I could not help but wonder, as I scooped up some duckweed, whether there were a few individual microbial cells directly descended from those that Antoni collected, somewhere in that handful. I could not help but wonder what Antoni would think, if he knew that he had only seen the surface of a microbial world with such remarkable biodiversity, that we have just begun to explore it today. Imagine, that of the hundreds of microscopes van Leeuwenhoek meticulously constructed, only ten have been recovered. Just a few years ago in 2014, a brass van Leeuwenhoek microscope was dredged up from a canal just like this one. That microscope sat in perpetual darkness underneath the busy streets of Delft for over 300 years. There must be more of his instruments down there, deep in the muck.

All photographs in this post taken by Scott Chimileski