Bottoms up! Discover the Microbes in Probiotic Drinks

Yogurt has long reigned as the go-to probiotic food in the supermarket, but for those who aren’t keen on dairy, new choices are bubbling to the surface.  “Probiotic drinks” such as kombucha, a fermented tea, and probiotic-added juices are hitting the scene in full force.   But what exactly is in those tasty $4 bottles? My curiosity about this question led me to start acting a little odd every time I went into a grocery store.  With microbes on my mind, I'd make a beeline for the "healthy drinks" section, compelled to check the labels of every single brand of kombucha and probiotic juice, whipping out my cell phone to photograph the ingredient list, sometimes buying one lucky bottle to sample and take back to the lab.

Either alone or in combination, these microbes ferment the sugars in the beverage and produce end products that add to the flavor and carbonation. For example, lactic acid production by L. plantarum or B. coagulans adds tartness, and carbon dioxide released by S. boulardii makes drinks effervescent.To take a closer look at which bugs were waiting in these colorful bottles, I isolated the microbial ingredients from a few choices, stained the cells, and photographed what I found.  I'm happy to report that bacteria and yeast can be quite photogenic, if a little funky-smelling.  In my exploration, the three species of microbes I encountered most frequently in probiotic beverages were Saccharomyces boulardii, Bacillus coagulans and Lactobacillus plantarum.  These are considered safe for human consumption, so they work well for BSL-1 educational activities (Follow the “DIY micro” tips shown below).

So what do scientists know about the star players in these beverages?

Like that old Sesame Street song, “One of these things is not like the others,” the first, most drastic thing to note is that Saccharomyces boulardii is a yeast while the other two isolates are bacteria. Both are single-celled organisms, but yeast are eukaryotes belonging to the kingdom fungi.  S. boulardii is a close relative of the more commonly known brewer’s yeast, Saccharomyces cerevisiae, a natural inhabitant of the skins of grapes and other fruits. In fact, by molecular analysis, S. boulardii is considered taxonomically to be a subspecies of S. cerevisiae. The S. boulardii strain of yeast was first isolated from the lychee fruit by Dr. Boulard nearly 100 years ago. 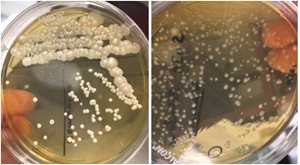 How is S. boulardii distinct from S. cerevisiae?  Comparative genomic analysis indicates differences in transposable elements, hexose transport and asparagine utilization genes, along with higher copy numbers of repeats in genes encoding flocculin proteins in S. boulardii, which may enhance its cell adhesion properties. Adhesion of pathogenic bacteria onto the yeast cell surface is one proposed mechanism for its effectiveness  as an anti-diarrheal agent.

According to the label, the popular kombucha brand GT’s Synergy contains both S. boulardii and the bacterium Bacillus coagulans. In typical kombucha, the microbes coexist in a sort of floating mat called a scoby (“symbiotic colony of bacteria and yeast”). Scobys are used as starter cultures for homemade kombucha. Bacillus coagulans looks distinct from yeast colonies when cultured on agar plates, appearing more bumpy and translucent compared to the round off-white colonies of yeast.

Bacillus coagulans has been popping up in all sorts of food products, from probiotic tea to trail mix to gummy candies.  You may recognize it listed in ingredients as GBI-30, 6086 (trademarked as Bc30 by Ganenden), a common commercial strain. (Some products still list Bacillus coagulans by its former misnomer Lactobacillus sporogenes.) B. coagulans has similar metabolism to lactic acid bacteria, producing L-lactic acid as a main fermentation end product, but because it forms endospores (or spores) it cannot be classified as a Lactobacillus. 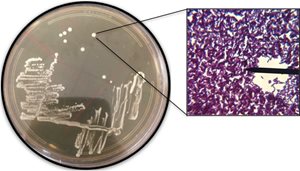 Being able to make spores is quite important in the context of stability in food products. Spores are specialized cell types that keep the bacterium in a dormant state and protected against stress such as heat and desiccation. Because of this resilience, spores can be added to many dry food products and still be considered alive in the product, ready to spring back into action in a favorable environment with the right temperature, moisture, and nutrients—like inside the gastrointestinal tract!

Last but not least, I isolated Lactobacillus plantarum from probiotic GoodBelly juice drink. Colonies of L. plantarum appear white and circular, and Gram staining reveals gram-positive rods. Lactobacilli are among the most thoroughly studied human probiotic strains, and many are used in traditional lacto-fermentations such as kimchi, sauerkraut, and sourdough. Lactobacillus plantarum naturally exists as part of the human oral flora and is widespread in the environment on the surfaces of leaves and fruits. L. plantarum is also a dominant member of the gut microbiome of Drosophila fruit flies, and some strains can affect the fly host’s behavior and growth.

The strain often used in probiotic drinks is L. plantarum 299v, which has been clinically studied for improving digestive health. One of the ways in which lactobacilli may exert their positive effects on gut health is by adhering to the cells of the intestine. Lactobacilli can bind to mucin, a protein that coats the top layer of intestinal epithelial cells, which may prevent pathogens from colonizing.

DIY micro: To isolate Lactobacillus plantarum: Streak onto MRS (de Man, Rogosa, and Sharpe) agar. Incubate aerobically or with a CO2 gaspak at 30-33°C for 48 hours. Look for small, round, white colonies that smell like yogurt. Note: other Lactobacillus species have similar colony morphology, so an additional selection step would be needed to distinguish L. plantarum if starting with mixed lactobacilli.

Learning how probiotic microbes may impact human health is a very active and evolving area of discovery, like this recent clinical trial showing that L. plantarum lowered the risk of sepsis in newborns. Despite controversy over the value of probiotic products, it is an exciting time for the probiotic drink market, with lots of new products hitting the shelves. So take a stroll by the beverage aisle, and if one type does not agree with you, there is plenty of diversity available.  If you like tangy fermented foods, then the Lactobacillus-containing drinks might be the best bet, or if you are feeling adventurous, sample the wide array of kombucha flavors or host a kombucha-tasting party. Maybe you will discover a new favorite microbe-infused beverage!

Juliana Ansari is a microbiologist who studies host-associated microbes from biofilms of oral streptococci, to intracellular tickborne pathogens, to plant root symbionts.