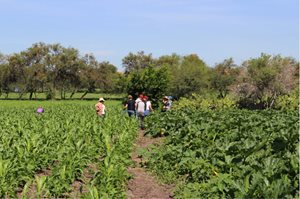 Few of us harvest our own crops, milk our own cows, or ferment our own beverages. Our foods and drinks arrive at stores or farmers markets in an array of colorful shapes and sizes already neatly packaged, or served to us beautifully and fragrantly prepared at a restaurant. But, where did these fruits, vegetables, cheeses, and beverages come from?

The proximate answer is that the food came from “Wherever I bought it.” 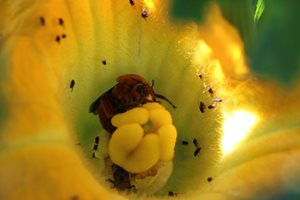 The more philosophical answer might start with “...In a land far, far away, there was once a plant. The plant was covered with microbes. Some of these microbes were endophytes (internal microbes), many of which help with plant defenses against pathogens or herbivores, and a root surface (rhizosphere) microbiome that functions in defense or nutrient acquisition. The plant co-evolved with these microbes, as well as with insects - producing sweetly scented flowers to attract pollinators, and evolving a pharmacopeia of defensive chemicals to keep from being eaten by hordes of hungry herbivores. And so the plant, microbe, and insect community co-evolved in a particular geographic place, for millions of years. Eventually, a hungry human wandered by, perhaps attracted by the same sweetly scented, colorful flower that attracts pollinators. The hungry human perhaps ate the flower; perhaps ate the leaf; perhaps saw the flower and waited for the resulting fruit to ripen; perhaps waited too long until bacteria on the fruit began to ferment it and produce alcohol. If they liked the plant, hungry humans would have then returned to the same plant populations for thousands of years, picking those that smelled the best, tasted the best, sated their hunger, and maintained their health. Hungry humans, having large brains, would have learned to propagate the seeds of the plants they liked best. Eventually, this would have produced a domesticated plant – one that could be planted and harvested dependably, so that the hungry humans could stay in one place with a steady food supply and therefore build a village instead of wandering over vast distances to hunt and gather. 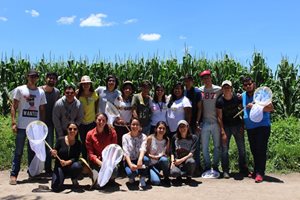 Figure 3. The Clubes de Ciencia "Insects and Food" class in the milpa.

But, how did a select few of those plants move from very localized villages within a small geographic area to global production and ubiquitous presence in our stores and menus? And, what happened to those endemic, plant associated microbial and insect communities when plants were transported worldwide by humans? To explore these questions, the Global Crop Mutualist Alliance, which I am helping coordinate, is collecting leaf and root samples from crop plants all over the world. Specifically, we are looking to collect samples from crop plants growing in the geographic region where these plants are native, and to collect from the same crop plant species in the regions where they have been introduced. This will allow us to test how recent global crop plant movement for agriculture may have altered beneficial plant associated microbial and insect communities, and whether any beneficial microbial mutualists may have been left behind in the region where the plant is native. 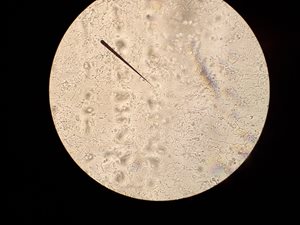 Figure 4. In the lab, the class looked at a drop of pulque under a microscope to find the unseen microbes that produce this favorite fermented beverage. Photo By: Ana Fernanda Rosiles

One goal of The Global Crop Mutualist project is to leverage individuals (especially students) as citizen scientists, and in doing so, have students collect samples that will be part of this larger collaborative project. In conjunction with the Global Crop Mutualist Project, Rob Dunn’s lab at North Carolina State University is launching a series of farm-to-table citizen science projects to engage students as citizen scientist collaborators in this endeavor. One component of this project is an annual intensive short course I teach through Clubes de Ciencia in Guanajuato, Mexico called “Insects and Food: How Coevolution Shapes our Cuisine.” Guanajuato, where this course takes place, is very close to the geographic region of origin for several species of cultivated pumpkins (Cucurbita pepo and Cucurbita ficifolia). While this course broadly explores mechanisms and consequences of plant/insect/microbe coevolution over many millions of years, and how human selection for agricultural traits within the last 10,000 years alters these ecological interactions, the proximity of wild progenitor pumpkin populations make pumpkins a highly relevant focus. 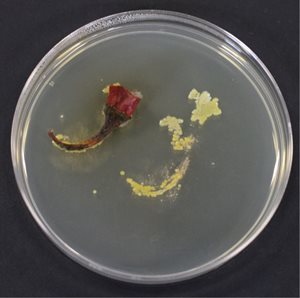 Figure 5: A microbial print of microbes associated with a chili pepper, made by collecting a pepper from the field into a sterile bag and then pressing it onto agar media.This microbial print was generated by a student.

The course starts by using anthropological studies to reconstruct how early human hunter-gatherers in this region of Central Mexico would have likely interacted with the native endemic plants, and the invisible microbial communities that colonize these plants. For thousands of years, these interactions (and therefore human survival) depended on interactions with plants (and the naturally occurring plant microbiome) in the immediate geographic vicinity. Perhaps the most important component to human survival is a dependable source of clean water. Across the world, different cultures used different fermented beverages - wine, beer, sake, kombucha - as a source of clean water before the existence of centralized water purification systems. In this arid region, what did humans drink - especially in the dry season, before the convenience of bottled water, Powerade, and Coca-Cola? Taking a walk through the landscape right outside the classroom door, we almost immediately encounter the maguey plant. In these arid central highlands, where early agriculture in Mexico was perhaps the most advanced in the world, the maguey (Agave spp.)— now best known and celebrated worldwide as the source of tequila and mezcal — was a plant that provided a steady source of clean water filled with plant protein and other nutrients. Aguamiel, or “honey water,” is the sap of maguey plants, and an individual maguey plant can provide up to 1,000 liters of water over 3–4 months. If not all of the sweet sap is harvested at one time, it collects in the crown of the plant, where naturally occurring leaf lactic acid bacteria ferment the sap, producing a beverage called pulque. Like the more celebrated beers and wines from the Middle East and Mediterranean, slightly alcoholic pulque has been a delicious, nutritious, clean, dependable source of water and nutrients for local inhabitants for thousands of years. 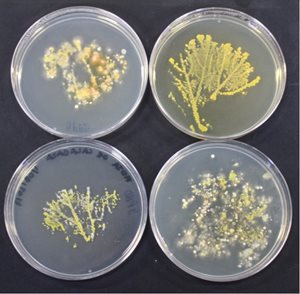 The class also takes a field trip to a milpa, a traditional agricultural field where multiple crops (often corn, pumpkin, beans, and chiles among others) are co-cultivated. In these polycultural systems, rhizobia in bean root nodules fix nitrogen, squash provide ground cover and water retention, and maize provides a trellis. Students collect insects and microbes from these different crop plants to help understand the extent to which beneficial insect and microbial plant mutualists—plant endophytes (microbes that live within a leaf), epiphytes (microbes that live on the surface of a leaf) and rhizosphere microbes (those that live in the soil)—are unique or shared between these milpa plants. Students photograph insects occurring in squash flowers to add to the Great Pumpkin Project iNaturalist page, and collect leaves in sterile bags to bring back to the lab, and plate out what the local epiphytic leaf microbes are. By determining the microbial and insect diversity in the region of crop origin, we can  identify changes in the crop plant-associated microbial diversity in other regions of the world where these plants have been introduced. 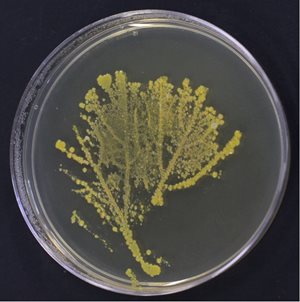 Humans have carried crops domesticated in Mexico (especially milpa crops) around the world, and they are now grown in diverse geographic areas far from their center of origin in Central Mexico. Corn alone is one of the three most important world grains. But as these milpa crops have been transplanted around the world, did we inadvertently leave anything behind? Which rhizosphere microbial mutualists are still dwelling in the region of origin soil? Which locally endemic leaf or stem endophytes are providing defense against pathogens and herbivores, but only in the geographic region of origin? Which beneficial insects, such as natural enemies and pollinators, are only found in the area where the crop plant is native? How did the beneficial microbial communities of milpa crops change now that they are grown in monocultures and not traditional polycultures? To answer these questions will take many years, many discussions over fermented beverages, and many dedicated collaborators. Our next step in the Global Crop Mutualist Alliance is in Hanoi, Vietnam Sept 2-9 for the CIAT Biocontrol course. Stay tuned for more updates, and eventually, results!

We want your help! Are you interested in contributing your crop plant associated microbes or insects to this project? Write to me for instructions on how to participate, including seeds to start your own home garden.

All images, unless noted otherwise, taken by: Lori Shapiro. 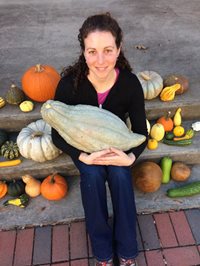 Lori R. Shapiro is a post doctoral researcher co-advised in Rob Dunn's laboratory at North Carolina State University and Roberto Kolter's laboratory at Harvard Medical School. Her research focuses on understanding the role of human mediated ecological changes in the emergence and host associations of the plant pathogen Erwinia tracheiphila