Most mBiosphere readers will know that Listeria monocytogenes is a foodborne pathogen that can be eliminated by proper food prep: washing raw produce and cooking meat. Ensuring Listeria doesn’t contaminate food prep surfaces is also important, especially in large industrial settings where food is packaged before being sent to grocery stores. A new Applied and Environmental Microbiology report suggests that L. monocytogenes can survive exposure to cleaning and disinfecting agents in these industrial settings, possibly contaminating the food items being prepared.

The study focused on the effects of cleaning agents used on conveyor belts in meat processing plants, peracetic acid (PAA) and quaternary ammonium compounds (QAC). These types of cleaning agents kill bacteria by disrupting their membranes, according to tests on bacteria grown in planktonic cultures. The scientific team, led by first author Annette Fagerlund and senior scientist Solveig Langsrud, wanted to test the efficacy of these agents on bacteria in biofilm cultures, since biofilms are naturally more resistant to many harsh conditions.

The scientific team used small pieces of the same material as the conveyor belt to grow either single-species L. monocytogenes or mixed-species biofilm cultures. After 4 days of growth, the biofilms received 3 days of cleaning and disinfecting with either PAA or QAC agents representative of those used in industrial formulations, or were just rinsed with water. When the cultures were assessed after these 7 days, the research team saw no difference in bacterial numbers between the control or treated samples—and no difference between pre- and post-treatment bacterial numbers! 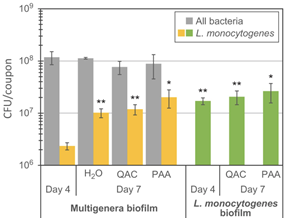 Total numbers of bacteria in biofilms before (Day 4) and after (Day 7) cleaning & disinfection. Source.

Importantly, while the bacterial numbers stayed the same, the composition of multispecies biofilms changed with cleaning treatments. After treatment, even with water, the proportion of L. monocytogenes in the biofilm increased approximately 10-fold (see figure, right), despite the susceptibility of the same Listeria strains to PAA or QAC when grown in planktonic culture. The team went on to show that biofilms are more likely to adhere to the underside than the top face of the conveyor belt, probably because the two sides are made of different materials (the bottom is urethane-impregnated woven polyester fabric, while the top is polyvinyl chloride). Although the bottom surfaces were not designed to directly interact with food, biofilms on them could serve as sources of contamination issue during the food handling process.

The microbiota of conveyor belts in food preparation plants is dominated by nonpathogenic microbe, providing a slight relief that these surfaces aren’t a constant source of contamination. However, the resilience of biofilms, and particularly of Listeria, to the cleaning treatments likely means a change is needed in the cleaning and disinfecting regimens used in industrial settings.