Defining species can be complicated for all microbial types, but categorizing the fungal world adds additional layers of complexity. Some fungi have sexual cycles, some reproduce clonally, and some are capable of both sexual and asexual reproduction; this makes the biological concept of species (can two individuals mate and produce viable offspring) a difficult measure. Many categorizations have relied on microscopic and biochemical characterizations, the foundations for microbial taxonomy, but similar phenotypes can emerge from very different genotypes. Comparing the internal transcribed spacer (ITS) sequences has allowed molecular differentiation of fungal types, but using single (or even several) short sequences can confound groupings. As sequencing has become easier and cheaper, diversity has become easier to parse across larger portions of the genome. Whole-genome sequencing has made delineating common ancestry based on the entire genome even easier, and scientists have now used this technique to show that the fungus Histoplasma capsulatum is actually comprised of several unique lineages, as reported in mBio.

The authors call on these new lineages to be labeled as unique species, and they provide several lines of evidence to support their proposal. In their work, they sequenced entire genomes of 30 isolates with unique geographical and phenotypical characteristics. Measuring the samples’ relatedness using principal-component analysis (PCA) revealed that the isolates separated into genetic clusters, which varied in their allele frequency. Many gene variants were found only within a cluster, not shared between clusters, suggesting these groups are genetically isolated. 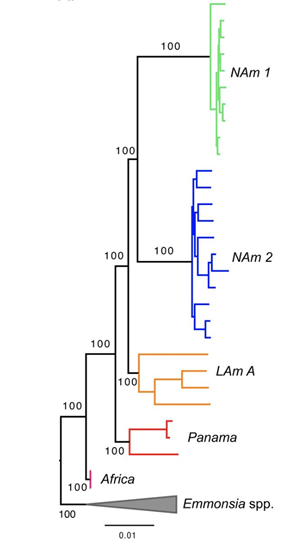 But do these genetically isolated clusters represent species? By comparing sequences with closely related Emmonsia parva and E. crescens species, the authors generated phylogenetic trees that suggest species relationships (see figure, right). Further analyses showed the relatedness within and between these different lineages to be sufficient for reclassification as separate species. "This study confirms that the Histoplasma genus is composed of more than one species, even though all strains have been labeled ‘Histoplasma capsulatum’ for over 100 years,” said study lead author Victoria Sepúlveda. “This is the first study that used total genomic sequencing and population genetic analyses to formally distinguish four species for Histoplasma.”

Dividing the Histoplasma genus into several species confirms long-observed differences between Histoplasma strains. “We’ve known for a long time that among Histoplasma strains, there are major differences in cell wall composition, virulence-related characteristics, geographic origin, et cetera,” said Sepúlveda, who collaborated on this study with senior scientists Daniel Matute and William Goldman. These four species may not represent the entirety of Histoplasma diversity, either. “There are probably even more species once we start to look at strains outside the western hemisphere.”

Categorizing species helps scientists to understand their evolution and the diversity of the world, but also has practical implications in the clinic. “The identification of new species could guide the discovery of virulence strategies and aid the design of species-specific diagnoses and treatments,” said Sepúlveda. Such is the case for another human pathogenic fungus, Cryptococcus, where longstanding serogroup characterization correlated with patient outcome, which eventually led to proposals for Cryptococcus species recategorization. Clinicians report that bacterial species definitions can also be confounding: Neisseria meningitidis contains such broadly different virulence characteristics that “the textbook niche specification of Neisseria species are too narrow.” How a species is classified is import to more than taxonomy, as species nomenclature can influence infection management, directly relating how our conception of microbial species to patient care. As sequencing technologies become yet more accessible and sophisticated, other microbial species may be redefined using the same techniques applied used here with Histoplasma, revealing still greater diversity in the microbial world.