The Mycobiome, Fungal Dysbiosis, and Health in the Gut 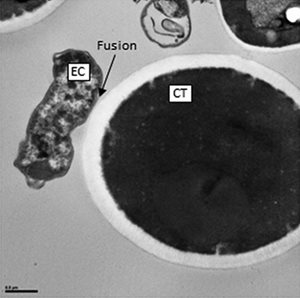 Transmission electron microscopy showing the interaction of Candida tropicalis and E. coli within a biofilm. Source.

The mammalian gut harbors a dense and vastly diverse microbial community, known as the microbiome. The majority of human microbiome studies have primarily focused on bacterial organisms, with less focus on fungi in this population. While the fact that commensal fungal species live within and on the human body has been known for decades, the first attempt to comprehensively characterize the mycobiome (the fungal organisms of the microbiome) was not published until 2010. Throughout the past decade, gut mycobiome studies have greatly increased in frequency. Advances in detection and characterization techniques are now allowing researchers to uncover the importance of the fungal members of the intestinal community.

Metagenomic sequencing analysis has revealed that approximately 99% of the genes in the gut microbiome are of bacterial origins, while less than 0.1% are from fungi. Where do these fungi come from? Fungal colonization of the gastrointestinal (GI) tract begins at birth via transfer from mother to child. A number of fungal organisms are also acquired through our diets and other environmental sources. Collectively, scientists have identified over 267 different fungal species that inhabit the human GI tract at some point in time. However, the ubiquity of environmental fungi has made it difficult to determine whether some species are permanent gut dwellers or if they are simply passing through at the time of analysis. Despite this, numerous advances have been made in understanding the impact of the gut mycobiome on human health.

The Usual (and Unusual) Suspects

Investigations of bacteria within the microbiome have revealed a “core” set of bacterial species that are found in the guts of healthy individuals. The mycobiome, however, has no defined set of fungi with which to distinguish healthy versus unhealthy people. While there is no core group of fungal species, a few species have been repeatedly found to inhabit the guts of most healthy individuals.

Candida species have been the most detected fungal species throughout mycobiome studies, with over 20 representatives found in the human gut to date. Candida albicans is one of the most commonly isolated and studied members of the mycobiome. This commensal organism and opportunistic pathogen is found in multiple locations in the body in addition to the GI tract. Candida species have been found to form biofilms on host tissues and/or medical devices. Notably, biofilm formation by C. albicans as well as C. tropicalis, C. parapsilosis, and C. glabrata has been implicated in a number of human diseases.

Another common fungal species of the gut mycobiome is Saccharomyces cerevisiae, which is more commonly referred to as baker’s yeast or brewer’s yeast. Because of its prevalence in foods and beverages, S. cerevisiae is likely to be a foodborne colonizer of the gut. Interestingly, a variant of S. cerevisiae (S. boulardii) can serve as a probiotic when administered therapeutically, and actually provides protection against multiple gastrointestinal diseases.

The abundance of either specific fungal species within the gut or of the entire gut mycobiome varies under a number of conditions and is associated with different disease states. This alteration of the mycobiome from homeostasis, leading to imbalances in inter-microbial ratios within the microbiome, is known as dysbiosis.

Fungal dysbiosis has been implicated in diseases within different parts of the body aside from the gut, such as vaginal yeast infections, cystic fibrosis in the lungs, and fungal skin infections. The overgrowth of fungal species, which is characteristic of these diseases can be triggered by antibiotic use or can even be a manifestation of a compromised immune system.

Within the gut, an imbalance of fungal species has been most frequently associated with inflammatory bowel diseases (IBDs), such as Crohn’s disease and ulcerative colitis. In a 2016 study, Sokol and colleagues investigated the association of IBDs and the mycobiome. Their findings revealed that IBD patients displayed imbalances in the fungal communities within their guts compared to healthy controls, including an increase in the proportion of C. albicans and a decreased proportion of S. cerevisiae. Although these findings are significant, to get to the heart of the matter, we need to answer one key question: Is dysbiosis of the gut mycobiota the cause or the consequence of these diseases?

While this question has yet to be answered, there are a number of conditions that result in dysbiosis of the gut mycobiome. Just as in other niches, the microbiome of the GI tract is greatly influenced by administration of antibiotics. In both mice and humans, treatment with broad-spectrum antibiotics results in overgrowth of C. albicans, suggesting that bacteria in the gut microbiome help to keep the fungal species there in check. A 2016 study showed that treatment of mice with antifungals led not only to depletion of some fungal species and outgrowth of others, but also to changes in the bacterial composition of the gut microbiome. This suggests that the bacteria and fungi within the gut maintain a very fine balance, with the homeostasis of one depending on that of the other. In fact, multiple analyses of the gut bacteriome and the mycobiome have further revealed the importance of this bacterial-fungal balance, showing that some fungal species are actually correlated with different bacterial species within the guts of patients with Crohn’s disease.

While imbalances in the mycobiome have often been associated with different disease states, one recent study sought to determine the protective capacity of individual fungi of the mycobiome. Using a colitis mouse model, the researchers first depleted bacteria from mouse intestines with antibiotics, then restored them with either C. albicans or S. cerevisiae. Amazingly, the presence of either of these fungal species alone in the guts of mice was able to provide mice with the protection that is normally conferred by bacteria against colitis symptoms. The protective capacity of C. albicans in this study is quite fascinating given its pathogenic nature in other contexts such as IBD. It will be interesting to see what comes from these findings, which provide a basis for the potential benefits of the gut mycobiome.

Although the mycobiome makes up less than 0.1% of the total genomic composition of the gut microbiome, researchers have begun to uncover the large contribution that this relatively small population has on human health. While the specific roles of the gut mycobiome in protection from or involvement in various diseases remains unclear, future studies of this unique microbial population are sure to provide exciting new insights.

Erica Bizzell received her Ph.D. in Microbiology and Molecular Genetics at Emory University. She is interested in all things microbial, and has a passion for increasing science literacy and engagement. You can follow her on Twitter at @E_Bizzell.