Yersinia pestis: Resurgence of the Black Plague in Madagascar 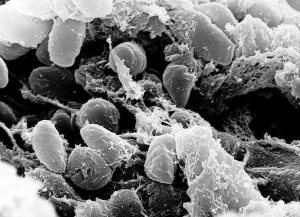 A scanning electron micrograph depicting a mass of Yersinia pestis bacteria in the foregut of an infected flea. Source.

On the island of Madagascar, we are seeing an unusual epidemic of plague caused by Yersinia Pestis, a bacterium most famous for decimating a third of Europe’s population in the Black Plague. The unique characteristics of Y. pestis have led to devastating epidemics of the plague in the past that, at times, have greatly influenced the course of human history.

Yersinia pestis is a gram-negative, nonsporulating coccobacillus that typically infects rodents. Its unique lifestyle adaptations foreshadow its pathogenic potential: the pathogenic cycle involves humans, rodents, and fleas. Y. pestis can cause bubonic plague in the lymph nodes, pneumonic plague in the lungs, and septicemic plague in the bloodstream. Several unique structural aspects of the bacterial outer surface help it to avoid immune detection while infecting a human host.

The bacterium first reaches humans via a bite from a flea (Xenopsylla cheopi). During transmission, we can see one of its unique structural features in action: when Y. pestis is introduced to the mammal’s bloodstream (warmer than its host flea), its lipid A protein, which resides on the LPS chain, switches from a hexa-acylated to a tetra-acylated form. This tetra-acylated form is 500 times less likely to be recognized by Toll-like-receptors (TLR) on human immune cells than the lipid A modifications of other Yersinia species. The lowered immune detection means a higher concentration of bacteria in the blood is required to incite a toxic response, allowing bacteria to multiply without detection and, eventually, leading to sepsis and death.

Another unique structural feature of its short, rough Lipopolysaccharide (LPS) chain is the lack of an O-antigen. In most gram-negative bacteria, O-antigen serves to evade the host’s complement-mediated phagocytosis. Y. pestis instead modifies its LPS using an extracellular Pla protease that is typically inhibited by the O-antigen. With this protease active, Y. pestis is able to cleave plasminogen to plasmin, degrading fibrin clots and weakening extracellular matrix proteins like laminin and fibronectin. Pla also cleaves the C3 protein, part of our complement system, to prevent complement-mediated phagocytosis.

What seemed like mountains of dead were thrown into the city, and the Christians could not hide or flee or escape from them... the stench was so overwhelming that hardly one in several thousand was able to flee. Moreover, one infected man could carry the poison to others, and infect people and places with the disease by look alone. No one knew, or could discover, a means of defense

While much is known about its pathophysiology, no discussion of Y. pestis is complete without an appreciation for its effect on human history. There is evidence to suggest its presence in The Old Testament, in which an epidemic destroys the Philistines, with infected lymph nodes referred to as “tumours” caused by “dead rats.” A better documented example is the Justinian Plague of 526CE. This plague rocked the Byzantine Empire, decimating its military, citizenry economy and causing wide-ranging effects that were felt for centuries. Bubonic plague has also been weaponized into one of the most destructive uses of biological warfare in human history: during the siege of Caffa (in what is now Ukraine) in 1346, the Mongol army catapulted corpses of those who had died from the disease into the city. This event may have contributed to the outbreak of the Black Plague in Europe. Caffa was a Genose trading center, and De’ Mussi relates that

Among those who escaped from Caffa by boat were a few sailors who had been infected with the poisonous disease. Some boats were bound for Genoa, others went to Venice and to other Christian areas. When the sailors reached these places and mixed with the people there, it was as if they had brought evil spirits with them: every city, every settlement, every place was poisoned by the contagious pestilence...

One reason Y. pestis is so lethal is that it travels quickly and efficiently via its flea vector. This is partially due to its unique biofilm adaptation. The flea’s digestive tract contains a structure called the proventriculus, which serves as a valve between its midgut and esophagus. When it feeds, this valve rhythmically contracts to prevent backflow. When Y. pestis infects the flea, it does not infect the gut epithelium like most other bacteria. Instead, it forms clusters in the proventriculus, housing itself in a biofilm coated with an extracellular polymeric substance. This biofilm adheres to the hydrophobic regions of the proventricular lining, protecting it from being washed away during digestion. This allows Y. pestis to multiply freely in the flea, and prevents significant excretion.

Y. pestis has evolved these adaptations over time to continue its reign as one of the deadliest bacteria in the history of our species. Its unique ability to infect and kill has devastated entire armies, economies, and civilizations. Advances in medicine and public health now far surpass the approaches of the Philistines, Byzantines, and 14th-century Europeans and give hope that this latest outbreak of the plague can be contained, its victims cured, and its spread curtailed.

No standing; no spitting; don’t throw your trash
– sign outside houses in Antananarivo, Madagascar

Madagascar has seen the plague before, as Y. pestis is endemic to the region, but the severity of the current outbreak far outpaces previous outbreaks. Based on the World Health Organization’s data, between August 1 and November 22, 2017, there were 2,348 cases with 202 deaths in Madagascar alone. The majority (1,791 cases) have been cases of pneumonic plague.

Unlike other plague forms, pneumonic plague is easily transmitted from person to person via air droplets. It is the deadliest and fastest progressing form of plague, with a 100% mortality rate without treatment and the ability to kill a patient in a day. Luckily, several antibiotic regimens can help treat this disease. But with pneumonic plague, not only do those with the disease need treatment, everybody who may have been exposed needs prophylactic post-exposure treatment. Madagascar is fighting the spread of this disease with a massive public health effort to keep their streets clean in order to minimize spreading of the disease. 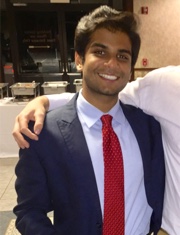 Nisarg Bakshi is a medical student at Ohio University Heritage College of Osteopathic Medicine. He graduated from the University of Cincinnati with degrees in Neurobiology, Biology, and Creative Writing. He hosts a podcast, Rotations, on iTunes and Youtube. You can also follow him on Twitter @NisargBakshi to read mostly sports-related meltdowns.