In September 2016, the Food and Drug Administration (FDA) published an article barring consumers from purchasing and using certain antibacterial soaps. The article described the scientific evidence supporting disuse of antibacterial products, including liquid, foam, gel hand soaps, bar soaps, and body washes. We now know that antibacterial soaps do not protect from preventable illness better than regular soap, but beyond that, some of these products are even shown to have deleterious long-term effects. In June 1994, the FDA ruled that antiseptic products may claim only that they “help reduce bacteria that potentially cause disease.” They may not claim a product “kills micro-organisms.”

In spite of these findings, the use of decidedly coercive advertising language continues to lure naturally protective parents into misleading purchases. For instance, if you walk down the aisle at the grocery store, you will still see antibacterial soaps that claim to “kill 99.99% of germs.” Microbiologists know that hand sanitizers cannot kill spore-generating microbes like Clostridium difficile, but these hand sanitizers might not even be killing 50% of bacteria, despite their claims. One microbiologist in Ontario showed that just 46%-60% of bacteria were killed on the hands of eighth graders. While choosing which soap to purchase, it’s important to remember that each bug can develop novel and insidious defenses—no matter what that bottle of soap claims.

The Treacherous Two: Triclosan and Triclocarban

After the FDA decision, triclosan and triclocarban were officially removed from over-the-counter products like hand soap and body wash in September 2016. The ban affects liquid, foam, gel hand soaps, bar soaps and body washes, as well as plastics and textiles (for example, this year marks 20 years since the Hasbro company was fined for false advertising, claiming their Playskool toys laden with the antimicrobial chemical triclosan would keep kids healthier).

Due to improper use, triclosan and tricloclocarban are directly responsible for increasing the incidence of antimicrobial resistance, and were therefore banned by the FDA. At bactericidal concentrations, triclosan disrupts bacterial cell walls and induces lysis. Sublethal concentrations of triclosan actually increase resistance to the drug. Resistance to these compounds has been observed in dermal, intestinal, and environmental microorganisms, due to either cross-resistance or co-resistance mechanisms. These effects were observed in clinically relevant organisms such as Escherichia coli and Salmonella enterica. But triclosan also has been shown to alter hormone regulation in animals, contribute to development of antibiotic-resistant bacteria, and cause harm to the immune system, leading the FDA to conclude it confers more harm than benefit to human health. Interestingly, triclosan can remain in Colgate brand toothpaste, because the cost-benefit ratio for plaque reduction and gingivitis protection was favorable in the eyes of the FDA.

A new article suggests improperly used antibiotics may promote antimicrobial resistance and biofilms. A recent study in mSphere analyzed the role of beta-lactam antibiotics in Haemophilus influenzae bacteria. Biofilms have been defined  as “an assemblage of surface-associated microbial cells enclosed in an extracellular polymeric substance matrix.” The mSphere study showed  that cultures exposed to sublethal beta-lactam antibiotics may establish resistance by increasing biofilm production, making the infection more difficult to treat and increasing the risk for development of resistance. Further, biofilm formation by “nontypeable” (lacking capsular serotypes) Haemophilus influenzae may have a role in the pathogenesis of otitis media and community-acquired pneumonia.

Although our ability to predict the emergence of bacterial resistance is limited experimentally, nontypeable H. influenzae is an opportunistic pathogen that has been used for in vitro study. Biofilms are often found in bacterial infections in human hosts, and nontypeable H. influenzae was first visualized via immunofluorescent staining after tympanostomy (inner ear biopsy) from children with otitis media. It has also been visualized in children with cystic fibrosis and bronchiectasis. To explore the mechanisms of biofilm formation, Marti et al. carried out Tn-Seq analysis which demonstrated that disruption of peptidoglycan synthesis can lead to biofilm formation by increasing sensitivity to bacterial lysis and releasing bacterial DNA into the environment. Further, sublethal concentrations of cefuroxime, a beta-lactam antibiotic, allowed nontypeable H. influenzae to increase biofilm formation. Antibiotics of the same class, including amoxicillin-clavulonic acid, ampicillin, and penicillin-G, had similar biofilm-increasing effects (but other classes did not). 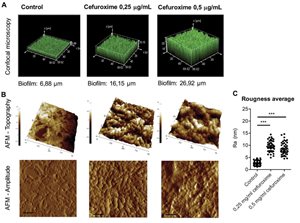 Molecular analysis of the microbial “resistome” have shed light on the vehicles of microbial resistance. Several mechanisms have been described, including enzymatic inactivation of the antibiotic, prevention of accumulation of lethal intracellular concentrations of the antibiotic through efflux pumps, and others. Bengtsson-Palme et al. described alterations in the taxonomic composition of gut microbes in over 300 antibiotic resistance genes, developing a resistome of core high-abundance genes with relatively few low-abundant genes that conferred resistance toward sulfonamides, trimethoprim, and beta-lactams. Resistance genes or gene families have also been assayed in metagenomics studies, enabling the cumulative analysis of total bacterial communities. This negates the necessity for specific primer design or and obviates the requirement for lab cultures of non-cultivable  species. However, there are still some drawbacks: resistome assays are often skewed toward known genes. Nonetheless, metagenomic analysis of  large-scale microbial communities has provided many novel insights into the resistome.

Microbial resistance has been detected almost since the time antimicrobial agents were derived—for example, Staphylococcus was discovered in 1928, and penicillin-resistant Staphylococcus was documented in 1940. Antimicrobial agents have reduced mortality rates throughout the world since their discovery, but the growing issue of antimicrobial resistance threatens the efficacy of established pharmaceutical therapies. According to the Centers for Disease Control and Prevention (CDC), at least 2 million Americans become infected with antibiotic-resistant bacteria and at least 23,000 die each year as a direct result of these infections. Resistance is now a considerable factor in disease incidence; for example, the majority of pediatric emergency room visits are still attributed to antibiotic misuse. Consistent with the aforementioned mSphere article by Marti et al., beta-lactams are under scrutiny for inducing antimicrobial resistance when administered in sub-lethal doses. In the world of antimicrobial resistance, beta-lactam antibiotics are a household name—indeed, an entire class of antibiotics is required for medical school curricula (you may be familiar with penicillins and cephalosporins).

Keep Washing With Soap and Water

The science shows: your best bet is still plain soap and water. If soap and water are not available, hand sanitizer with an alcohol concentration of 60-95% is also a good option.