You’re in Control: Talking with the First mSphereDirect-Published Author

The American Society for Microbiology recently initiated an author-directed route of publication for its journal mSphere, called mSphereDirect. This new publishing route allows authors to choose their reviewers ahead of submission, changing the dynamic between authors and their reviewers. Authors who submit via mSphereDirect are promised a fast turnaround: five days maximum from submission to decision. The first scientific report was recently accepted from an mSphereDirect submission, and we at ASM asked the senior scientist, Pat Schloss, about his experience.

Pat Schloss: It’s always a struggle to figure out where we should submit our manuscripts, so I'm constantly on the look out for interesting opportunities and publishing models that are a little different. In both cases, we had manuscripts that I thought would be a perfect fit for the publishing model and we went with it. In the first case, we had a manuscript that had been languishing on the desk of an editor of another journal without going back out for review. Thankfully, mSphere has a track where they take reviews from other journals and use those to help make a decision. That helped us get a paper accepted within days of the journal starting to accept submissions.

In this case, we had a paper that we were working on and was beginning to think about possible journals. When I heard about mSphereDirect, I knew this would be the paper to submit since I’d be finishing it up at about the time they’d be taking submissions. So there was a lot of good timing, along with a willingness on both my part and mSphere’s to try something different. I have great loyalty to ASM journals and am grateful for what publishing in them has done for my career. I’m always happy to help with the small bullhorn I have to encourage people to try these innovative approaches.

ASM: There’s many ways mSphereDirect might benefit scientists and scientific publications. Was there a major reason why you decided to try it? 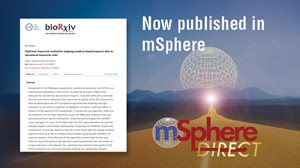 mSphere has its first accepted manuscript via the mSphereDirect submission route.

PS: I think the thing that most attracted me was that it really breaks down the adversarial nature of publishing. There are internet memes about the Third Reviewer or the reviewer that wants you to do their experiment instead of yours. But, if I directly ask someone to review something for me, they are going to be constructive. I really experienced that with this process. We got two experts in the field that I respect – Katie Pollard and Mick Watson – to review the manuscript. Although there are always going to be areas that a reviewer may encourage you to pursue in future drafts, this format allowed us to have a discussion about those areas. It was nice to have a quick turnaround once I submitted the manuscript, but ultimately, it really was about the discussion and the ability to tap respected researchers in the field that would engage us in a discussion.

ASM: How many people did you contact as possible reviewers? Given that the process is new and its transparent nature means their names will be publicly available, did you have difficulty getting people to sign up?

PS: This was a shock to me. I’m an editor at Applied & Environmental Microbiology and regularly have to ask 5 or 6 people to get two reviews. It really wasn’t any different with this manuscript. We asked 5 people, we nagged reviewers. We even had the author submit the manuscript to the reviewers right before Christmas! If you want to know what it’s like to be an editor for a journal, this is the path for you!

ASM: Was it difficult to find reviewers who fit the stringent requirements for mSphereDirect peer review? What was the reaction of those that you asked – were they familiar with mSphereDirect?

PS: It was! I was really shocked at how the requirements for mSphereDirect reviewers is more stringent than what we ask of reviewers at other journals. Plus, I felt the need to be more stringent than was required. I do worry about the perception that a tenured professor can push around more junior people to give a favorable decision. It was important to me to only ask reviewers that were a parallel academic rank to me to not create that imbalance. I think the format was new to them. In one case, Mick Watson, he has a reputation for favoring things like open peer review (where you reveal your name [like mSphereDirect] to the authors). I haven’t asked him what he thinks of this format, but I thought he would be more likely to go for it than other possible reviewers.

ASM: Did you feel that the reviewers could rigorously assess the scientific quality despite the process being unblinded?

PS: I do. Again, based on their reputation and the actual reviews I got back, it was clear that they were being rigorous.

ASM: Were you satisfied with the feedback you received? Did you feel the feedback was different than if you had submitted to a traditional peer review?

PS: The overall process was quite a bit different. When you respond to critiques for a traditional paper, you’re never quite sure what is important and what isn’t, what you can get away with ignoring and what you can’t. One of the reviewers’ comments wasn’t clear about what they wanted. We probably exchanged 2 or 3 emails before I understood what they were after. If this were a traditional paper, the editor would be the arbitrator of the back and forth and so either the reviewers’ request would have been unfulfilled or we would have had a lengthy back and forth over a relatively simple issue.

ASM: Who is the first author on this paper? Did they have a say in submitting via mSphereDirect? What was his/her opinion?

PS: The first author was Sarah Westcott. Sarah is a bioinformaticists who has worked for me now for over 10 years. She does most of the work in developing and maintaining a software package called mothur. She had developed this new method and we were anxious to get it out into the next release of the software package. She appreciated the ability to post the method as a preprint and get a quick turnaround so that we were putting out a new method that had a paper to back it up.

ASM: Would you recommend it to fellow researchers? Who benefits most from submitting research papers through this route?

PS: I would absolutely recommend it to other scientists. I think it would be most useful for people that bridge different disciplines. We bridge microbiology and bioinformatics in this paper. So finding people that understand both the methods behind the tool and how the tool would be applied was critical. I don’t know that a typical editorial process would have captured that nuance. I suspect most of the time when we complain about a reviewer not understanding our work, it is because we wrote poorly – but I also think a big part of that is selecting the wrong reviewers.

We would for sure do it again. I’m not sure why, but I was surprised by how similar the mechanics of getting reviewers, getting them to submit their reviews, and so forth was to the traditional model. The big difference was that I was in control of the process and knew that at the end of it, the final manuscript would be the product of a dialogue between the authors and the reviewers. I suspect the process may undergo further tweaks, possibly including the references themselves or tweaks to the requirements of who can be a reviewer, but I think the model is a good one. I really hope we see it spread to other ASM journals and then beyond.