Star Wars – an epic story of war between the forces of good and evil in a galaxy far, far away. The Death Star – the ultimate weapon of destruction. The story is science fiction, but it could be considered an analogy for the constant battle between our immune system and microbial pathogens. Believe it or not, there is a lot of similarity between the Star Wars saga and the battle that rages in AIDS patients with cryptococcal meningitis. 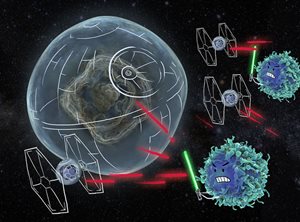 Inside our bodies, a constant battle rages between our immune system and millions of tiny invaders. Some of those invaders are fairly harmless, but occasionally the invaders are less innocuous and can attack the very foundation of our defenses. Human immunodeficiency virus (HIV) attacks the very cells that organize our immune defenses – the CD4+ T-cells. If the CD4+ T-cells are the Jedi in Star Wars, then HIV carries out the Jedi Temple Massacre, in which the Jedi are defeated and nearly wiped out. Uncontrolled HIV causes massive damage, leaving the immune system hobbled and ineffective.

Picture the depleted immune system as the Rebel Alliance somewhere between Episode III, Revenge of the Sith, and Episode IV, A New Hope. The Jedi (CD4+ T cells) have been defeated and nearly wiped out. The rebels (the remaining immune cells) are in hiding, leaving an opportunity for the Empire to move in and take over. Enter the pathogen Cryptococcus neoformans, a yeast-shaped fungus found in soil, trees, and bird guano. To the HIV-infected immune system, C. neoformans is the Empire. Few CD4+ cells (Jedi) remain to keep the infection contained, so C. neoformans is able to replicate, grow, and strengthen. 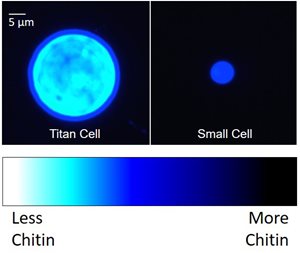 Like the Empire in the Star Wars saga, C. neoformans also has the ultimate weapon – “titan” cells. Typical C. neoformans cells in the environment are small, only 5-7 microns in size (compare this to immune cells, which range from 10-20 microns). However, when inhaled into the lungs, 20-30% of the C. neoformans cells grow and change. Titan cells can be up to 100 microns in size, dwarfing the immune cells meant to kill this invading pathogen. Sounds like the Death Star, right? The similarities don’t end there. Titan cells are resistant to antifungal drugs and have a thickened cell wall (see figure, right). The increased chitin in the titan cell wall confuses the immune system, resulting in the production of an ineffective immune response. This ineffective response means the titan cells also protect the rest of the small C. neoformans cells (Storm Troopers) from being destroyed by the host immune cells. More interestingly, the titan cells produce typical-sized daughter cells that are better adapted to host stresses. These daughter cells can be considered the TIE fighters released by the Death Star, spreading havoc wherever they go. The small daughter cells can disseminate throughout the human body, ultimately crossing the blood-brain barrier to cause deadly meningitis.

In the Star Wars saga, the Rebel Alliance is able to break into the data center on Scarif, steal the plans for the Death Star, identify the thermal exhaust as a weakness that can be exploited, and ultimately destroy the Empire’s most powerful weapon. Unlike the Rebel Alliance, we don’t yet know how to defeat the titan cells. We have yet to discover the critical titan cell vulnerabilities. Yet we have made great strides in understanding why C. neoformans is so difficult to defeat in this epic war. Although it can seem impossible to fight this fungal empire, we have hope. The resistance continues. Perhaps in the not too distant future we will be able destroy C. neoformans titan cells, win the battle against HIV, and restore balance to the immune system.

To learn more about HIV, C. neoformans, and titan cells, check out these articles: 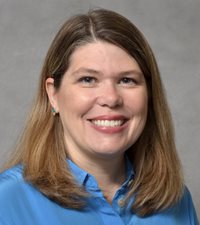 Kirsten Nielsen is an Associate Professor in the Department of Microbiology and Immunology at the University of Minnesota. Her research program focuses on understanding how fungal pathogens cause disease. 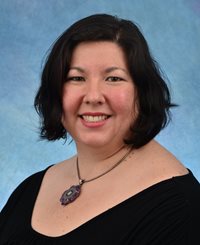 Laura Okagaki-Vraspir is an associate with HWC Inc, a consulting firm specializing in advancing the nation's public health preparedness, homeland security, and emergency management missions. She currently works with federal and local agencies on bioterrorism preparedness and response. Laura also enjoys public outreach and communicating complex scientific concepts to a general audience. You can follow her on twitter @DrLOV_PhD