Interpreting the Uninterpretable: Testing Drug/Bug Combinations without a Breakpoint

Some conversations I have with clinical colleagues are difficult, to say the least. Here's one I had just recently:

Clinical team: "Can you test colistin for our patient's carbapenem-resistant Enterobacteriaceae?"

Me: "Sure, we can do that—but there's no clinical breakpoint."

Clinical team: "What does that mean?"

Me: "We could give you an MIC, but there's no way to interpret that MIC as resistant or susceptible..."

Me (now excited): "But wait! There's this new thing, called an 'epidemiological cut-off value,' that was just established for colistin! We could use it to tell you if the MIC for your patient's CRE is consistent with acquired or mutational resistance mechanisms."

Clinical team: "...What does that mean?"

This illustrates one of the frustrating challenges encountered by both labs and clinicians when it comes to susceptibility testing: the absence of clinical breakpoints. There are (better) ways to deal with this scenario than this, so I thought I'd go over my approach, and highlight some resources to help you with this situation.

Let's start by clarifying a couple of things. A clinical "breakpoint" is the minimum inhibitory concentration (MIC*) value that delineates antimicrobial susceptibility categories for a given drug/bug combination. In other words, the breakpoints are the MIC values that differentiate susceptible, intermediate and resistant (etc.) categories, from the continuous MIC data—sort of like a speed limit for susceptibility testing. These categories, in turn, predict likelihood of clinical response: either likely to be favorable (susceptible) or unfavorable (resistant), or somewhere in between (intermediate/susceptible-dose dependent, which might be favorable, if higher doses or more frequent dosing regimens are used). The Clinical and Laboratory Standards Institute (CLSI) has very strict rules that guide how breakpoints are established, which you can read all about in the M23-A4 document, if you are so inclined. I can save you some time—it boils down to three essential elements: the MIC distribution for the drug/bug (also known as the epidemiological cutoff; more on this below); pharmacokinetic-pharmacodynamic data on the drug; and clinical outcome data for patients infected by the bug and treated with the drug. 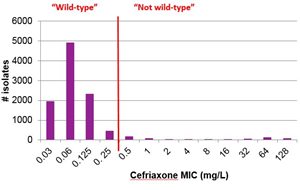 The MIC distribution is an important component of establishing a clinical breakpoint. In this example, the MICs of >9000 E. coli isolates to ceftriaxone are plotted. From this data, the ECV can be established - to differentiate "wild-type" (MIC <=0.25 μg/mL) and "not wild-type" (MIC >0.25 μg/mL). The CLSI clinical breakpoint for susceptibility is <=1 μg/mL, meaning PK/PD and clinical outcome data predict isolates with MICs of 0.5 and 1.0 μg/mL are treatable with ceftriaxone, even though they have some form of resistance.

Believe it or not, there is very often an absence of clinical outcome data, in particular for older drugs, even if they are commonly used (e.g., azithromycin for Salmonella Typhi). No one wants to publish a case series of treatment failures, after all. Sometimes, we also don't have PK/PD data ... and so are left with just the MIC distribution (see example in the figure, right). Back in the good old days, MIC distributions were the only data used to establish a breakpoint (in smoky rooms over good whisky, I like to imagine.) Even today, MIC distributions can be the predominant piece of data used in establishing breakpoints—for example, the majority of breakpoints in the CLSI M45 "Infrequently encountered and fastidious bacteria" tables are based almost entirely on MIC distributions (which, as an aside, is why this document is a guideline and not a standard like M100).

Relatively recently, the concept of a new interpretive category based solely on MIC distributions was introduced to the CLSI documents. This is the epidemiological cut-off value (ECV). In Europe, it's the called an ECOFF. In essence, an ECV uses statistical modeling (or, the very scientific "eyeball" method) to define a cutoff value (breakpoint) that delineates wild type from non-wild type (i.e., those isolates with or without acquired or mutational resistance mechanisms). Let's be clear, though:  a "wild-type" MIC doesn't necessarily mean that the isolate is susceptible, nor does a "non-wild-type MIC" mean it's resistant. For example, the E. coli clinical breakpoint for susceptibility for cefazolin in non-cystitis infections is ≤1 µg/mL and the ECV is ≤8 µg/mL. Isolates with MICs of 2 or 4 µg/mL are "wild-type," but PK/PD predicts a poor clinical outcome with these MICs. Another example: ceftriaxone, for which the susceptible breakpoint for E. coli is ≤1 µg/mL and the ECV is ≤0.25 µg/mL. This case is a bit easier to understand—essentially, with routine dosing, you can overcome low-level resistance to ceftriaxone. As the PK/PD mafia likes to say, "It's the MIC, stupid (and not the resistance mechanism), that predicts clinical response."

The ECV was designed to help public health authorities track antibiotic resistance. As an example, CLSI is working on N. gonorrhoeae ECVs for several drugs, to help monitor emerging resistance. You may think, "Well, that doesn't help me in the clinical lab." And you are right—it doesn't. Except ... maybe it can. EUCAST, for example, recommends that you consider using the ECV to determine whether the MIC is consistent with wild type, and then to compare that MIC with similar species with clinical breakpoints for that drug. (Settle down-- it's a reasonable thing to think about—M45, after all, is based on this principle). In my discussion above, let's say our lab got a colistin MIC of 0.25 µg/mL for the CRE. Assuming we used a colistin testing method that works (see my last post), you could interpret this as "wild type," with the ECV of ≤2 µg/mL. Then you could see that all gram-negative bacteria with a clinical breakpoint to colistin (Pseudomonas aeruginosa and Acinetobacter) are susceptible at ≤2 µg/mL. From this, WITH CAUTION, you can suggest the agent might be used, with appropriate management by infectious diseases specialists.

There is yet another possible way to deal with the problem of the missing breakpoints in the CLSI guideline. EUCAST has an interesting thing called the "PK/PD" breakpoint, which is based on the PK/PD data and is independent of MIC distributions for given species. For example, the meropenem PK/PD breakpoint is ≤2 µg/mL, derived from gram-negative animal infection models and a 1,000-mg dose. Any isolate with an MIC of ≤2 µg/mL could be considered susceptible—which matches the majority of EUCAST meropenem ECVs for organisms for which meropenem is used, like Enterobacteriaceae, Acinetobacter, Pseudomonas, and anaerobes. However, the enterococcal ECV for meropenem is 8 µg/mL, above the PK/PD breakpoint—which makes sense, as meropenem is not thought to be a great drug for enterococci.

How about another example? Let's say your clinical team is dealing with a really resistant Stenotrophomonas maltophilia infection, and they ask about new drugs, ceftolozane-tazobactam and ceftazidime-avibactam. Let's be clear—there's zero clinical data or PK/PD data out there for these bugs. BUT EUCAST PK/PD breakpoints are ≤8 µg/mL and ≤4 µg/mL, respectively. You know that is the same as the clinical breakpoints for other gram-negative bacteria—Enterobacteriaceae and P. aeruginosa. Maybe you test this bug against these agents and find the MICs are 32 and 64 ug/mL, respectively. In this case, you'd say it's probably not a good option for this infection.

I'll wrap up by saying that this stuff gets complicated. Being able to chat it out with a good infectious disease (ID) physician and ID pharmacist is really helpful. I'll also say that you're going to want to disclaim anything you put in the chart, so it's totally clear that this is not "business-as-usual" testing. However, I do feel that providing more information is better than less information, provided you have confidence that the test method you are using is giving accurate resultsâ€¦ more on this next time, when we talk about fosfomycin!

* Note that throughout I refer only to MICs, but you can add "disk diffusion zones" to this as well.

This is the first in a monthly series from Romney Humphries covering specialized concerns in antibiotic susceptibility testing. The above represents the opinions of Dr. Romney Humphries, and is not necessarily representative of ASM. If you have a question or topic you'd like addressed in a future column, leave a comment below!