TMI: Deciding Whether to Include MIC Values in Susceptibility Reports

In the exhilarating early days of the antibiotic era, a doctor treating a patient with penicillin or a sulfonamide antibiotic had little use for susceptibility testing: resistance to these new drugs was rare, and even if a pathogen were resistant, there was no other therapeutic option to turn to. Today, the situation is reversed: over 60 different antibiotics are available in the United States, but with rare exceptions (for example, penicillin for Group A Streptococcus), resistance is so widespread and so variable that the susceptibility of a pathogen to any given drug cannot be assumed. Clinicians therefore rely on the reports provided by the clinical microbiology lab detailing the results of antimicrobial susceptibility testing (AST) in order to decide which antibiotic will be effective for their patient.

MICs and What They Mean

Minimal inhibitory concentration (MIC) testing has been the standard AST method for many decades and remains the accepted reference method for nearly all antimicrobials. In an MIC assay, bacteria in liquid suspension are exposed to an antibiotic at a range of concentrations in a two-fold dilution series (e.g., 1  µg/mL, 0.5 µg/mL, 0.25 µg/mL, 0.125 µg/mL, etc.). The lowest concentration that inhibits visible growth is the MIC.

But what does it mean for a patient if the organism infecting them has an MIC of, say, 2 µg/mL for a given antibiotic? In isolation, nothing. The MIC range at which a given drug is effective for a given bug in vivo depends on a number of different factors. Perhaps the most important of these is the concentration of drug that can be achieved in the human body without excessive toxicity: if a drug has an MIC of 2 µg/mL (i.e. it will only inhibit bacteria at a concentration of 2 µg/mL or higher), but a concentration of 2 µg/mL in the blood is highly toxic to humans, then it will be impossible to treat the bacteria without harming the host. In reality, of course, the distribution of a drug in the human body is far more complex than a single concentration and varies over time and across different tissues; the study of such distributions, known as pharmacokinetics, is one of the key sources of information considered in determining which MICs are likely to be effective for a given drug/bug combination. In addition, studies of clinical outcomes, first in animal models and then in patients, are evaluated to determine how well drugs work in actual practice for bacteria with different MICs.

Once sufficient pharmacokinetic and clinical data have been collected, interpretive criteria ("breakpoints") can be established for a drug. These criteria classify certain MICs for a species or family of bacteria as indicative that they will be susceptible ("S"), intermediate ("I"), or resistant ("R") to the drug in question. (A fourth interpretation, susceptible-dose dependent or SDD, is discussed below.) In the United States, such breakpoints are established by two organizations: the Food and Drug Administration and the Clinical and Laboratory Standards Institute (CLSI). CLSI breakpoints are typically used by clinical microbiology labs. Using our example above, it might be determined that isolates with an MIC of ≤0.25 µg/mL are susceptible to the antibiotic, those with an MIC of 0.5 µg/mL are intermediate, and those with an MIC of ≥1 µg/mL are resistant.

When an MIC Is Too Much Information 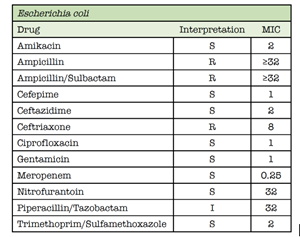 Clearly, reporting MICs alone without the corresponding interpretive criteria is not particularly useful to clinicians, and clinical labs should always list an interpretation for each drug when they report out susceptibilities, as recommended by CLSI. There is less consensus on whether the actual MIC value should also be included in the AST report (Figure 1), and on this matter CLSI is not prescriptive.

It might seem at first that more information would be better—why withhold data that might be useful to clinicians? However, MIC values may generate more confusion than clarification, particularly for physicians who are not specialists in infectious diseases and are not familiar with the relationship between an MIC value and its categorical interpretation (i.e. its classification as S, I or R). Some doctors may assume that the drug with the lowest absolute MIC value is the most effective, and therefore the best option for the patient, but this is not always the case.

Take a look at Figure 1: the drug with the lowest MIC value is meropenem (MIC 0.25 µg/mL), while nitrofurantoin has the highest MIC (32 µg/mL) of the drugs to which the isolate is susceptible. Surely meropenem would be a better drug than nitrofurantoin, right? Not necessarily. If the E. coli in this case was recovered from urine and was causing a bladder infection, then nitrofurantoin might be an excellent option, as it is highly concentrated in the urine, where it reaches levels well above this isolate's MIC. (It does not reach therapeutic levels in the blood or other tissues, however, and should only be tested for isolates recovered from the urinary tract). Nitrofurantoin is also less toxic than many other antibiotics and, unlike meropenem, can be taken orally. Furthermore, meropenem is an unnecessarily broad-spectrum antibiotic for an isolate such as this, which is susceptible to several other agents. There is a risk, then, that a clinician looking for the drug with the "best" MIC value could be swayed toward selecting an antibiotic that is not the best choice for his or her patient.

Putting the MIC to Use

On the other hand, there are situations where knowledge of an MIC can help a knowledgeable clinician optimize care for a patient. Take the case of meropenem, one of the broadest-spectrum antibiotics available. Bacteria in the Enterobacteriaceae family (which includes E. coli and Klebsiella species) are considered by CLSI to be susceptible to meropenem if they have an MIC of ≤1 µg/mL, but "wild-type" E. coli (that is, organisms with no acquired resistance mechanisms) typically have MICs of ≤0.06 µg/mL. A doctor using meropenem to treat a patient who has an infection with an E. coli isolate whose meropenem MIC is 1 µg/mL may find it helpful to know that the isolate is on the high end of the susceptible range and may monitor the patient more closely than usual or consider using an alternative drug if one is available. Because bacteria that are resistant to meropenem are frequently already also resistant to most other classes of antibiotics, however, there often is no alternative drug or alternative drugs, such as colistin, may have problematic side-effect profiles. In these cases, knowing a specific meropenem MIC may be helpful in a different way, as there is some evidence that meropenem "salvage therapy" may be effective for strains at the lower end of the resistant range if it is given at higher than traditional doses or administered continuously to maintain constant blood levels—so knowing whether a resistant isolate has an MIC of 4 mg/mL (the lowest MIC in the resistant category) or 64 mg/mL could be important as well.

The relevance of specific MIC values for therapeutic decisions has been recognized by CLSI through the introduction, in 2014, of the susceptible-dose dependent (SDD) category for cefepime against Enterobacteriaceae. Isolates with an MIC of 4 or 8 mg/mL are now considered to be SDD; that is, susceptible provided that specific doses of cefepime (specified by CLSI for each MIC) are administered. These doses, to quote the CLSI, â€œresult in higher cefepime exposure, either higher doses or more frequent doses or both, up to the approved maximum dosing regimens. Of course, such specificity presumes a high degree of AST accuracy and precision—a higher degree, perhaps, than may be achievable in reality. Here again, then, we encounter a situation where it could be argued that the MIC provides "too much information"—in this case by potentially exaggerating the degree of precision with which optimal dosing can be known.

Ultimately, the decision of whether or not to include MIC values in an AST report is probably best made on the level of the individual laboratory and hospital, taking into account input from the lab, from specialist and non-specialist clinicians, and from representatives from the hospital's antimicrobial stewardship committee. Even if MIC values are not routinely published in the medical record, they can be made available on request or provided selectively to infectious diseases clinicians or to hospital epidemiologists, who may find such data valuable for treatment decisions or for assessing resistance trends. The goal, in the end, should be to provide the information that clinicians need in each case to provide the best care for their patients.

The above represents the opinions of Dr. Thea Brennan-Krohn, and is not necessarily representative of ASM.