Summertime, and the Living Is Easily Filled with Ticks and Mosquitoes

The Brief Case from the July 2017 issue of the Journal of Clinical Microbiology highlights the importance of a full patient history for an accurate diagnosis. This time of year, it's especially important to ask patients how they've recently spent their free time, since many who enjoy the outdoors may be exposed to disease-carrying ticks and mosquitos. 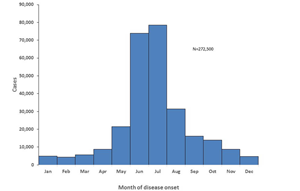 The most commonly reported vector-borne disease in the United States, Lyme disease, is caused by infection with the spirochete Borrelia burgdorferi. The ticks that transmit the bacteria are Ixodes scapularis and I. pacificus, which are parasites of a number of types of wildlife, most notably deer. In 2015, Lyme disease was the sixth most common Nationally Notifiable Disease. Disease reports in the United States are concentrated in the Northeast and Midwest, and case confirmation peaks in the summer months (see graph, right)--just as people are most likely to be in the great outdoors.

Many people are familiar with the bullseye rash that differentiates a new infection, but clinical diagnoses rely heavily on serological testing. Several recent Journal of Clinical Microbiology reports have concentrated on best practices for sample collection, testing, and standardization:

Published in 2016, the fifth edition of Infections of Leisure from ASM Press features a number of leisure activities that are associated with infectious disease risk. The third chapter covers the risks to hikers and campers enjoying a respite from the urban world, with a focus on these arthropod-borne diseases. Enjoy an excerpt of the chapter linked here, and learn about other Infections of Leisure in the book! A complete patient travel and activity history can help in diagnosing more than just Lyme disease. Many outdoor activities in the summer bring people closer to the ticks and mosquitos carrying babesiosis, West Nile disease, and rickettsial infections. While bug bites may be one disease indicator, reaction to the bites can vary between individuals and can even go unnoticed, complicating diagnosis.