When a Little Bit of Blood Won't Do: Detecting Bacteremia

Bloodstream infections are a major cause of morbidity and mortality, and identifying the causative organism(s) is critical. Can the most important step in this process really be as simple as collecting enough volume of blood for culture? Let's discuss some of the evidence, and the role of the clinical microbiology laboratory in this important testing process.

One of the most critical functions of the clinical microbiology laboratory is the detection of the organisms causing bloodstream infections (BSI) by performing blood culture. The last several years have witnessed an explosion of new technologies that impact the time to organism identification once a blood culture is determined to be positive: molecular tests that target panels of common BSI organisms and genetic markers of antimicrobial resistance, MALDI-TOF (Matrix-assisted Laser Desorption/Ionization Time-of-Flight) for detection of protein signatures directly from blood culture bottles without sub-culture, and most recently, an identification and phenotypic resistance assay for select organisms directly from positive culture bottles.

There are many factors prior to the identification phase that have a significant impact on blood culture results. Improper collection techniques and inadequate skin sterilization can contribute to  blood culture contamination, a significant source of added expense that may also present a patient management dilemma (in some patients organisms that are typically considered contaminants may actually cause disease). The timing, frequency, and site selection for blood collection may influence detection of transient bacteremia or help determine whether a venous catheter or device is infected. The selection of bottle types (with variation in the broth, antibiotic inactivating constituents, etc.) has an impact on downstream results. Modern continuous incubation blood culture systems have enhanced both the absolute recovery rate and the time to detection compared to older methodologies. Some have suggested that perhaps the most critical factor in the blood culture process is the volume of blood collected for culture.

Why is the collection volume important? The answer is pretty straightforward: bacteremic patients often have very few organisms per milliliter (mL) of blood; less than 1 colony forming unit (CFU)/mL is common. In fact, as few as 0.1 CFU/mL is relatively common (see Figure 1), and <0.1 CFU/mL would often go undetected, so we don't have much information about how common that level may be. Several lines of evidence indicate how common low-level bacteremia is, one of which can be routinely evaluated in any laboratory utilizing multiple-bottle sets: growth of facultative organisms (which grow well with or without oxygen) in only one bottle of a two- (or more) bottle blood culture set. If 5-10 mL of blood is loaded into each bottle, and only one bottle is positive, then there must have been approximately 0.05 to 0.1 organisms per mL of blood. I recently evaluated this for several organisms at my current institution and found that for common facultative gram-negative BSI organisms (Escherichia coli, Klebsiella, etc.), around half of the isolates grew in only one bottle of an aerobic/anaerobic set (without preference for which bottle). Of 124 culture sets positive for E. coli in one year, 65 grew out of both bottles, 30 out of the anaerobic bottle only, and 29 out of the aerobic bottle only. Directly quantitative evaluations of the levels of bacteria in blood have been carried out in the past using lysis centrifugation and pour-plate methods. Figure 1 is adapted from one such study. 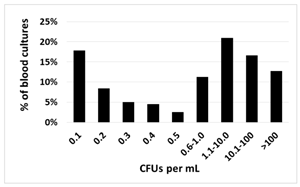 Quantitative range of organism recovery from blood with a lysis centrifugation system and 10 mL of blood. Adapted from Kellogg et. al., JCM 1984.

The columns on the right cover ranges of colony counts, and we can see that the most common number of colonies detected was 1 colony (from 10 mL of blood, so 0.1 CFU/mL). What happens to the left of the data shown in the chart (<0.1 CFU/mL)? While less than 0.1 CFU/mL is outside the limits of what can be consistently detected (from 10 mL of blood), it is firmly in the realm of reality. If bacteremia occurred at a level of 0.02 CFU/mL, for example, we would only detect it sporadically, on average in every 5th bottle (at 10 mL per bottle). In most studies, low-level bacteremia is more common for some Gram-negative organisms. One such organism is Pseudomonas aeruginosa, which in lysis centrifugation studies is typically detected at around 0.1 CFU/mL (a single colony from 10 mL), and detection is doubly disadvantaged in that routine blood culture methods often use half of the total volume collected for anaerobic culture, and many P. aeruginosa isolates grow poorly or not at all in anaerobic blood culture conditions. Common fungal organisms that cause bloodstream infections (fungemia) tend to occur at a higher burden per mL of blood and may even be detected directly from small volumes of blood without culture (for Candida species), but the high prevalence of low burden bacteremia may make such direct approaches impractical for bacteria.

A very small number of bacteria in the bloodstream does not necessarily mean that a person is sick. Bacteria access the bloodstream following a variety of incidents, including skin abrasion or puncture, tooth brushing, and flossing. Some may be concerned that increasing the volume of blood collected will lead to detection of bacteria released into the bloodstream incidentally. There is also concern that the collection of larger volumes of blood will lead to nosocomial anemia, in the context of the many other tests for which hospital patients are getting their blood drawn. I think the old saying "if a job is worth doing, it's worth doing well" applies. First, the job has to be worth doing--blood shouldn't be collected for culture unless there is suspicion of a bloodstream infection. But if there is such clinical suspicion, then do the job well. Doing the job well, according to IDSA and ASM guidelines, means collecting blood for culture 2-4 times per septic episode, and collecting 20-30 mL per draw (for adults, with 10 mL into each of 2-3 bottles, and at least one aerobic and one anaerobic bottle). The College of American Pathologists (CAP) has similar recommendations for blood culture volume, and CAP requires that the "laboratory has a system for monitoring blood cultures for adequate volume and feeding back the results to blood collectors" (CAP document MIC.22640). An intriguing study from a few years ago assessed the added detection rate with each 10 mL of blood collected, while also comparing the effect of acquiring 30 mL at each of two blood collections versus 20 mL at each of three blood collections. There are too many interesting aspects of this study to discuss it in depth here (you can read it here), but one crucial point is the added value of each additional 10 mL of blood that was cultured. A couple of comparison points: 60 mL detected 30.7% more nonconditional pathogens than 20 mL, and 63.9% more than was detected with 10 mL. Keep this in mind and look at the data in Figure 1 again (which used a total of 10 mL), where an additional ~60% of organisms could have been detected at lower concentrations of organisms per mL of blood (if more volume had been evaluated) than what is depicted in the graph. Additionally, switching to a 30-mL-per collection, 2-collection (60 mL total) algorithm reduces the number of collections for patients (and phlebotomists) and may have an added benefit of collecting more volume prior to antimicrobial therapy initiation.

Obviously you can't collect 60 mL of blood from a neonate for blood culture, so how should we approach blood culture in pediatrics? Now that Streptococcus pneumoniae and Haemophilus influenzae bacteremias are less common (due to widespread and successful vaccine use targeting these organisms), the number of organisms per mL in pediatric bacteremia is probably very comparable to what it is in adults. So the volume is still important, and recommendations for volume based on patient weight are available. There was an excellent review published recently on pediatric blood culture with additional recommendations.

I am writing from the lab perspective, but maybe it has dawned on you—the clinical microbiology lab doesn't collect any blood! We need to be patient advocates in this case and monitor the blood volumes that are being submitted from the various patient locations that our particular laboratory serves (some automated incubation systems do this for you; other labs can weigh bottles for an estimate), and we should provide feedback to whomever is directly responsible for blood collection. We need to be actively involved in the creation and maintenance of guideline documents that clearly indicate how much blood should be collected for blood culture at our institutions and provide additional education in this area as needed. While exciting new technologies can enhance the diagnostic process downstream of a positive blood culture, health care professionals need to be sure we are doing our part in what has long been considered the most critical step in the blood culture process—collecting enough blood.

The above represents the opinions of Dr. Matthew Pettengill, and is not necessarily representative of ASM.