Is Calcium the Key to Controlling Clostridium difficile infection? 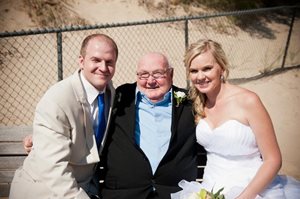 Travis, his wife Melissa, and his grandfather.

I first encountered Clostridium difficile (C. diff ) in 2012. My grandfather was admitted to the University of Michigan hospital suffering from severe gastroenteritis and a blazing hot fever. The doctors quickly diagnosed him with a very serious C. diff infection that would require the removal of his colon to prevent further damage. Unfortunately, the loss of his colon caused malabsorption syndrome and he lost nearly 100 pounds before passing on December 4th, 2013.

Clostridium difficile is an intestinal pathogen that infects hundreds of thousands and kills ~30,000 Americans per year. It causes symptoms ranging from mild diarrhea to dangerous levels of intestinal inflammation, which can result in colon removal or even death. Most patients acquire C. diff infections after receiving broad-spectrum antibiotics, which disrupt the intestinal microbiome that usually protects them from harmful bacteria like C. diff. While antibiotics are the major risk factor, there are others such as advanced age, proton pump inhibitor use, vitamin D deficiency, Crohn’s disease, and ulcerative colitis.

C. diff spreads by forming spores, which are a structure formed by some bacteria that  protects the protein and DNA inside from harsh environmental conditions like antibiotics, disinfectants, low pH, oxygen, extreme temperature, and desiccation. After spores are ingested by susceptible patients, the spores survive the acidic stomach and proceed to the small intestine. There, the spores encounter small molecules known as germinants that activate germination, converting them from a metabolically dormant state to growing bacteria. Germination is required for the bacterium to return to its vegetatively growing state, during which it can produce the toxins that cause disease. Because it is critical for C. diff virulence and transmission, the process of germination is a drug development target to either prevent Clostridium difficile infections or increase antibiotic efficiency. 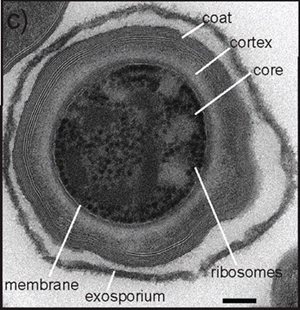 Figure 1. The anatomy of a C. diff spore. Source

When I started graduate school at the University of Michigan, I knew I wanted to study C. diff and was immediately drawn to the laboratory of Dr. Philip Hanna. His primary focus had been on another spore-forming bacterium—Bacillus anthracis, the causative agent of anthrax—but he had recently begun exploring C. diff germination.

While a number of spore-formers germinate in response to the presence of amino acids, C. diff is the only species known to germinate in response to bile salts. These are produced in the liver and secreted into the small intestine to aid in lipid digestion. Evolutionarily this makes sense because this organism resides within the gastrointestinal tracts of mammals. Bile salts induce spore germination through a known receptor in combination with amino acids such as glycine. However, C. diff spores lack the trademark family of amino acid germinant receptors found in nearly all other spore-forming species. So, how do C. diff spores signal germination?

Before we can study C. diff germination, we must understand the spore and the signals involved in germination. Bacterial spores have unique structures that provide resistance to many environmental stresses. Spores consist of several layers: an outermost layer of proteins, lipids, and carbohydrates; a proteinaceous spore coat; an outer membrane; a thick cortex of modified peptidoglycan; an inner membrane; and a spore core. The spore core is dehydrated and contains the proteins, DNA, and ribosomes that the spore will need upon germination plus 0.8–1M calcium-dipicolinic acid (Ca-DPA). Ca-DPA provides the spore resistance to extreme temperatures and is only found within the core of bacterial spores (not in the environment) because it is biosynthesized by the cell during spore formation (sporulation). During germination, germinants initiate the irreversible degradation of the cortex and rehydration of the spore core. Rehydrating the spore core allows for transcription and eventual outgrowth into a replicating cell.

Adding Ca-DPA to Bacillus spores can also induce their germination. And since C. diff also has Ca-DPA in its core, testing whether C. diff spores could respond to Ca-DPA was one of my first experiments. In previous studies, adding Ca-DPA to spores did not induce germination in C. diff, but we discovered that combining Ca-DPA and the bile salt taurocholate together can induce germination—very well, in fact.  When we separated the Ca-DPA into individual components (calcium and DPA), we were shocked to see that spores germinated exceptionally well with taurocholate and calcium. These data suggested that calcium released from inside the spores is a “signal” to activate cortex hydrolysis. While searching to identify this “signal, we made a major discovery: exogenous calcium without DPA (but together with bile salts) can replace glycine as a germinant.

We were able to study this phenomenon in the context of a mouse model of C. diff infection. Our study also identified a gene that is important to the glycine-induced germination response. Without the gene (but still in the presence of taurocholate!), spores couldn’t germinate in response to glycine but could in response to calcium. This mutant gave us a unique opportunity to determine whether calcium played a role in C. diff colonization and infection. This mutant was able to colonize to levels identical to those of wild-type spores, suggesting that there is enough intestinal calcium in the mouse gut to induce germination of C. diff spores in combination with taurocholate. To directly test whether intestinal calcium is responsible for germination in the mouse intestine, we harvested ileal contents from antibiotic-treated mice, depleted the calcium, and measured germination. Not only does intestinal calcium induce germination of C. diff spores, but its depletion results in a 90% decrease of spore germination in mouse ileal contents, and returning calcium, restores germination. 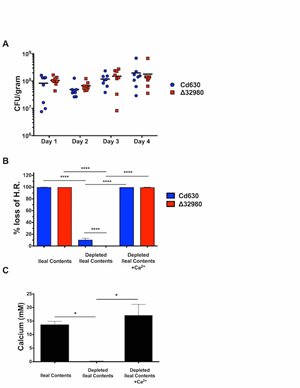 This was an exciting discovery because it helps describe previously unknown details about the mechanism of C. diff germination, but I then realized the potential clinical implications. There are numerous ailments and treatments that affect calcium absorption in the small intestine. Poor intestinal calcium absorption would leave higher concentrations available to induce C. diff spore germination. For example, vitamin D facilitates intestinal calcium absorption, and patients with a vitamin D deficiency have increased free intestinal calcium. These patients are 5 times more likely to get a C. diff infection. This correlation has been known for several years, but the reason behind it was unclear. Until now, researchers hypothesized that it was because vitamin D is important for a strong immune response. But our results provide a mechanism and shed new light on why these patients are at greater risk for contracting a C. diff infection. What if supplementing vitamin D to these patients could decrease the risk of infection?

While decreasing calcium in the gut might help prevent an initial C. diff infection, increasing calcium could help solve a major problem with C. diff infections. Once a patient gets infected with C.diff, there is a 20-30% chance that they will become infected at least once more. The treatment for C. diff is antibiotics that kill the toxin-producing cells, but these don’t affect dormant spores. So after antibiotic treatment stops, any spores that are already in their intestines can germinate and cause a second pathology. For these patients, calcium supplementation might induce germination of the dormant spores to make them susceptible to the initial antibiotic treatment and thus prevent recurrent C. diff infections.

Before we can draw firm conclusions, we need future studies to investigate how both scenarios impact C. diff infections in mice before applying them to humans. We hope that these discoveries and descriptions of the role of calcium in activating germination of C. diff spores will lead to the development of therapeutics or new treatment regimens—ones that were not available to my grandfather, but that could prevent future infections and improve the quality of life for elderly patients. I’ve seen the result of these dangerous infections firsthand; they are not only devastating for the patient but also horrific to their families, who watch their loved ones suffer from a potentially preventable infectious disease.

Travis Kochan is a graduate student in the Department of Microbiology and Immunology at the University of Michigan.