Do “microbial landscapes” really exist? Or is that phrase simply a poetic way to write about microbial ecology?

Look for a moment at the first image in this article. What do you think this image is? Is this data sent back from rovers on Mars, a simulation of the Martian terrain?  Is it a laser scan collected from a submersible sent to the deepest trenches of the ocean? Or how about the second image — it looks like a mountain. Which mountain range do you think it is? Of course it is difficult to guess what these simulated landscapes are without some scale. So here are some clues: the red canyon in the first image is a staggering 550 μm deep. The cliff in the back left-hand corner towers 875 μm high. The mountain in the second image is even larger — over 3 mm from the valley at the base, all the way to the summit.

These landscapes are measured in micrometers rather than kilometers because they existed on once living bacterial colonies, each one about the size of a dime in diameter. I collected the images from within 3D reconstructions of colonies formed by two different bacterial species. I zoomed as far into the model as I could to find a perspective as if we could shrink down and stand upon the colony at the ground level. The red canyon-like image is a scene on a Bacillus licheniformis colony. The “mountain” is part of a colony formed by a different Bacillus species isolated from stingless bees. Only when we zoom out from the original vantage point and look from above can we recognize the structures as the multicellular folds and ridges of a microbial colony. What seemed at first like geology, turns out to be colony morphology.

I use a photographic method to create these high-resolution 3D models of colony biofilms as a way to capture all of the available morphological data in a colony. Just as there is geology locked away within mountains, there is biology hidden across the topography of colonies. Every ridge is made of hundreds of thousands of cells embedded in an extracellular matrix. Ridges develop through patterns of localized cell death and maximize growth of the cells in the community via increased surface area and access to oxygen. The entire landscape arose through a developmental process that began with a few cells inoculated back somewhere on the flat agar surface. 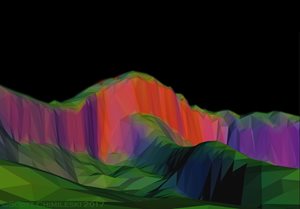 Beyond the applications in the lab, 3D models of bacterial colonies are also an intriguing medium for communicating microbial science to the public. Despite the fact that biofilms and other social aspects of microbes have become a mainstream segment of microbial science, many if not most among the general public think (based on surveys I have conducted) that microbes are asocial, simple organisms. (After all, most microbiologists thought this not too long ago too!) But in my experience, when someone views a timelapse movie of an intricate bacterial colony developing over several days, or a 3D model of a colony with its complex architecture, the first thought is, “Wow, I didn’t know bacteria can do that!” When bacteria act as collectives they are more relatable to organisms that we are intuitively familiar with, like animals. The experience shocks many into realizing that bacteria are anything but boring and simple. 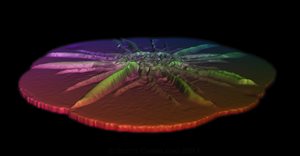 (click to enlarge) 3D reconstruction of a Bacillus licheniformis colony

That’s why I am currently 3D printing a stainless steel rendition of the B. licheniformis colony model seen here for display in an exhibition opening at the Harvard Museum of Natural History on August 26, 2017, World in a Drop: Photographic Explorations of Microbial Life. The colony will be printed many times its actual size, to the point that overhead lighting will cast a shadow off the ridges and other 3D features. These are beautiful and remarkable macroscopic forms of microbial life that many people have never encountered.

When those of us with a passion for microbial ecology write about unseen “microbial forests,” “microbial jungles” or a “microbial Serengeti,” these phrases are not simply poetic. There truly are microbial features that are comparatively just as colossal as canyons and mountains. Microbial panoramas exist not only within colony biofilms in the lab, but also in many other places in nature, from lichen colonies, to biological soil crusts, and the biofilms on so many surfaces, including your own teeth. Next time you are looking through the microscope at a microbial community, imagine how much biology you could directly observe, if you could only enter and experience the mysterious landscapes of the microbial world.