Accurate diagnosis of Clostridium difficile infection (CDI) is challenging for all involved--clinicians, laboratorians, and patients--leaving everyone frustrated.  Current approaches to diagnosis of CDI prioritize either detection of the organism itself, or detection of toxins produced by the organism.  In this blog post, Nira Pollock explores how these diagnostic strategies differ in approach and perspective regarding the guilt of the suspect--should C. difficile be considered "innocent until proven guilty," or "guilty until proven innocent?"

It's a classic conundrum in a criminal investigation:  if someone is present at the scene of the crime it doesn't mean that they committed the crime, but it's awfully suspicious--particularly if they have committed similar crimes in the past.  When toxigenic C. difficile bacteria are found at the scene of the crime--specifically, detected in the stool of a patient with diarrhea--the clinical microbiology and infectious diseases communities still haven't decided whether to give this suspect the benefit of the doubt.  Should toxigenic C. difficile be considered innocent until proven guilty, or guilty until proven innocent? 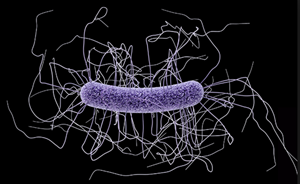 C. difficile is an anaerobic, gram-positive bacterium that can either a) mind its own business as a normal resident of the bacterial community in stool or b) cause disease (under appropriate conditions) with a wide range of clinical severity, ranging from minor diarrhea to fulminant colitis and even death.  Antibiotic treatment disrupts the normally harmonious stool microbial community and thus contributes to overgrowth of the relatively antibiotic-resistant C. difficile organisms, precipitating disease in susceptible individuals.  Importantly, only "toxigenic" strains of C. difficile, i.e., strains that produce virulence factors known as toxins A and B, are capable of causing disease; nontoxigenic strains are considered non-pathogenic.  Both toxigenic and nontoxigenic C. difficile strains can be present in the colon of healthy individuals, a scenario known as "colonization." In toxigenic strains, the genes coding for toxins A (tcdA) and B (tcdB) are co-located in a region of the C. difficile chromosome called the pathogenicity locus. Expression of these genes is regulated by numerous interesting variables, including temperature, availability of carbon sources and amino acids, antibiotic concentration, and even quorum sensing (and thus, the presence of the toxin genes doesn't guarantee the production of toxin proteins in vivo).  Once produced, these toxins can do various types of damage--each has been described in different experimental systems as being capable of proinflammatory, cytotoxic, and/or enterotoxic effects. While toxin A and toxin B have each been shown to be independently capable of causing disease, their relative contributions to human C. difficile infection (CDI) have not been completely elucidated (see also here).  Strains that produce toxin B but not toxin A exist and cause disease; in contrast, strains that produce toxin A but not toxin B have not yet been described.

Current approaches to diagnosis of CDI involve two different general strategies.  The first strategy prioritizes detection of the organism itself--either via molecular amplification of tcdA or tcdB, or via immunodetection of glutamate dehydrogenase (GDH), a molecule that is present in all C. difficile strains. The second strategy prioritizes detection of the toxins themselvesâ€”either via enzyme immunoassays (EIAs) that directly detect the toxin molecules, or via cell culture cytotoxicity assays that detect in vitro toxin activity.  Each of these approaches has its pros and cons in terms of overall cost, workflow, and speed, but let's focus here on the intrigue:  these strategies also differ significantly in terms of their pre-test perception of the guilt of the suspect.

The "Guilty until Proven Innocent" Perspective

Clinicians and laboratorians who lean towards this perspective are focused on detection of toxigenic C. difficile itself--based not on its actual production of toxin within the human host, but rather on its potential to produce toxin.  Such a perspective ends up prioritizing the diagnostics that are most sensitive [in first place, nucleic acid amplification tests (NAATs), and in a close second, GDH detection] and that have the highest negative predictive value, screening out patients who do not have toxigenic organism in their stool and thus cannot have CDI.  Those favoring this perspective point out that current toxin detection assays are either too insensitive (EIA) or too slow (cytotoxicity assay) to use as the primary means of CDI diagnosis.  Proponents of this perspective further point out that even colonized patients (those with C. difficile present in stool but without symptoms of CDI, by definition) have the potential to transmit C. difficile to other patients, and that sensitive detection of toxigenic organism can/should be used for both CDI diagnosis and institution of contact precautions to prevent transmission.   In short, if the patient has diarrhea consistent with CDI, toxigenic C. difficile is present at the crime scene, and there aren't any alternative suspects to explain the diarrhea (such as laxative use, see below), then it's time to sentence that C. difficile to treatment.  This perspective is reflected in current United States-based guidelines, which lean towards diagnostic approaches that focus on detection of toxigenic organism (NAAT or GDH/toxin combo EIAs).  For GDH+/toxin- EIA results, which could reflect either the presence of toxigenic (but with minimal or no production of toxin) or nontoxigenic C. difficile, NAAT has been recommended as a follow-up test to detect any toxigenic C. difficile that might be present.  In these approaches, NAAT-positive results in symptomatic patients are to be considered diagnostic of CDI, regardless of toxin results--because if present, that C. difficile is presumed to be guilty as charged.

This perspective is challenged by others who feel that an approach prioritizing sensitive detection of toxigenic organisms overdiagnoses CDI, leading to potentially unnecessary treatment of patients who may have minimal or no toxin in their stools (and thus likely have other explanations for their symptoms).  To this point, multiple studies have reported NAAT-positive stools in adult and pediatric individuals who clinically did not have CDI.  [Rates of colonization in the youngest pediatric patients are particularly high (14-37% in children < 1 year old!), making pediatric CDI diagnosis particularly challenging; colonization rates fall to equal adult rates by age 3.]  Additionally, as mentioned above, the presence of a toxigenic organism doesn't guarantee the presence of toxin, due to the complex regulation of toxin A and B expression.  Others point out that there is rampant overuse of the diagnostics themselves, with many clinicians ordering testing for C. difficile in patients who have recently received a laxative or who do not truly have objective diarrhea consistent with CDI.  While the confusion around appropriate test ordering certainly isn't unique to use of NAATs for diagnosis, the combination of sensitive detection of C. difficile and insufficiently targeted testing arguably frequently convicts an innocent bystander.

The "Innocent until Proven Guilty" Perspective

Those who favor this perspective focus on the fact that the presence of toxin is necessary for disease.  If toxin isn't present in stool, then even though that toxigenic C. difficile bacterium was capable of causing CDI, it actually didn't.  Multiple studies have demonstrated that NAAT-positive/toxin-negative patients have milder symptoms than NAAT-positive/toxin-positive patients, and other studies have demonstrated that toxin-positive patients have higher mortality than toxin-negative patients.  Finally, preliminary studies have correlated toxin quantity in stool with disease severity.  This toxin-focused perspective is reflected in the European guidelines for diagnosis of CDI, which recommend starting with a sensitive test for the organism (NAAT or GDH EIA) but then reflexively testing positive samples with a toxin detection test, and only considering patients with a positive toxin result as likely to have CDI.  In this algorithm, patients who have toxigenic organism but not detectable toxin in their stool may well be "carriers" (colonized) rather than having CDI, and further clinical evaluation is required.

This perspective also has its challengers.  An easy argument against any toxin-focused perspective is that existing rapid toxin EIAs are analytically insensitive and will miss patients who do have low levels of toxin present in stool and may have CDI; studies are now underway to validate ultrasensitive toxin immunoassays that will circumvent the limitations of both insensitive conventional immunoassays and slow cytotoxicity assays.   Particularly crotchety challengers might argue that even the presence of toxin does not always indicate CDI; toxin has been detected in the stool of asymptomatic individuals in some studies, and has even been detected in the stool of some patients after clinically effective therapy.  This challenge demonstrates the vexing reality that toxin is necessary, but not sufficient, for disease. And finally, to make it all even more confusing, interactions between host immunity and toxin levels in stool (and the impact of host immunity on toxin function, if toxin is present) are still not understood.  A full understanding of the utility of toxin detection for disease diagnosis will depend on elucidation of all of these interactions.

Before we feel too sorry for misunderstood C. difficile, we should remember that there are other pathogens that never get the benefit of the doubt when they are detected in a human being, and for good reason:  they are always guilty.  If M. tuberculosis is detected by culture in any sample type, that patient will be assumed to have active tuberculosis, and treated accordingly.  Similarly, influenza virus is never blown off as a "colonizer," though it can certainly hang around well after the initial infection (particularly in children and immunocompromised patients).  For bugs that can claim to be members of the normal human oral, skin, or colonic flora, like C. difficile, it can be much harder to define their role in infection, and infectious diseases clinicians spend a lot of time trying to decide which bugs found within specimens of various types are a cause of an infection or just an innocent bystander along for the ride.  Certainly toxigenic C. difficile deserves its reputation as a bug that can cause serious trouble; however, it isn't always guilty.  It may be that in the future, neither the "detect toxin!" nor the "detect toxigenic organism!" camps will prevail, and optimal diagnosis and prevention of CDI will ultimately require that we know everything at once--whether a toxigenic organism is present, whether toxin is present, and whether protective antibody is present. Truth may, in fact, lead to justice.

The above represents the opinions of Dr. Nira Pollock, and is not necessarily representative of ASM.