Testing Staphylococci for Oxacillin Resistance—Why Is It So Complicated?

Be honest: do the cases in the lefthand table make you break into hives? It's not an uncommon response! S. aureus is a sneaky bacterium, throwing susceptibility curve-balls like those to the left on a regular basis. Not to mention the non-aureus staphylococci, which we are now routinely identifying by the power of our MALDI-TOFs—Staphylococcus pseudintermedius, anyone? Despite the fact that the primary mechanism for oxacillin resistance (the mecA gene, which encodes PBP2a) is the same across all staphylococci, it manifests as slightly different phenotypes in different species. As a result, the Staphylococcus table in the Clinical and Laboratory Standards Institute (CLSI) M100S document has been a continual construction zone over the past decade, as we try to keep up with new species, new resistance mechanisms and new testing challenges. However, there is no arguing that accurate oxacillin susceptibility testing of the staphylococci is one of the most clinically meaningful tests performed by the laboratory. Study after study has demonstrated that infections caused by oxacillin-susceptible isolates are best treated with a beta-lactam, and vancomycin is a suboptimal choice for those infections. So, while it may not be not the sexiest topic to launch the Bugs and Drugs Blog, I thought it would be a topic to which we can all relate.

Let's start with the basics: Staphylococcus aureus. CLSI recommends testing cefoxitin (by disk or MIC method) to detect mecA-mediated resistance (and, incidentally, mecC-mediated resistance). This is because cefoxitin is a much better inducer of mecA than is oxacillin. As it turns out, this is also the case for Staphylococcus lugdunensis, which is why we test both these staphylococci in the same way, and interpret results by the same breakpoints. In contrast, cefoxitin MIC does not reliably detect mecA-mediated resistance among the coagulase-negative staphylococci (CoNS). As a result, commercial, automated susceptibility test (AST) systems include both oxacillin and cefoxitin MIC tests. Invariably, when testing both these agents, you'll encounter an oxacillin-resistant, cefoxitin-susceptible isolate of S. aureus (Case 1). These isolates have a mechanism of oxacillin resistance other than mecA, such as hyperexpression of blaZ (a penicillinase) or other alternative PBPs. Such isolates are pretty rare (my laboratory encounters one every 6 months or so), but per CLSI, they should be reported as MRSA. These isolates test negative for PBP2a, an expected result. 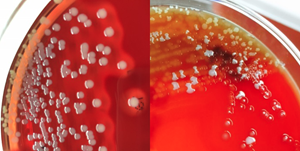 What about those atypical, poorly growing isolates of S. aureus? You know, the ones you see in cystic fibrosis respiratory cultures or from prosthetic joint infections. These isolates fail to grow in your AST system (Case 2) and won't grow on Mueller Hinton agar (MHA). Many of us, after pleas from our physicians for susceptibility data (any data!) for such isolates, have attempted to find a media that supports growth of these atypical isolates and test cefoxitin. The CLSI just finished up a study to investigate this approach, and  unfortunately found that such approaches result in false-negative results for oxacillin resistance. In our evaluations, we found that cefoxitin disk performed on sheep blood MHA (BMHA, chosen because it supported growth of most of these isolates) did not detect mecA in 19.5% of isolates. On the other hand, commercial PBP2a tests worked just fine, especially if growth from around a cefoxitin disk (on BAP or BMHA) was used for testing. As such, we added a comment to Table 2c in M100S 27th Edition, to indicate that testing cefoxitin on media other than cation-adjusted Mueller Hinton broth or MHA does not reliably detect mecA-mediated resistance, and that PBP2a or mecA tests should be done for such isolates. This isn't much help to our physicians, who would like more data than MRSA vs. MSSA, but in my opinion this study really highlighted the challenges associated with testing outside the CLSI guidelines. Perhaps, with technologies like whole-genome sequencing, we might be able to predict susceptibility for other drugs for these atypical S. aureus isolates in the future.

That brings us to case 3, where your rapid diagnostic test gives you a mecA-positive result, but the darn bug is susceptible to both oxacillin and cefoxitin on subculture. CLSI has some advice on how to approach this as well, in a set of tables developed to troubleshoot isolates where molecular and phenotypic tests disagree. You can find those here. In essence, CLSI advises the conservative approach â—i.e., report as MRSA if EITHER the phenotype or the genotype is indicative of MRSA. Incidentally, Fred Tenover had a great article on this scenario in Clinical Microbiology Newsletter. 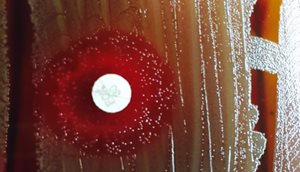 Cefoxitin disk diffusion of a small colony variant of S. aureus on a BMHA. Photo courtesy of R. Humphries.

On to CoNS. Or, maybe we should call them the non-S. aureus staphylococci, since some of these (S. pseudintermedius, S. schleiferi) are coagulase positive. These...are complicated, and likely to become increasingly so. Until recently, everything that wasn't S. aureus or S. lugdunensis was lumped together and treated like S. epidermidis, the most commonly isolated species. For S. epidermidis, cefoxitin disk is a better predictor of mecA than oxacillin MIC, but paradoxically the cefoxitin MIC doesn't work—which is a bit nuts, if you think about it, but is true nonetheless. Anyway, because few of us test by disk alone, but rather use commercial MIC-based ASTs, we test oxacillin. This becomes a challenge for non-S. epidermidis CoNS as isolates with oxacillin MICs of 0.5-2.0 μg/mL (resistant by the CoNS breakpoint) may not have mecA. CLSI instructs laboratories to do a cefoxitin disk test to confirm susceptibility of these isolates. If susceptible by cefoxitin disk, we report oxacillin susceptible; if cefoxitin disk resistant, report as oxacillin resistant. This is something I am sure that few of us actually do, because we almost never identify CoNS to the species level. Or, at least we didn't until we got a MALDI-TOF. Today, my lab (and many others) routinely identify CoNS by the MALDI-TOF, and are seeing unusual isolates, like S. pseudintermedius, with some frequency. One of our UCLA postdocs, Dr. Max Wu, decided to evaluate these for mecA and by cefoxitin and oxacillin tests, since they were sometimes misidentified as S. aureus due to positive coagulase reaction. What he found surprised us: oxacillin disk and MIC were the best predictors of mecA, whereas neither cefoxitin disk nor MIC could identify isolates with mecA! CLSI got rid of the oxacillin disk altogether for the staphylococci about 15 years ago, due to false-susceptible results for other species. However, following Max's studies, we reinstated the oxacillin disk to M100S for S. pseudintermedius. It should be noted that the veterinary labs already had this figured out, and have published oxacillin disk and MIC breakpoints in their CLSI VET documents for several years.

This finding made us question what the best method was to test species of Staphylococcus other than the species thoroughly evaluated to date (S. aureus, S. lugdunensis, S. epidermidis and [now] S. pseudintermedius). CLSI will be systematically evaluating this in coming years. We've started with S. schleiferi, and preliminary data have shown us that S. schleiferi subsp schleiferi and S. schleiferi subsp. coagulans are best tested by oxacillin, as cefoxitin is not a good predictor of the presence of mecA. If you're interested, the team has a poster on this at the 2017 ASM Microbe meeting .

I have been continually amazed by the fact that  different species of staphylococci harbor the exact same mecA gene, in the exact same chromosomal cassettes, but behave so differently! I haven't found a great answer as to why this might be, but would love to hear if you know! And if you're still totally stumped (I'll admit it—I often am), see below for my Staphylococcus oxacillin resistance testing guide.

The above post reflects the thoughts of its author, Dr. Romney Humphries, and not the American Society for Microbiology. Dr. Humphries reminds readers that the post is for informational purposes only and encourages clinical microbiologists to follow the SOPs and CLSI guidance used in their own labs.