How Stitching Two Viruses Together May Combat One

The stumped, stooped-over posture. The slow, shuffling gait. The mind-numbing ache of joints, day in and day out. This isn’t Mary Shelley’s stitched-together monster, or the body of an elderly person grown weary with age. It’s that of a 30-year-old person, left with the arthritis-like calling card of the chikungunya virus (CHIKV)—the virus named using a term of the southeast African Makonde people for the arthritic condition developed following infection.

Known as arthralgia in the medical community, noninflammatory joint pain is a common hallmark of CHIKV infection and can last from weeks to almost a decade. While to some it may seem a mere nuisance, CHIKV-induced arthralgia is a major concern in developing countries, causing as many as 75% of those affected to take time off work. In 2017 so far, there have been more than 600 confirmed cases of CHIKV in the Americas with almost 4,000 suspected cases. One study estimates that upwards of 85% of those infected will develop arthralgia. Recent advances in vaccine development may help in preventing CHIKV infection and its crippling sequelae.

Along with Mayaro and Venezuelan equine encephalitis, CHIKV belongs to the alphavirus family. Alphaviruses pack lightly; their genome is a single, 11.5-kb strand of positive-sense RNA that can be read by ribosomes immediately after infection of a host cell. The CHIKV genome only codes for 7 proteins: 4 for replicating the genome and 3 for building the virus itself. 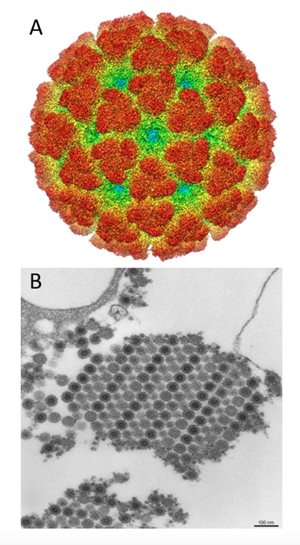 Figure 1. A) Cryoelectron microscopy reconstruction of CHIKV. The capsid (blue/green) forms the scaffold of the virus and anchors the E1/E2 proteins (red) which protrude from the surface to bind host cells (source). B) A cluster of CHIKV particles form a honeycomb pattern (source).

The virus is breathtakingly geometric. The capsid protein (blue/green in figure one) acts like a scaffold, sheltering the genome and anchoring the remaining structural proteins (red) E1 and E2. E1 and E2 stick out from the surface and recognize receptors on the surface of the host cell to which they bind, initiating invasion into the cell and subsequent viral replication.

Many alphaviruses replicate in both vertebrates (e.g., humans, rodents, and nonhuman primates) and arthropods (like mosquitoes). In rural settings, these viruses frequently cycle between dormancy and low-level endemic infections, occasionally making their way into densely populated areas and flaring into transient epidemics.

In the case of CHIKV, 2 different species of Aedes mosquito—A. albopictus and A. aegypti—can become infected and spread the virus. Effective treatments for human CHIKV infections are few and far between making them especially difficult to access in the rural communities most often affected. Thus, the most effective way to control the disease means controlling the spread of the virus. Some options for this include reducing mosquitoes (an admirable, but historically difficult prospect), reducing contact between mosquitoes and humans, or developing a safe and effective vaccine.

“Weaving” Two Viruses into One

According to Scott Weaver, Ph.D. there are a lot of good things going for CHIKV vaccine development. Dr. Weaver is the Scientific Director of the Galveston National Laboratory at the University of Texas Medical Branch in Galveston, Texas, and recently gave a talk at the University of Michigan highlighting his work developing CHIKV vaccines. A key advantage for scientists developing CHIKV vaccines is that there is only 1 viral serotype; a CHIKV vaccine will protect against nearly all circulating CHIKV virus. Furthermore, the immune response can generate antibodies capable of preventing the virus from infecting host cells; the virus is easy to manipulate for generating attenuated vaccine strains; and there are good animal models in which to test vaccine efficacy. What this boils down to is—scientists can more easily create and test an effective vaccine.

In a December 2016 article published by Nature Medicine, Weaver’s group described a new advancement in CHIKV vaccine development. While most alphaviruses can infect both human and insect cells, a 2012 study identified the Eliat virus, an alphavirus that is completely restricted to insects—both because it can’t enter other cell types and because it fails to replicate its genome even if placed inside a noninsect cell.

Upon identifying Eliat, Weaver’s group asked, “what if we can use this virus that does not replicate in humans to create a CHIKV vaccine that will protect humans?”

Some of the most effective vaccines are attenuated, using weak but live virus or bacteria. The vaccine strains can replicate (though not well) and stimulate a more realistic immune response to a greater variety of microbial antigens. However, attenuated pathogens have the potential, though extremely rare, to regain full replicative strength and cause disease instead of preventing it (which is why they aren’t used very often).

The Weaver group combined the insect-only replication machinery of Eliat with the antibody-inducing structural proteins of CHIKV. This chimeric Eliat/CHIK virus could enter mouse cells and stimulate an immune response, but not create more viruses. This property means that it wouldn’t be able to make humans sick or get transmitted back into mosquitos.

But Does it Work as a Vaccine?

Yes—so far. A single dose of the live virus vaccine was enough to protect cynomolgus macaques (whose CHIKV infections resemble that of humans) from CHIKV infections for almost 10 months (the duration of their study). This is great news, since the holy grail of vaccine development is a vaccine that requires only a single dose to provide long-term protection. According to Dr. Weaver, their study suggests that the chimeric vaccine is capable of creating long-lasting protection.

Applying the use of this vaccine in CHIKV-endemic areas is still a long way off, as the vaccine needs to be evaluated for safety and efficacy in humans. In principle, the Eliat virus could be repurposed to create attenuated virus vaccines against other, similarly structured viruses. Perhaps researchers could even create a single vaccine with a number of Eliat/alphavirus chimeras to simultaneously induce protection against a range of viruses.