Colistin Testing--Are We Whacked Out?

Colistin (polymyxin E) testing is the whack-a-mole of my lab. Every time we come up with a colistin-testing solution that makes me comfortable, makes the clinicians happy, and doesn't drive the staff bonkers, some new issue pops up and unravels all our plans. Here's an abbreviated history of colistin testing in my lab--it might seem familiar to some of you! 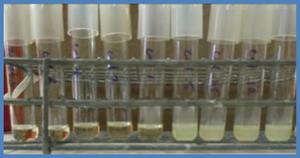 First came a wave of requests for colistin MICs from our ID physicians, on the heels of the arrival of CRE in Los Angeles (2009). Then, as now, there were no FDA-cleared tests for colistin susceptibility (don't worry--I'll come back to this below). We opted to test the drug by broth microdilution (BMD), a method we routinely perform for clinical testing. We ordered the powder and added it to our panels, as we do. However, we could not get the dratted E. coli ATCC 25922 into control--it was persistently low. ("I've never had a QC issue like this in all the years I've done BMD," said Janet Hindler at the time.) We inquired with our colleagues at CDC, but they were struggling with colistin problems of their own--skipped wells. After conferring on methods and consulting the literature, we realized two facts about colistin that were at the root of both problems. First, colistin is really, really sticky. So sticky that in a 0.5-µg/mL well of colistin, 96.5% of the colistin is stuck to the plastic, and only 3.5% is in solution. The sticking is saturable, meaning the effect is most apparent at low concentrations. Nonetheless, it makes it hard to get an accurate amount of colistin into a series of dilutions, which can cause the skipping phenomenon CDC experienced. Second, polysorbate 80 (P-80) prevents this sticking, resulting in a big impact on colistin MICs at the low end of the concentration range (<1 µg/mL). We, like others, routinely use waster with 0.002% P-80 for our BMD inoculum, to help the bacteria distribute evenly into each of the 96 wells of the BMD panel. E. coli 25922, which has a colistin MIC <1 ug/mL, is especially impacted by the P-80 effect, the reason we couldn't get it into control. Armed with these data, we worked with CLSI to establish new QC ranges for colistin, with and without P-80. Hallelujah! Problem solved, let's move on! 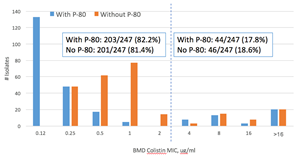 But ... not so fast. The next year, Dr. John Turnidge presented data at the CLSI Antimicrobial Susceptibility Testing (AST) Subcommittee meeting that suggested the reason that P-80 reduced colistin MICs had nothing to do with colistin sticking, but rather that P-80 and colistin worked synergistically on the gram-negative cell wall! And use of P-80 might erroneously under-call colistin MICs! Gah! His evidence? A series of BMD experiments performed in Teflon-coated mini-muffin tins (yes, you read that correctly. Guaranteed no-stick, dual action for both your banana-nut-breakfast-treat-baking and colistin needs). John demonstrated that, aside from the whole sticking issue, P-80 still lowered colistin MICs. From a mechanistic perspective, it's a concept that makes sense: colistin works on the outer surface of gram-negative bacteria by binding LPS. P-80 acts on the inner membrane of GNRs. Usually, P-80 can't cross the outer membrane, but it can lyse spheroplasts (cells without an outer membrane). One can imagine a scenario wherein colistin destabilizes the outer membrane, allowing P-80 access to the inner membrane. As a result of "mini-muffin tin-gate," CLSI and EUCAST eliminated the option of testing colistin with P-80 and deleted the P-80 QC ranges, sending us back to the drawing board. (As an aside, I will say that I am not totally convinced P-80 makes a difference for clinical testing. P-80/colistin synergy is only seen at MICs below the clinical breakpoint for Pseudomonas aeruginosa and Acinetobacter baumannii, and below the Enterobacteriaceae epidemiological cut-off. Additionally, colistin resistance is due to poor binding of colistin to the cell wall; hence, the outer membrane of resistant bacteria isn't destabilized by colistin and P-80 can't reach the inner membrane. So, resistant isolates will test resistant, regardless of the presence of P-80. But I digress.) 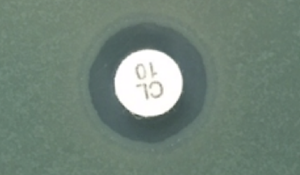 We were in a new colistin testing bind--so, how about Etest? It's what we all turn to for a no-fuss MIC method, right? Sadly (summarizing a lot of work in three words), it doesn't work. Why? To be honest, I'm not sure--one might think it's because colistin, being a big molecule, can't diffuse sufficiently into the agar--this is why disk diffusion doesn't work. However, one would expect this to result in erroneously high MICs, not the erroneously low MICs we see when comparing Etest to BMD (i.e., false susceptibility). Importantly, these falsely-low MICs correlate with poor clinical outcomes, so we can't say Etest is a better test than BMD. CLSI and EUCAST now caution against use of Etest for colistin testing.

We next evaluated Sensititre panels, which seem to work pretty well, although one observes some errors right at the breakpoint (MIC of 2 µg/mL by BMD, 4 µg/mL by Sensititre, and vice versa). This is not unexpected for MIC testing, and I don't worry about it too much, although we do use caution if the MIC is 2 µg/mL, which is high and might indicate resistance. However, like Etest, Sensititre panels are labeled research-use-only (RUO) for colistin ... making their use complicated in the clinical lab.

This brings me back to my promise to discuss why there are no FDA-cleared tests for colistin susceptibility. It's pretty simple, actually: there is no FDA breakpoint for colistin. Commercial AST manufacturers in the U.S. must use FDA breakpoints (i.e., those listed in the drug prescribing information, aka the package insert), when submitting an AST to FDA for clearance. They cannot use CLSI (or other) breakpoints, so if there is no FDA breakpoint, it is impossible to get a test cleared by the FDA. The good news is, thanks to the 21st Century Cures Act, there will be resolution to this dilemma-within the next year. 21st Century Cures includes language that requires FDA to recognize breakpoints established by standard-setting organizations (such as CLSI), which they will publish on a website they update every 6 months. Diagnostic manufacturers will then be able to submit their systems for FDA clearance using these breakpoints. Many systems, including MicroScan and Vitek 2, have CE-IVD clearance for colistin on their panels used outside the U.S. These companies may be able to submit the data used for CE-IVD clearance (depending on how old they are) to FDA for clearance in the U.S., as of November 2018. Great news!

Ok, so now we're using Sensititre panels, testing colistin, and hopefully it won't be RUO for long ... life is good. But wait--the pharmacy calls to say they'd rather use polymyxin B as the polymyxin of choice at UCLA...  "Come on," I say, "don't tease me! There's no breakpoint for polymyxin B!" (They weren't teasing). What to do now? Well friends, this issue is the most recent mole I have to whack. I will say I don't know of any resistance mechanisms that affect colistin and not polymyxin B (or vice versa). Generally, colistin and polymyxin B MICs trend together. While some small MIC differences have been reported, I truly believe this is due to slight differences in the potency of powders used for colistin and polymyxin B testing (these are complicated mixtures of compounds; each lot is a little different), rather than any biological differences. While CLSI criteria permitting placement of an "or" between colistin and polymyxin B in M100 Table 1A (meaning labs could predict activity of one from the other) haven't been established (yet), I am leaning towards using colistin to predict polymyxin B MIC. Interpreting the MIC for polymyxin B is another issue--the pharmacokinetics differ considerably between colistin and polymyxin B. Regardless, we don't have an Enterobacteriaceae breakpoint for colistin (just an ECV, a topic for another post), so maybe it's a moot point since most testing requests are for Enterobacteriaceae. Sensititre does have polymyxin B on their RUO panels, but I don't think they'll be able to get FDA clearance for this, even after November 2017, since no one has established polymyxin B breakpoints (ok, technically there is an FDA breakpoint, but only for P. aeruginosa). Another mole just encountered: mcr-1, reported in LA county this year. What's next in this saga? Who knows ... but I feel like we're going to need a better mole-whacking mallet!

The above represents the thoughts of Dr. Romney Humphries, and not necessarily those of ASM.