The Surprising Plasticity of the SSV1 Archaeal Viral Genome

Viruses rely on the molecular machinery of their host for many of the functions necessary to generate their viral progeny. Their form of parasitism implies the idea that a compact viral genome would carry only the most necessary genes. A new report from the Journal of Virology refutes that idea and demonstrates that an archaeal virus, Sulfolobus spindle-shaped virus 1 (SSV1), can withstand mutations in 17 of its 35 genes while remaining replication competent.

These results are particularly surprising given the extreme environment in which SSV1 and its host, Sulfolobus solfatarticus, reside. These microbes were isolated from volcanic hot springs, where the temperature is 80°C and the pH 3. Many of the SSV1 genes are not homologous to other viral genes, and were assumed to be required for survival under these conditions. The dispensability of these genes, including one of the viral capsid protein genes, vp3, was unexpected by the scientific team led by senior scientist Kenneth Stedman. 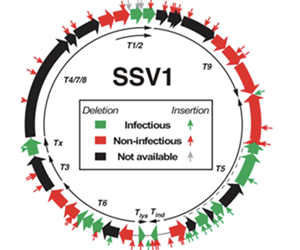 The SSV1 genome tolerates the DNA insertions necessary to generate shuttle vectors, allowing manipulation of its genome via traditional cloning methods. This manipulability means the SSV1 can be used as a tool to learn about microbial survival in the harsh hot springs conditions. SSV1 is a fusellovirus with a 15.5-kilobase, double-stranded DNA genome containing 35 open reading frames (ORFs). The best-characterized SSV1 genes are its integrase and genes encoding its structural proteins (VP1, VP2, VP3, and VP4). To better understand the function of other SSV1 genes, 78 mutant genomes were constructed and tested for their ability to infect Sulfolobus cells. The researchers found that only 11 genes, when mutated, rendered the virus noninfective (see figure, right). Disruption of 12 genes led to productive infection, and there was no data available for the additional 12 genes.

While the number of nonessential genes was surprising, the results allowed the research team to further refine the core fusellovirus viral genome. They did this first by comparing ORF homology among fusellovirus sequences, identifying 12 genes in common among all sequenced isolates. They then correlated these genes with the essential genes found in the screen, with 11 overlapping sequences between the two methods. By comparing these gene lists, the researchers determined the core genome to be less tolerant of mutagenesis than the overall genome. Core structural gene vp3 was not essential for infection, while a poorly conserved fusellovirus gene c102a was essential.

The dispensable nature of some of the structural genes was particularly surprising, given the importance of structural integrity not only to contain the viral genome, but also to attach and deliver that genome to host cells. Both vp1 and vp3 are highly conserved, but only vp1 was required for infection. The vp3 mutants remain infectious despite an altered morphology (see figure, right).

The results come with a few caveats. Essential genes were determined by the absence of bacterial infection, which a false negative may lead to incorrect conclusions. To prevent this, the researchers assessed each mutant in at least five independent infection assays. In each infection assay, only a single ORF was altered, so genetic redundancy may have masked essential gene functions—the large number of uncharacterized fusellovirus genes makes this difficult to assess. Characterizing the six unannotated core ORFs is a potential starting place to understand the replication cycle of this archaeal parasite. This could help better define the minimal SSV1 genome, which would improve the molecular tools scientists have to study both the bacteriophage itself and the Sulfolobus bacteria that they infect.