Ever since she was a little girl, Dr. Kathleen “Kate” Rubins knew she wanted to be a scientist. She conducted experiments in her backyard and later, in high school, worked with a group at her local county public health department on peer-to-peer research, infection and patient management on HIV. “I was hooked,” Rubins said. “From that moment on, I wanted to understand HIV infection from both the research and the medical side.” 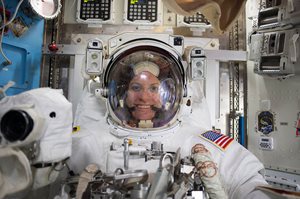 Kate Rubins gets ready for one of the two spacewalks she performed during her mission.

Ever since she was a little girl, Dr. Kathleen “Kate” Rubins knew she wanted to be a scientist. She conducted experiments in her backyard and later, in high school, worked with a group at her local county public health department on peer-to-peer research, infection and patient management on HIV. “I was hooked,” Rubins said. “From that moment on, I wanted to understand HIV infection from both the research and the medical side.”

Dr. Rubins followed her passion for virology all the way to NASA. She earned her B.S. in molecular biology at the University of California, San Diego, where her research focused on HIV-1 integration. She analyzed the mechanism of HIV integration, including several studies of HIV-1 integrase inhibitors and genome-wide analyses of HIV integration patterns into host genomic DNA.

In 2009, Rubins obtained her Ph.D. in cancer biology from Stanford University and, with the U.S. Army Medical Research Institute of Infectious Diseases and the Centers for Disease Control and Prevention (CDC), helped develop the first model of smallpox infection. She also developed a complete map of the poxvirus transcriptome and studied virus-host interactions using both in vitro and animal model systems. From here, Rubins applied for and received the opportunity to run her own research lab.

While a Fellow/Principal Investigator at the Whitehead Institute for Biomedical Research at MIT, she worked with a team of 14 researchers studying viral diseases that primarily affect Central and West Africa. She traveled to the Democratic Republic of the Congo to conduct research and supervise study sites. It was while she was at the Whitehead Institute that Rubins applied for the NASA program. “They had astronaut applications online,” she recalled. “It was a childhood dream of mine—to be an astronaut, biologist and a geologist. I didn’t think I had a chance, but I did apply!” She was selected in July 2009 as 1 of 14 members of the 20th NASA astronaut class. Then Rubins became the first person to sequence DNA in space. 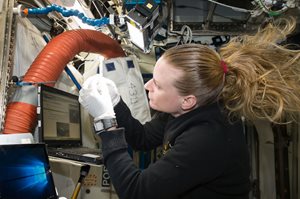 In performing the Biomolecule Sequencer investigation, Kate Rubins became the first person to sequence DNA in space, and sequenced more than 1 billion bases during her time aboard the International Space Station.

One of the experiments during this space mission, Expedition 48/49, was to see if DNA could be sequenced and analyzed in real-time, allowing for fast results in space environments. This operation of sampling DNA in space, coined “Biomolecule Sequencer” at NASA, was planned for a long time, with a team that spanned NASA’s Johnson Space Center, NASA’s Goddard Space Flight Center, NASA’s Ames Research Center, Weill Cornell Medical College, the University of California San Francisco and Oxford Nanopore Technologies. “It was so exciting to be able to do the experiment, get the reaction, and see the data come through in real time,” Rubins said. “It was such a great moment for all of the researchers that worked so hard for so many years on this project.”

The experiment demonstrated the ability to quickly assess genetic material of a sample. “We really wanted to look at anything to get a real-time answer while sequencing information,” Rubins explained. “Transferring data back down via spacecraft can take months. If you want an answer about infection or environmental sample [in space], now we can do that in real time.”

The success of the Biomolecule Sequencer experiment on Expedition 48/49 will have important applications moving forward, especially for astronaut health and physiological changes that can occur during space-flight, such as bone loss, fluid shifts and high levels of CO2 exposure. Operation Biomolecule Sequencer was the first time genome sequencing results were measured in space. 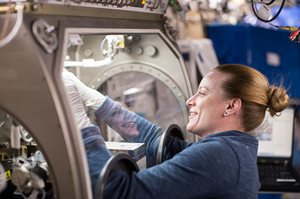 As keynote speaker at ASM Microbe 2017, Dr. Rubins will talk about real-time data analysis, the importance of microbial environments in orbit, and emerging technologies. Before she touches down in New Orleans in June, ASM chatted with her about her space-flight, life and career.

Can you describe your work on the smallpox model?

We were interested in gene expression in human monkeypox, which is very similar to smallpox—they’re 95% genome identical. Human monkeypox infections only occur in remote areas of the Democratic Republic of the Congo, so it was rare to get a glimpse of this disease.

Did your Bio-Safety Level 4 experience help you prepare for your space work?

A BSL4 suit weighs about 30 pounds, while a space suit weighs 300 pounds! In space you don’t have weight, but you do have mass. Working in a BSL4 suit was good training in thinking about where you put your hands and what you would do in emergency situations. The suits look similar, but it’s much more challenging to work in a space suit where you’re much more encumbered, less dexterous and have much more mass to move around. 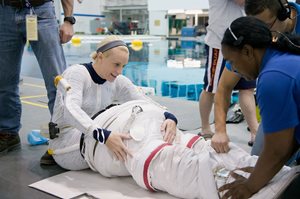 Training is two years for astronauts, and includes land and water survival. We also learned how to fly high-performance jets—there are a lot of parallels between aviation and space-flight. Lots of language training, as you need to learn how to be proficient in Russian. We spent a lot of time in Russia, Japan, Europe and Canada. Then there’s understanding all the spacecraft systems: all the various power sources, data, motion control systems, how to handle them and work with ground control teams. Last but not least, all the science! We have over 275 investigations during Expedition 48/49 and we were involved with more than 100 of those. We needed to learn how to execute experiments; some procedures were specific to specific experiments.

What was running through your mind in the first minutes of Expedition 48?

Right after launch it was all adrenaline. But then you focus: we have a lot of things to do as soon as we hit orbit in the spacecraft.

You’re an avid scuba diver. Any similarities between being in orbit and being underwater?

Definitely. I think that when you’re scuba diving, you have the force of water to work against, and there’s a lot of equipment. It’s a small view of what’s it like to be an astronaut.

What about space travel has changed you the most?

My perspective. When you’re orbiting the planet every 90 minutes, you see things at a whole “continent” level. You’re so close to the earth, but you’re not on it, you see the earth as it’s floating in the galaxy. It’s what you see in movies and on TV, but it’s a completely different thing to experience this beautiful, bright blue planet suspended in space.

Any words of encouragement for girls to get into science?

Encouraging all kids to go into science is incredible. If you look at little kids exploring their world, we could easily say most of us are naturally scientists when we’re young. Exposing folks to lab work and research at earlier ages and trying to get them to come up with questions they’d want to answer—that’s the kind of thing that drives a career. Getting someone to the point where they say “I’m really interested in the microbiome of the bottom of my shoe.” Those driving questions are the basis of the scientist’s work. They want to answer questions about the world around them.

What does the future of science look like to you? 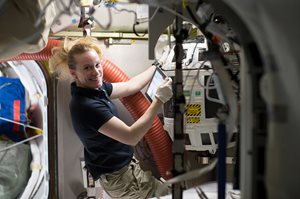 Kate Rubins works on one of over 275 scientific experiments during her 115-day tenure on the ISS.

In biology, we’re going to become merged with computer science and data analytics. Labs are going to become more dry labs than wet labs; in terms of genomics ,we’re at the equivalent time point as just having discovered the microscope. The critical thing is how we design experiments. Now we get a huge amount of data that’s not very meaningful if we don’t know how to interpret it. We use this massive amount of data to characterize things at the individual molecule level rather than a macroscopic level. And it will depend on the experiments we have done in the past.

Check out Kate’s Expedition 48 photos here. Rubins will also be a guest on ASM’s TWIV podcast, recording live from New Orleans in the ASM Booth on Saturday, June 3 at 2:30 p.m. CDT. You can watch the live stream on our Facebook page.