Out of Sight, but not Out of Mind: the Microbial World of Caves

Caves are unique ecosystems compared to the world above ground. It’s a world where erosion, tectonic forces, and microbes transform rock and water into magnificent sculptures and pools. Underground lakes lie in stillness, shards of rock hang from the ceilings, and all of this teems with invisible life. We are just starting to learn more about the microscopic critters living in caves. Caves hardly represent our everyday surroundings, so why go through the trouble to study cave microbes? How can they help us understand our world above ground? Here, we take a look at how cave microbes give us clues into the evolution of aerobic life, extremophiles, and antimicrobial resistance.

From the human perspective, caves represent one of the harshest environments on Earth. They lack sunlight, and their waters can be acidic and low in oxygen. In fact, conditions in many caves are thought be very similar to the conditions on the Earth’s surface for billions of years or to that on other planets. Studying microorganisms in anoxic cave environments can help us understand how life evolved. For the first 2 billion years of Earth’s history, oxygen did not exist in the atmosphere. Then, 2.3 billion years ago, bacteria evolved the ability to produce oxygen through photosynthesis.

What followed is the Great Oxygenation Event, where oxygen gas began to accumulate in the atmosphere after oxygen saturated the oceans. When anaerobic bacteria ruled the world, oxygen was poison. By killing off the anaerobes, the oxygenation of the atmosphere caused the first mass extinction on Earth. To shake things up even more, the oxygen reacted with methane in the atmosphere to create carbon dioxide. The reduced levels of methane in the atmosphere cooled the Earth significantly resulting in the oldest and longest ice age known to date. Even cyanobacteria began to suffer and die off. Eventually, microbes evolved to use oxygen, allowing organisms to grow faster and paving the way for more complex eukaryotic life. The anoxic waters in some caves embody a similar environment to Earth before oxygen, giving us a perfect place to study how aerobic life came to be.

A Home to Sulfur-Loving Bacteria

Caves provide an excellent abode for all sorts of extremophiles where microbes have evolved to get whatever nutrients they can get. In some caves, microbes have evolved to use hydrogen sulfide as energy and as a result, turns rocks into caves. Hydrogen sulfide mixes with minute amounts of oxygen to form sulfates. The bacteria use these sulfates for energy and excrete sulfuric acid as a waste product. The sulfuric acid dissolves the limestone and slowly creates a cave from the bottom up. Because these caves are created from the bottom, it is possible that these caves are truly concealed from the world above. 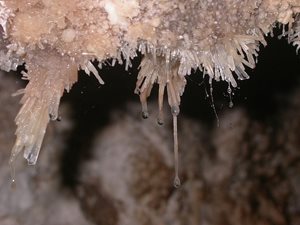 Sulfur-reducing bacteria also form special cave biofilms called “snottites” (Figure 1) that drip down the walls and hang from the ceiling. It literally looks like dripping mucus! Genomic analysis of snottite biofilms indicate that Acidithiobacillus species are primarily responsible for creating snottites. Because the snottites are full of sulfuric acid, sulfur-reducing bacteria have developed ways to thrive in the midst of their acidic waste products. Acidithiobacilllus species encode genes for cation transporters and hopanoid synthesis, shown to be crucial for survival in acidic environments. Since the oceans on Earth were acidic around the time life originated, studying these acid-loving microorganisms in caves can also teach us about how life originated.

Not only are cave microbes adapted to extreme conditions, they are also surprisingly resistant to many antimicrobials. Recently, scientists have found a bacterium from Lechuguilla cave resistant to most antibiotics. Four years prior, the same group of scientists found 93 culturable microorganisms in the Lechuguilla cave. Most of them were resistant to at least one antimicrobial. These are not “superbugs,” and antimicrobial resistance in microbes is a natural phenomena. Antibiotics are not something we have invented, but they are compounds naturally produced by bacteria to defend themselves from other species. Though we only discovered them 90 years ago, microbes have been using antimicrobials to fight for survival for millions of years. 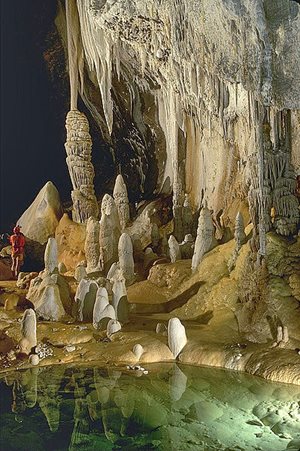 To study “natural” antimicrobial resistance, scientists need a cave hidden from anthropogenic influences. That is what makes Lechuguilla Cave so special (Figure 2). Lechuguilla Cave, located in New Mexico, is 4 million years old and since its discovery in 1986, has remained one of the most undisturbed caves in the world. Any surface water would take thousands of years to percolate through the rock that lie overhead into the cave. Thus, it is unlikely that life in this cave have been subjected to modern anthropogenic influences such as antibiotics. Accordingly, the bacteria in Lechuguilla Cave were generally not resistant to synthetic antibiotics designed in the lab.

New mechanisms of antimicrobial resistance were also identified from this cave, and researchers suspect that caves may also serve as potential reservoirs for novel antimicrobials. Microbes have evolved a diverse arsenal of chemicals to defend themselves from competitors and it is almost certain that there are many antimicrobials that we have not yet harnessed.

Life of a Cave Microbiologist

Studying cave microbes is not for the claustrophobic or the faint-hearted. It is part sport, part adventure, and part science. Imagine bringing down thousands of dollars in equipment on your back or squeezing through tight spaces. Imagine camping underground for a week and trying to work under very low light conditions. Without the convenience of a lab bench, experiments require creativity and resourcefulness. Sterility becomes tricky. And what may take five minutes to do in the lab, can take much more time to do in the cave. To learn more about the perspective of a cave microbiologist, listen to the epsiode (below) of Meet The Scientist where Carl Zimmer interviews cave microbiologist Hazel Barton.

Since the beginning of life on Earth, microbes have evolved to thrive in the most diverse of circumstances. These unique cave ecosystems have fostered microbial relationships different than their terrestrial counterparts, and scientists have a lot to learn about these microbial communities. Why study cave microbes? Caves provide a pristine environment relatively undisturbed by human activity where we can learn about the origins of life, extremophiles, and antibiotics in nature. Perhaps by studying the world beneath our feet, we can discover more about our terrestrial world.

Dr. Jennifer Tsang is the science communications and marketing coordinator at Addgene and a freelance science writer. She has completed a Ph.D. in microbiology studying bacterial motility and studied antimicrobial resistance as a postdoctoral fellow.