Toxoplasma: a Parasite That Knows No Boundaries 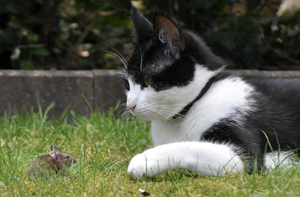 Toxoplasma gondii is an amazing parasite. This parasite is exceptionally polyxenous, meaning it is capable of infecting a wide range of organisms, in this case virtually all mammals and birds. Despite this variety of intermediate hosts, there is only one known definitive host in which T. gondii completes the sexual stages of its life cycle—cats. You might be tempted to say it prefers cats, but I tend to think that it does this out of respect for all of the other significantly more amiable creatures on earth. To add some intrigue, Toxoplasma appears to have adapted an interesting route to be transmitted from indeterminate hosts to cats. About 20 years ago research started to emerge that rodents infected with T. gondii lost their "innate aversion" to cats, which was replaced with an "imprudent attraction." Later research showed that the attraction may have been inappropriate in more ways than one! You could see how this would work out poorly for the rat, but spectacularly well for the parasite. More details about the life cycle can be found here.

Parasitic infections often bring to mind particular activities in specific regions of the world as the potential route to human infection. While T. gondii does have certain associations (cat litter boxes), it can be found in all parts of the globe and acquired in a variety of ways. The prevalence of serological evidence of human exposure to T. gondii (seroprevalence) ranges from 4 to 100% depending on the population evaluated—in the US, NHANES data from 2009-2010 puts this measure close to 13%. And how do you get it? Well, at the beginning of your life it can be acquired by vertical transmission from your mother, typically if she acquired the infection during pregnancy. Approximately 200,000 cases of congenital toxoplasmosis occur worldwide each year, and such infections are often asymptomatic until later in life, but can lead to serious neurological disorders, vision loss, or even death. Treatment is possible, and screening is feasible, but the value of screening all newborns is not clearly established. Maternal screening is sometimes recommended and neonatal diagnostic testing is routine in some states in the U.S. While most diagnostic testing for T. gondii infection involves PCR of various specimen types or serologic testing for IgG and IgM T. gondii-targeting antibodies, neonatal testing may also include measurement of IgA antibodies. You can also acquire T. gondii tissue cysts by eating undercooked meat of animals infected by the parasite, consuming food or water contaminated with fecal oocysts shed by cats, or rarely from receiving blood products or organ transplantation. Here is a great article about a toxoplasmosis outbreak of 100 cases caused by inadequately treated municipal water containing T. gondii oocysts. 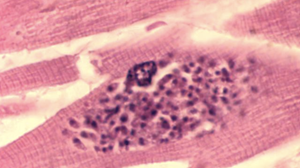 Once T. gondii gets inside a human host, the cysts or oocysts release sporozoites that infect a variety of host cell types, then multiply intracellularly, generating tachyzoites that are released and migrate via the blood to skeletal or cardiac muscle, brain, eyes or some other scary places to host a parasite, followed by multiplication as bradyzoites (which look like under-inflated footballs--perhaps they were named after Tom Brady) during the formation of tissue cysts. During the early stages of infection, people may experience flu-like symptoms and develop swollen lymph nodes (most commonly in the neck), or be asymptomatic. In the immunocompetent host, the cysts generally remain latent for years, or decades; these may remain latent cysts for life. If a new infection is established in an immunocompromised host, or if a latently infected host becomes immunocompromised, severe infectious consequences may result, including brain (encephalitis) or eye (retinitis or necrotizing retinochoroiditis) disease. Serological testing results must be interpreted with caution, given the high background of seropositivity in most regions and the tricky nature of measuring immune reaction products in immunocompromised hosts. A further complication in serologic test result interpretation is that anti-Toxoplasma IgM antibodies can persist for a long time (months to years) and therefore a positive anti-Toxoplasma IgM result does not establish acute infection. There is a Toxoplasma reference lab that can perform serologic test panels to help determine whether or not a patient has acute versus chronic infection. Toxoplasma PCR testing is generally only available at reference labs, but can be performed on a wide variety of specimen types given the many organ systems that may be involved; blood, urine, aqueous or vitreous fluid, CSF, various respiratory specimens, and amniotic fluid. The little monsters can also be seen with some common pathology stains, including Wright-Giemsa and Gomori methenamine silver (GMS). T. gondii can sometimes be isolated from patient specimens using cell culture or animal inoculation but these methods are seldom used clinically.