A recent news story made waves about how wooly mammoths died: it turns out that lone male mammoths were more likely to die in natural traps, implying that mammoths may have led a matriarchal lifestyle similar to that of present-day elephants. The study involved sequencing the DNA from available mammoth remains, which revealed a disproportionate number of male mammoth remains. Simply categorizing the remains based on sex allowed scientists to formulate hypotheses on mammoth social structure and behavior, in a way they wouldn’t have been able to do if the sex remained unknown.

Imagine if we could do the same for infectious disease studies. A new editorial from Sabra Klein, highlighting the importance of sex reporting in studies related to microbiology and immunology, suggests that we can.

Sex differences play a potential role in many different diseases. “Ebola was reported to be worse in men than in women; women with acute HIV infection show lower viral titers than men; even some cancers, like melanoma, are worse in men than in women,” ticked off Klein. Despite these known facts, “female mice are primarily used in melanoma studies in the lab.” Using a unisex model may hide key factors that play a role in pathogenesis in the opposite sex, whether it be increased susceptibility or decreased immunity.

It’s important to understand that the term “sex” as used here refers to the different chromosomes that compose an individual’s genome, rather than the more culturally construed term gender. Because the X and Y chromosomes contain different genes that promote different developmental and hormonal signaling throughout an individual’s lifespan, sex is now widely accepted to be a variable that can affect disease outcome. Unfortunately, the research record hasn’t consistently contained sex difference considerations.

In an ideal world, scientists would use both male and female models to better test whether sex is a factor in pathogenesis or immune response. In reality, most studies use a single sex in their animal model studies. Some labs prefer female mice because they are less aggressive, while others prefer male mice because hormonal fluxes are less likely to be a confounding variable. Historically, using animals of only one sex was sometimes even considered good practice, since it minimized hard-to-interpret sex differences.

However, even taking the extra step of documenting the animal sex used in studies would allow those reading the literature to determine whether this variable had been addressed in previous studies, or to make connections between sex and the course of disease. “The more you report, the more scientists can glean from all of the data,” said Klein. For example, “studies with results that don’t align can then look at sex as one of the factors that may contribute to those data.”

Klein knows how useful this information can be. Her lab focuses on the differences in infection and vaccination responses between males and females. One of the impetuses for the editorial involved her and her trainees’ frustration when looking through the literature. “Not a lot of people study sex differences in microbiology and immunology. There’s not much data on sex differences,” she said. That lack of reporting can be frustrating when she tries to compare her experimental data to previous studies and cannot find the sex of animals listed in a report’s methods section. Discussions of how to improve their studies inspired Klein and her students to write the mBio editorial. 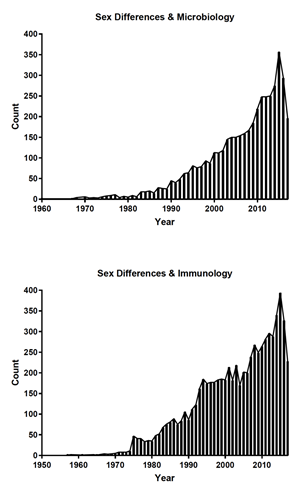 But interest in the role of sex and sex hormone signaling is increasing among microbial sciences researchers. As Klein pointed out in her editorial, PubMed searches for “sex differences” and either “microbiology” or “immunology” produce increasing numbers of studies on this quickly growing area (see right). However, literature searches would be even more useful if researchers simply included information on the sex of test subjects. Including these data would allow meta-comparisons across different studies and potentially point to variables like sex that might have affected experimental outcome. Disparate results from similar experiments might also be explained by including this information, helping resolve questions of study reproducibility.

Reporting should extend to primary cells taken from patients, said Klein, since hormonal signaling may lead to different gene expression patterns even in cells not associated with the endocrine or reproductive systems. B cells from men and women can have very different transcriptional profiles, which may affect experimental outcome if patient samples are skewed toward one sex. But immortalized cell lines may have accumulated a number of mutations throughout their genome, including on their sex chromosomes, so reporting the sex of the original donor is less important in these cases.

The Movement for Sex Reporting

The Institute of Medicine of the National Academies of Science began addressing the need for sex reporting several years ago, and convened a workshop on sex disparity in clinical trial participation in 2012. This followed the initiative of several individual journals, such as the Journal of the National Cancer Institute, to include sex-reporting guidelines in their instructions to authors. Other journals have since added similar guidelines, and the International Committee of Medical Journal Editors has recommended that editors standardize these guidelines across journals to facilitate comparison between studies. In 2015, the National Institutes of Health instituted a policy to ensure consideration of sex as a biological variable in preclinical research. Klein sees journal guidelines as a good checkpoint for whether this policy is being followed.

Starting in 2018, the American Society for Microbiology is incorporating guidelines for sex reporting in its instruction to authors. These guidelines will affect the approximately one-third of reports published in the ten primary literature journals that incorporate human or animal subjects or primary cell experiments. Incorporating these guidelines will contribute to the universal goal of scientists to improve scientific rigor and reproducibility.

Klein is among the researchers pleased to see this incorporation. “Women aren’t small men, nor are men large women,” she said. Reporting sex differences and considering sex as a variable in infectious disease research takes scientists one step closer toward understanding the observed differences conferred by sex chromosomes.