New Insight into Archaeal Members of the Human Microbiome

Microbiome researchers often use initial correlative studies, such as those suggesting roles of the human microbiome in multiple sclerosis or diabetes, to explore causative relationships. These studies find connections within the complex microbiome and external variables, often relying on sequencing the 16S ribosomal RNA genes to identify which bacteria and archaea are present. However, the primer pairs conventionally used in microbiome studies underestimate the number of archaeal species found, and completely disregard nonprokaryote microbiome members. A new mBio study finds that optimizing these primer sequences can uncover a much larger variety of the archaea that are part of the human microbiome.

mBiojournal: First insights into the diverse human archaeome: specific archaea detection in the gastrointestinal tract, lung, nose, and on skin.

Though Bacteria and Archaea are separate domains of life, both consist of single-celled organisms without nuclei (aka. prokaryotes). Conventional primer pairs are more likely to amplify bacterial sequences than archaeal sequences. This bias toward bacterial sequences inspired senior author Christine Moissl-Eichinger to modify these tools for better characterization of human-associated archaea. She led a research team that modified the primer pairs as well as the processing and analysis of the resulting sequencing reads. “In this study, we mainly optimized primer selection and PCR,” says Moissl-Eichinger, “and found that in silico analyses are not always congruent with the capacity of primers to tackle the archaeome in real experiments.” Combining computer and hands-on experiments allowed the scientific team to identify the best tools to characterize the archaeal diversity found in different niches throughout the human body. 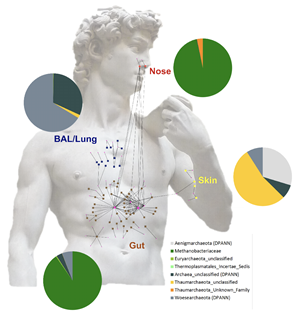 The archaeome of the human body is site specific and harbors novel archaea signatures. Source

Investigating the archaeal population separately from the bacterial population revealed a large number of archaeal sequences in different parts of the human microbiome (see figure, right). “We found the archaeome of the human body follows a biogeographic pattern: anaerobic methanogens were mainly identified in the anoxic intestinal tract, and thaumarchaeal signatures were confirmed to be present on the skin,” says Moissl-Eichinger. “All in all, we retrieved a very interesting, new insight into the human archaeome, providing an important prerequisite for subsequent studies, which need to confirm and deepen our findings.”

Moissl-Eichinger’s discoveries included a few surprises. In addition to obtaining unidentified archaeal reads from lung samples, the sequences also identified archaeal types previously not known to grow on the human body. “We were most surprised by the detection of Methanobacterium signatures in intestinal biopsies, as well as by the detection of Woesarchaeota signatures in lung and skin samples,” says Moissl-Eichinger. This discovery raises the question of what functions these microbiome members may carry out, and whether they differ from functions observed in populations outside of the human microbiome.

No archaeal species has yet been found that causes human disease, and the study here made no associations between archaeal species and disease in people. However, “methanogens are considered as keystone species in complex microbiomes,” says Moissl-Eichinger, so some archaeal species “could be involved in bacteria-driven pathogenic processes.” Moissl-Eichinger also points out that these data do not rule out archaea as pathogens; doing so would require more work to correlate disease patterns with the presence and/or abundance of archaeal species, similar to those bacteria-based microbiome studies have found. These broad characterizations lay the groundwork for those future studies.

A lack of well-defined tools is one of the reasons microbiome studies have not included non-bacterial species, but even rare species can play integral roles in a microbial community, emphasizing the need to fully expand microbiome studies to additional microbial types. “Although complexity increases when we try to consider these groups as well, they need to be recognized and studied, along with the bacteriome, because  microorganisms are interconnected by various processes, including syntrophy,” says Moissl-Eichinger. “We also recognize that archaea are often not fully assessed even in metagenome-based studies, due to the gaps in databases and the limited number of cultivated reference archaea—in particular from the human microbiome. Much more work is now necessary to assess the full picture of the human microbiome.”