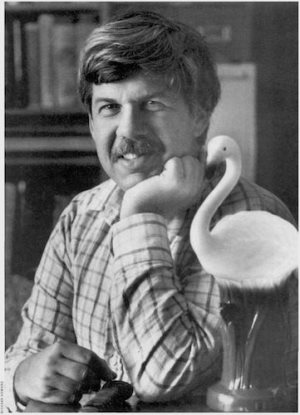 Stephen Jay Gould was famous for his scientific work and writings on animals, living and extinct, but increasingly recognized the importance of microbes in the last ten years of his life. Source.

In 1992, the late biologist and writer Stephen Jay Gould reacted to the discovery of a massive subterranean fungus in Michigan. It was front page news at the New York Times, declared the “World's Largest Organism.” Gould wrote a now obscure essay about this “humongous fungus” in Natural History magazine where he famously kept a long-running column. Reflecting on how each small mushroom of the giant fungus falsely appeared like an organism unto itself, Gould concluded the essay by stating that, “Nature is not an intrinsic harmony of clearly defined units.” Rather, he continued, living entities “interact fuzzily at their borders” to the extent that one “cannot even formulate an unambiguous definition of an individual at the single level of organic bodies.” He turned to poetry in the final sentence, asking: “Does nature herself then sing Walt Whitman’s Song of Myself?”

Given what we know about microbiomes and microbial ecology today, Gould’s evocation of Whitman’s “I contain multitudes” those 25 years ago was a remarkably creative foresight. At the time, there were only glimpses into microbial diversity in natural environments. This was 3 years before the first bacterial genome was published in 1995, well before metagenome sequencing, and 16 years before the Human Microbiome Project. The science journalist Ed Yong who went on to popularize the Walt Whitman phrase as the title of his 2016 book on individuality with respect to the human microbiome, was 10 years old in 1992. 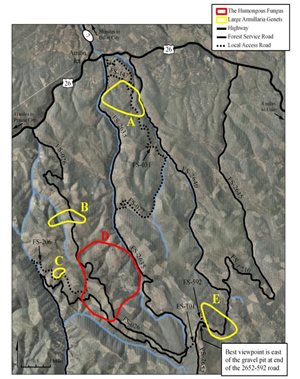 Instead of microbiomes and symbiosis, it was the lifecycle of the fungus that led Gould to transition into wider thoughts on individuality and evolution. He explained how the fungal colony (a species of Armillaria) began with the germination of microscopic spores and grew ever larger as mycelial filaments spread beneath the landscape. He then detailed the genetic tests used to demonstrate that the entire “30-acre fungus” originated from a single clone, meaning that it is one contiguous biological individual. Before long, Gould went down the rabbit hole, questioning “who” exactly are the “individuals” that natural selection acts upon? From his perspective, individuality “encompasses different levels of biological organization.” He added, “Selection does not only sort organisms, as Darwin thought; it operates simultaneously at several levels of a genealogical hierarchy-on genes and cell lineages 'below' organisms, and on populations and species 'above' organisms.”

Many of Gould’s views on evolution were and still are contested, including this apparent pitch for multilevel selection theory. In multilevel selection, natural selection can act not only on genes, but simultaneously on more complex levels of biological organization, like organisms and populations. More recently, the theory has been tested specifically in the context of microbial systems. Multilevel selection theory is also relevant to the active discourse between microbiologists who frame a host species (like an animal) plus its microbiota as an ecological unit known as a holobiont, having a collective hologenome, and those who find faults in this concept. So, long story short, many still ponder these same existential questions that Gould raised in the humongous fungus essay.

Putting the multilevel selection discussion aside, there is no doubt that Gould and others realized in the early 1990s that fungi, bacteria, and Carl Woese’s discovery of archaea were leading to a revolution in biology. The full title of Gould’s essay, “A Humongous Fungus Among Us,” was a play on a phrase used as a schoolyard taunt when he was a child. If the kids at school wanted to put pressure on a person in a group, they would say, “There’s a fungus among us!” It is clear to me looking back at the essay, that in 1992, the “fungus among us” in terms of biology was the feeling that the field was changing to encompass the immense diversity and complexity of the microbial world, soon to be revealed by genomic sequencing technologies.

Stephen Jay Gould would be 76 years old in 2017; I imagine that if he was still alive, he would have continued to write about microbes with increasing frequency and depth. Though like many others he was attracted more to dinosaurs than to bacteria from a young age, Gould embraced the importance of microbes before his death in 2002. Another one of his essays on microbes was adapted for the Washington Post in 1996 as “Planet of the Bacteria.” That article emboldened up-and-coming microbiologists of the day, including Jonathan Eisen. We will never know if Gould himself might have compiled an entire book on the subject of biological individuality and evolution through the lens of modern microbial science, but we can certainly honor and credit his creativity and vision.