Most fungal pathogens are capable of growing in culture, and once they do, they may be identified and characterized. The most common fungal genus causing human infections, Candida, grows quite quickly in culture and most species can be readily identified by standard methods. Some Candida species may even be identified with a rapid direct blood assay developed recently. For many of the other common fungi, however, culture may be low-yield or, even when successful, very slow. It is not uncommon for pathogenic molds to take from several days to weeks to grow, and fungal cultures are commonly held for 3-4 weeks for this reason. While culture has value in that it can provide a definitive identification, and potentially allow for antifungal susceptibility testing, let's explore some of the fungal laboratory tests that can be ordered while you wait for that culture. 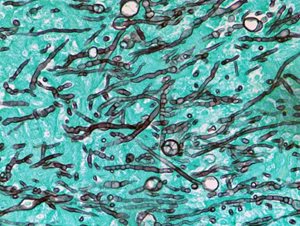 One of the first results a provider receives back from the lab is microscopy with a morphologic description. A fungal stain with Calcofluor White performed on direct patient specimens in the microbiology laboratory will detect virtually any pathogenic fungi when present in sufficient abundance, and many pathogenic fungi can be detected with a Gram stain. Common stains such Gomori methenamine silver (GMS) and hematoxylin and eosin (H&E) or other specialized stains are performed in the histopathology or cytology lab on FFPE. Morphologic description on histopathology or cytology may provide one of the first clues: yeast, budding yeast, hyphae or other more specific features may be noted. While the morphology may help narrow the differential (e.g., narrow, septate hyphae or broad, ribbon-like hyphae), definitive identification is seldom possible. For a detailed review on this topic, please see "Histopathologic Diagnosis of Fungal Infections in the 21st Century" Direct fluorescent antibody microscopy assays are widely used for Pneumocystis jirovecii, and one was noted to perform well relative to a molecular assay. While immunohistochemistry has found broad application for viral pathogens, this technique has not gained a foothold for fungal diagnostics, largely due to issues related to cross-reactivity.

Cryptococcus is a prominent cause of opportunistic respiratory and CNS infections in immunocompromised patients. Cryptococcus actually grows fairly well in culture, but there are excellent antigen tests (latex agglutination or enzyme immunoassays) available in most clinical microbiology labs that can give same-day results. The antigen test may be performed using either cerebrospinal fluid (CSF) or serum, and comparison of several cryptococcal antigen tests some time ago demonstrated their high sensitivity/specificity. Additionally, Cryptococcus is included in a meningitis syndromic PCR panel.

1,3-beta-D-glucan is a constituent of the cell wall for many clinically relevant fungi, and may be detected in serum or plasma during invasive fungal infections. Unfortunately, the specificity of tests for 1,3-beta-D-glucan is limited for a variety of reasons, including that this antigen is also produced by some species of bacteria (including Pseudomonas aeruginosa and Streptococcus pneumoniae) and may enter circulation through the use of some therapeutic agents or devices. The clinical utility of tests for 1,3-beta-D-glucan is a matter of debate, but the attraction ofa non-invasive and rapid test that may help avoid or guide antifungal treatment for a critically ill patient is very understandable. 1,3-beta-d-glucan elevation is a good predictor of Pneumocystis jirovecii infection in immunocompromised patients, especially in the specific setting of AIDS patients with respiratory symptoms,

Galactomannan is another fungal cell wall compound that may be detected in serum or bronchoalveolar lavage (BAL) to assist in the evaluation of potential invasive fungal infections. The most commonly used serum galactomannan assay is often referred to as the "Aspergillus antigen test,“ not surprising in that galactomannan is produced by Aspergillus. Aspergillus is one of the most common fungal pathogens in immunocompromised patients, and Aspergillus is actually part of the product name. Such a name should be used with caution, however, as other fungal pathogens that may cause similar symptoms, and appear similar in fungal stains, produce galactomannan, including Fusarium, Paecilomyces, Alternaria, Histoplasma capsulatum and Talaromyces (Penicillium) marneffei. Galactomannan is also a common component of many food products, and there is some concern that mucositis or GI injury can lead to translocation of galactomannan from the GI tract to the blood and potentially cause false positive test results. A large Cochrane review meta-analysis of 54 studies that evaluated a serum galactomannan assay to aid in diagnosis of invasive aspergillosis in immunocompromised patients found considerable heterogeneity of results among the studies. The cut-off value for test positivity also had a considerable impact on test performance—at a cut-off test result of 0.5 the sensitivity and specificity were 78 and 85%, respectively, whereas at a cut-off of 1.5 the sensitivity and specificity were 63 and 93%. Bronchoalveolar lavage (BAL) specimens may also be evaluated for galactomannan. Tests for 1,3-beta-D-glucan and galactomannan can be performed quickly (same day if available in your local lab, longer if sent to reference lab) and provide additional information regarding potential invasive fungal infection, but the results need to be interpreted cautiously.

While there have been attempts to develop diagnostic serological assays (detecting patient antibodies for a specific organism / antigen) for many of the common fungal pathogens (such as Aspergillus), these have not generally performed well as diagnostic tools due to the high rate of exposure to these organisms in the general population. For some of the more rarely encountered organisms, notably the dimorphic fungi, serological tests are available. In general, sensitivity of serologic tests for dimorphic fungi lags behind that of antigen tests, but serologic testing for Coccidioides is reasonably effective, and the performance of several serological Coccidioides assays has been compared, finding that utilizing multiple serological testing modalities (complement fixation, immunodiffusion, ELISA) may be necessary for immunocompromised patients. Some reference laboratories also offer serologic test panels for this purpose.

There are quite a few molecular tests available for fungal culture isolates, but for our purposes we will consider a scenario where information is needed  before  culture results are available. It's worth noting that extracting DNA from fungal cells can be challenging due to the fungal cell wall, and special nucleic acid isolation protocols need to be employed to improve success. There have been a lot of research efforts and laboratory developed tests (LDTs) using molecular methods targeted at fungal pathogens, especially for Aspergillus, but as of yet there are few FDA-cleared or widely employed assays. Perhaps the most utilized direct-from-specimen fungal NAATs in labs today are LDTs for the detection of Pneumocystis jirovecii. A NAAT panel for molds was evaluated for use with direct clinical specimens with mixed results. A complicating factor in the development of analytically sensitive (low limit of detection) fungal NAATs is that fungi are ubiquitous in the environment, and contamination is a major concern. Host carriage of low levels of Aspergillus or Pneumocystis may not be uncommon either.

Broad-range PCR and sequencing is another currently utilized method for attempting to identify fungi in clinical specimens, including both fresh tissue samples and even formalin-fixed paraffin-embedded (FFPE) tissue samples. The concept is that PCR is directed at a genetic target with highly conserved "book-end" primer sites (to provide the broad range) and a central region with enough variability to allow sequence-based identification of the amplicon source. Such targets for fungi include 28S rDNA or, more commonly, the ribosomal DNA internal transcribed spacer (ITS) region (this is a similar concept to 16S sequencing utilized for bacteria). For some genera, such as Aspergillus, additional targets may need to be added to achieve species-level identification. Sometimes a surgical or biopsy specimen is sent only to the surgical pathology laboratory (in formalin) because there was no suspicion of an infectious etiology, but histopathology reveals hyphae—what can be done? While FFPE processing leads to considerable degradation of nucleic acid, broad-range PCR may still be attempted, albeit with somewhat lower yield than for fresh specimens. Some hospital labs are developing the capacity to perform this type of testing as an LDT, although this is still primarily in the reference lab domain. Typically, receiving results back from a reference lab for this type of testing will take several days to a week. You may have seen at ASM Microbe 2017 a study evaluating next-generation sequencing of nucleic acid in plasma as a method to detect fungal pathogens without an invasive procedure, but as of yet there are very little data on the clinical performance of this type of assay, and the cost of the test is quite high.

A variety of non-culture based methods exist for the detection of fungal pathogens, although most of the results must be interpreted cautiously. Sequencing and other molecular technologies may become more mainstream in the coming years, but as of yet there remains considerable room for improvement in fungal diagnostics. If you feel there is an important fungal testing concept that wasn't covered above, please join in the conversation below.

The above represents the opinions of Dr. Matthew Pettengill and not necessarily of the American Society for Microbiology.