In July 2016 in a hotel lobby in Nashville, Tenn., microbiologist Dr. Paul Lawson, Ph.D., received a standing ovation. Dr. Lawson is a Professor in the Department of Microbiology and Plant Biology at the University of Oklahoma. Close to 400 clinical and anaerobe microbiologists paid tribute to him in this manner at the biennial congress of the Anaerobe Society of the Americas.

What exciting accomplishment would cause anaerobe microbiologists to celebrate? Did Dr. Lawson discover a new species? Had he figured out a new and faster culture technique for these slowly growing bacteria? Maybe he invented a "gas trapper" to rid the lab of all those stinky metabolic end products of anaerobes. No, no and no. Dr. Lawson and colleagues in essence blocked a potential catastrophe in renaming one of the most commonly encountered organisms in health care—and the #1 cause of health care-associated infections in the US—C. difficile.

C. difficile is the most common causative agent of antibiotic-associated diarrhea in both health care and community settings worldwide. The term C. diff colitis ("colitis" means inflammation of the colon) has a global presence. The general public knows this condition as one of the most serious side effects of prolonged use and/or overuse of antibiotics.

What would happen if the name of one of the most commonly known microorganisms—by scientists and lay public alike—were changed? For starters, microbiology laboratories would need to update their reporting schemes and inform their clients: clinicians and other healthcare providers. Educational updates in such name changes are no easy tasks for any clinic or hospital system. Laboratory information systems would have to be updated. The largest effects would be felt in the commercial sector; companies would have to update product names, packaging, trademarks, etc. The public health sector and the lay public would also need reeducation in new names such as "P diff." The acronym CDAD (C. diff-associated diarrhea) would become PDAD, and CDI (C. diff infection) would be PDI. 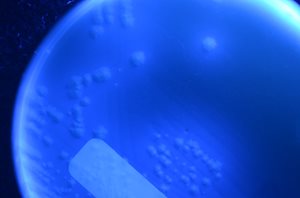 Upon hearing news of this potential name change, a group of clinical and anaerobe microbiologists—Dr. Lawson, Diane Citron, and Drs. Tyrrell and Finegold—offered a "counterproposal" of sorts. They proposed the name Clostridioides difficile. The proposed name would separate C. difficile from other members in cluster I but would allow it to retain the moniker "C. diff." In their 2016 article, Lawson et al. underline the importance of "internationally ubiquitous" terms such as C. diff. They emphasize the years which would have been needed to make the changes to P. diff as well as the possible confusion and negative effects on patient care. Enormous amounts of time and money in health care dollars could have been spent in making a change to P. difficile.

The approved name change to Clostridioides difficile was published officially in 2016 in the International Journal of Systematic and Evolutionary Microbiology. The only other known species within the Clostridioides genus at this moment is Clostridioides mangenotii, previously known as Clostridium mangenotii. C. mangenotii has been found in human feces, marine sediments and soil.

The outcome of the story of the renaming of Propionibacterium acnes to Cutibacterium acnes is less satisfying. Although this renaming is also a clinical problem, the negative downstream issues with renaming are not as far-reaching as "Peptoclostridium difficile" would have been.

Propionibacterium acnes is a gram-positive anaerobic rod which is so named for its causal association with acne vulgaris. It is a normal commensal of the human skin and can cause a wide variety of diseases such as central nervous system shunt infections, joint infections, endocarditis and osteomyelitis.

Finally, clinical microbiology laboratories are now grappling with the downstream susceptibility testing issues associated with the renaming of Enterobacter aerogenes to Klebsiella aerogenes. The Enterobacter genus has been known in the past for expression of AmpC beta-lactamases, and clinical microbiology laboratories often use reporting comments to guide clinicians away from the use of certain antimicrobials in Enterobacter spp. isolates. Is this different with K. aerogenes? Do the intrinsic resistance rules for Enterobacter spp. apply to K. aerogenes or not? Does the name change affect the antimicrobial profile? No, but the change drastically affects the antimicrobial guidance laboratories try to provide to clinicians.

Traditionally, we clinical microbiologists have been taught to think of the Enterobacteriaceae in two groups with different resistance patterns: the SPICE bugs (Serratia, Providencia, "Indole-positive" Proteus species, Citrobacter, and Enterobacter species) and the KEP bugs (Klebsiella pneumoniae, Escherichia coli,  and occasional Proteus species). These two groups differ in the resistance genes that they typically carry. The SPICE bugs carry inducible, chromosomal beta-lactamase genes known as AmpCs. The KEP bugs, on the other hand, can carry extended spectrum beta-lactamase (ESBL) genes found on plasmids. Many laboratories attempt to guide empiric therapy for these bugs with the use of reporting comments. However, the KEP bugs now include the AmpC-carrying organism K. aerogenes. Laboratories will need to re-educate clinicians about the split in the Klebsiella genus, which now contains organisms carrying ESBLs and those carrying AmpCs. Furthermore, there are numerous guidelines from CLSI and other organizations concerning appropriate antimicrobial testing and reporting for the Enterobacter or the Klebsiella genus that will now need major revisions (e.g., ESBL testing has been applicable in the past to all Klebsiella spp. but is not applicable for K. aerogenes). There is more to come from CLSI on this!

Taxonomy is sometimes misconstrued as boring lists of categories, but in truth is vital to understanding the diversity of the world around us. These taxonomic changes are important as we further our understanding of microorganism phylogeny, but such changes can be messy, with large impacts on public health, isolate reporting, and antimicrobial susceptibility reporting. Taxonomists currently make the final decisions on reclassifying and renaming of microorganisms. However, clinical microbiologists should continue to be involved in taxonomic updates so that future updates can be less disruptive.

The above represents the opinions of Dr. Audrey Schuetz and not necessarily of the American Society for Microbiology.

Audrey Schuetz is Associate Professor of Laboratory Medicine and Pathology at Mayo Clinic College of Medicine and Science in Rochester, Minnesota.