Nothing New Under the Sun: Detecting Babesia as it Reemerges

The unfortunate New Englander who discovers that he or she has been bitten by a deer tick (Ixodes scapularis), its engorged body fat and glassy from its blood meal, is likely to be preoccupied first by the process of extracting the bug's mouthparts and, immediately after, by the fear of having been infected with Lyme disease. The diagnosis of Lyme disease, which includes a combination of clinical and laboratory findings that vary depending on the stage of infection, was discussed in a previous Bugs & Drugs post. But Borrelia burgdorferi is not the only pathogen that is commonly spread by ticks in the Northeast United States: the parasite Babesia microti has been rapidly asserting its prominence as a tick-borne infection in the same region. 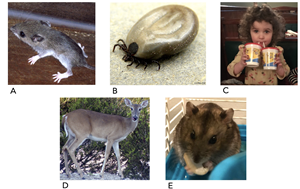 Babesia are intraerythrocytic parasites of the phylum Apicomplexa, which includes such diverse pathogens as Toxoplasma, Cryptosporidium and Plasmodium species. B. microti is the primary species seen in the Northeast US; B. divergens is typically seen in Europe. The white-footed mouse (Peromyscus leucopus) is the main reservoir and I. scapularis the vector (Figure 1), although Babesia can also be acquired from a blood transfusion. The infection is frequently asymptomatic and may resolve without intervention. When symptoms do occur, they are often nonspecific (fever, headache, fatigue); notable laboratory findings include thrombocytopenia, hemolytic anemia and elevated liver enzymes. Severe disease, with manifestations including acute respiratory distress syndrome (ARDS) and disseminated intravascular coagulation (DIC), is most often seen in asplenic patients or those affected by immunocompromising conditions such as AIDS or chemotherapy-induced immunosuppression. Treatment consists of either azithromycin plus atovaquone or clindamycin plus quinine; exchange transfusion is sometimes employed as well in the setting of a high parasite burden.

Although it is often described as an "emerging" infectious disease, babesiosis, like many infections so labeled, is not in fact a new disease. It was first described in the late 19th century as a cause of febrile hemoglobinuria in cattle, and by the mid-20th century it was recognized as a cause of infection in humans. However, in the New England states where it is primarily identified (Massachusetts, Connecticut, Maine, New Hampshire and Rhode Island), babesiosis has been increasing in incidence over the past several years; in Massachusetts the annual incidence rate more than doubled from 3.1 cases per 100,000 population in 2011 to 8.0 in 2014, the most recent year for which the CDC has available data. Babesia is also found in New York, New Jersey, and the Upper Midwest, primarily Michigan and Wisconsin. The rise in incidence is thought to be due to a number of factors, including an expansion of the white-tailed deer population (while deer do not play a direct role in the Babesia life cycle, they do provide a major source of food for adult ticks, thereby sustaining the tick population), increasing human activity in wilderness areas, and even bumper crops of acorns that have allowed the white-footed mouse population to thrive in recent years. Increased testing and diagnosis arising from growing awareness of the disease has also contributed to the higher incidence rate.

The mainstay of Babesia diagnosis is as old as the pathogen itself: light microscopy. On Giemsa-stained peripheral blood smears, Babesia can be seen in its ring-form trophozoite and tear-drop shaped merozoite stages, which classically appear as a "Maltese-cross tetrad" (Figure 2). The trophozoites often closely resemble the small ring-form trophozoites of Plasmodium species, particularly P. falciparum, and multiple ring forms are often seen in a single red blood cell, as in P. falciparum. Accurate distinction between these two pathogens is critical, however, as they require different therapeutic approaches. A number of clues can assist the clinical microbiologist in making this distinction. The observation of schizonts or gametocytes is indicative of Plasmodium infection, as these forms of Babesia are not seen in human blood. Babesia ring-form trophozoites are more pleomorphic and vacuolated than the equivalent stage in Plasmodium species, which are usually more uniformly round, while the classic Maltese-cross merozoite tetrad, although not often seen in practice, is diagnostic of Babesia. The observation of extracellular ring forms is also suggestive of Babesia.

Another helpful diagnostic tool in the distinction between Babesia and Plasmodium, which is even older than the microscope, is the patient's history. There is minimal overlap between the geographic locations where the two parasites live, so a patient who has never left New England and is found to have intraerythrocytic ring-form parasites on blood smear almost certainly has babesiosis and not malaria (rare cases of locally acquired "airport malaria" notwithstanding). While parasites' places of residence are limited by factors such as climate and host population, however, human itineraries are not so circumscribed--thus if a patient who lives in the Boston suburbs but recently returned recently from a trip to visit family in Nigeria presents with fevers and is found to be parasitemic, history alone will not suffice to determine which parasite is causing her symptoms.

While microscopy remains the primary means of diagnosis for intraerythrocytic parasites, there are, as with almost all pathogens, newer techniques that are beginning to play an important role in the diagnostic process. A rapid malaria antigen test, which uses lateral flow immunochromatography, allows for simple, prompt detection of a common malaria antigen in the blood and, if positive, can also identify whether an antigen specific to P. falciparum is present. Such tests are also of value both in resource-limited settings and in any hospital where prompt identification of a blood parasite to the genus or species level by an appropriately trained clinical microbiologist is not always available (e.g., in the middle of the night). While no equivalent test is yet available for Babesia, a negative malaria antigen test in the setting of parasitemia, given a compatible clinical scenario, is suggestive of babesiosis.

PCR assays for B. microti are available and may be positive at very low levels of parasitemia that are not detected by smear. However, the results of such a test are generally considerably delayed compared to a smear review. Serology is not typically useful, as antibody levels are not yet detectable at the time of symptom onset, while positive titers in the absence of symptoms or detectable parasitemia likely represent past infection and are not alone an indication for treatment. PCR and serology may prove to be useful, however, in screening donated blood for the prevention of transfusion-acquired Babesia; while the US blood supply is not currently routinely tested for Babesia, recent and ongoing studies have been evaluating the utility and cost-effectiveness of different screening methods.

There is one further technique for the diagnosis of Babesia, which, unsurprisingly, is very rarely performed in the clinical setting--but is fun to read about: hamster inoculation. In this method, hamsters are injected with blood from a human with suspected babesiosis; Giemsa-stained smears of the animal's blood are then examined microscopically at weekly intervals for parasites. In the past, this method was used to detect low-level parasitemia that could not be identified on direct smears from the patient's blood. The sensitivity of PCR has now superseded the need for animal inoculation in such scenarios, but hamster may very occasionally have a role in diagnosis if the viability of organisms detected only by PCR is in question. (Hamsters have also served as the main animal model for experimental investigations of babesiosis, including early therapeutic evaluations.)

Back to the Bite

Which of these tests, then, should be used to determine whether a tick-bitten patient has acquired Babesia? In most cases, none of them! An otherwise healthy person who remains asymptomatic following a tick bite does not generally need any evaluation for Babesia, as the Infectious Diseases Society of America does not recommend treatment for asymptomatic individuals even if they test positive for Babesia. (Of note, there is no Babesia equivalent of the single prophylactic dose of doxycycline that is sometimes used to reduce the risk of Lyme disease in patients who find an engorged tick on their bodies in an endemic area).

Should symptoms suggestive of babesiosis develop in a patient who resides in an endemic area (whether or not they can recall a tick bite), a thin Giemsa-stained blood smear, as described above, is typically the first step in diagnosis. If the initial smear is negative but clinical suspicion is high, subsequent smears may be obtained over a period of days to increase yield; PCR may also be useful in this setting. A positive smear result should include the percent parasitemia, as this may affect the treatment regimen selected and can be monitored for response to therapy. Testing for Lyme disease should also be considered in patients diagnosed with Babesia (and vice versa), as ticks are commonly coinfected with B. burgdorferi and B. microti and may transmit both during a blood meal.

Among the effects of shifting environments, growing and moving populations, and climate change has been the emergence (and re-emergence) of infectious pathogens of every kind, requiring adaptation and quick learning on the part of clinical microbiologists, infectious diseases clinicians, and the public. Fortunately, while many people are hearing about babesiosis for the first time, it is not, after all, a new disease, and in many cases a good history and a decent microscope are all that are needed to diagnose it.

The above represents the opinions of Dr. Thea Brennan-Krohn, and not necessarily of the American Society for Microbiology.