Scientists have known for years that Fusobacterium nucleatum is linked to colorectal cancer. F. nucleatum has been described as an “a commensal turned pathogen”—it is part of the human oral and intestinal microbiome, but has been linked to a number of human diseases, including GI disorders, cardiovascular disease, adverse pregnancy outcomes, rheumatoid arthritis, respiratory tract infections, and others. The pathogenic etiology has been tied to the T cell-mediated adaptive immune response. F. nucleatum inhibits protective T-cell proliferation and induces T-cell apoptosis, leading to immunosuppressive tumor growth (cancer) in susceptible patients. 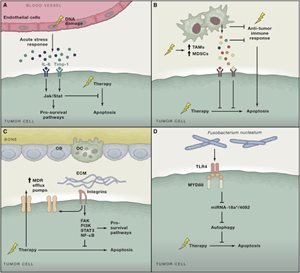 Figure 1. (click to enlarge) The chemotherapeutic response may be linked to the tumor microenvironment. F. nucleatum is a previously unrecognized chemoresistance mediator in colorectal cancer. Source

In a 2017 paper, researchers at the University of Michigan reported a link between F. nucleatum and chemotherapy resistance (also known as chemoresistance), due to bacterial targeting of the tumor intracellular signaling network that increased cell autophagy. Autophagy, or the intracellular degradation system in eukaryotic cells, is a crucial component of normal cell growth and homeostasis. However, unchecked upregulation of autophagy can boost tumorigenesis, due to increased intracellular recycling that can provide important nutrients and ATP for growing cancer cells. The researchers saw that an increased relative abundance of F. nucleatum may control cancer chemoresistance by manipulating interactions between cell signaling intermediates in tumor cells. Cellular targets of F. nucleatum (miRNAs which have downstream effects on immune system modulators Toll-like receptor 4 and MYD88) indirectly activate autophagy pathways (Fig. 1). When scientists inhibited autophagy pathways with lysosomal inhibitors, chemotherapeutic agents were again effective.

F. nucleatum is a gram-negative, non-spore-forming anaerobe, and can be differentiated from other commensal bacteria by its secreted factors and toxins, including leukotoxin, endotoxin, hemolysin, hemagglutinin, and adhesin (FadA). F. nucleatum is able to colonize, invade systemically, and induce tumorigenic responses in humans. It is an opportunistic pathogen for which no suitable vaccines exist, so treatment is dependent on antibiotics. In 2013, Kostic et al. demonstrated that Fusobacterium increases tumor multiplicity, and selectively recruits tumor-infiltrating myeloid cells. This can promote tumor progression. In addition to these cancer-promoting mechanisms, we are now learning that F. nucleatum promotes colorectal cancer chemoresistance.

It is unknown whether F. nucleatum causes similar effects in other cancers. The lead author on the study, Weiping Zou, states, “We think—we don’t have data by the way—that the imbalance of the microbiome in the gut means this bacteria is enriched, maybe because of the chemotherapy itself.” He also states, “We treat patients with chemotherapy so that it will ultimately induce tumor cell apoptosis. But some cancer cells have a way to avoid apoptosis that is induced by chemotherapy. Those cells escape from the apoptosis process by activating a cell-survival mechanism called autophagy. That mechanism protects cancer cells from destructing.”