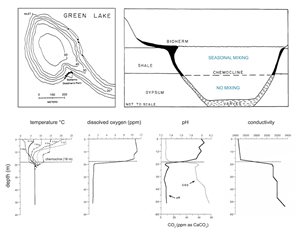 Figure 1. Contour map of Green Lake (top left) and depth profile across the lake basin, showing the position of the chemocline and composition of the bedrock (right). Several key physical and chemical parameters of the lake are shown below, measured from the surface to the lake bottom. Adapted from Hilfinger and Mullins 1997.

There are spectacular places where microbes grow to become bizarre macroscopic forms.  Think of the colorful microbial mats in Yellowstone National Park, the stromatolites of Shark Bay in Australia, the microbialites of Great Salt Lake in Utah, or strange “pinnacles” growing at the bottom of frigid lakes in Antarctica. For most intrepid microbiologists, Australia and Antarctica are a bit beyond the reach of a weekend adventure. However, remarkable microbial structures are closer to home than you might think. This is the story of microbial reefs that grow in the village of Fayetteville, NY, not far from the city of Syracuse.

Massive glaciers retreated from the area around modern day Green Lakes State Park at the end of the last ice age, creating two small lakes with unique physical characteristics. The larger of the two lakes, Green Lake, is 500 meters wide and over 50 meters deep. That’s unusually deep for a lake of this size. For comparison, Oneida Lake, just north of Green Lake, is 9 kilometers wide and has a maximum depth of 17 meters. There is evidence that the area of Green Lake was once a plunge-pool at the base of a gigantic waterfall. According to this theory, the waterfall eroded the land and left behind the deep basin that became the lake. 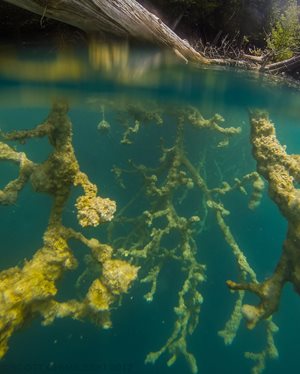 Water layers formed with Green Lake over time as a result of it’s unique physical and geological features. Ground water flows into Green Lake through mineral-rich bedrock that lines the deepest parts of the lake. This water is more dense and saltier relative to the rain and snowmelt that enters the lake from the surface. The two different water chemistries meet and form a boundary zone called a chemocline, located 18 to 20 meters below the surface. The top layer of water above the chemocline turns over and changes in temperature throughout the year as is typical for most lakes. However the layer below the chemocline does not mix, holding at a near constant 7°C across the seasons. Lakes like this that do not fully mix are called meromictic lakes.

The layers of Green Lake are distinct habitats for microbial life. Anaerobic species live in the anoxic and sulfurous zone below the chemocline. At the chemocline, phototrophic purple sulfur bacteria grow and aggregate into dense pink blooms. The purple sulfur bacteria use hydrogen sulfide produced by the anaerobic species below while harvesting light coming from the surface. The uppermost region of the lake is the domain of photosynthetic species of diatoms and cyanobacteria. All fallen trees and branches that extend underwater are covered with thick microbial mats made by several groups of cyanobacteria, including Synechococcus species. The activity of the cyanobacteria promotes the precipitation of calcite, producing a calcium carbonate crust that builds up during seasonal cycles.

Figure 3. (click to enlarge) Google Earth view of the microbial reefs at Deadman’s Point (left; marked with arrow) and Deadman’s Point as seen from the lake shore (right).

The same combination of microbial activity and water chemistry that makes the crust on fallen trees has produced clusters of moundlike microbial reefs along the lakeshore. The largest reef is at Deadman’s Point, accessible via a trail that meanders around Green Lake’s perimeter. Deadman’s point is a bioherm, a type of organic reef made of calcium carbonate that slowly increases in size. It’s carpeted with beds of thread-like cyanobacterial mats. Bioherms arose in several south-facing points on the shore. These are the areas where cyanobacteria thrive and increase the overall rate of calcite precipitation, driving the incremental expansion of the reef. Only the uppermost layer is the living microbial mat, while the layers within the reef’s core are where the microbial communities existed many seasons in the past. 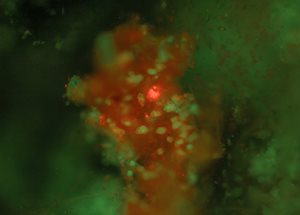 Green Lake is accessible to millions of people within the fourth most populous U.S. state, but the microbiology there is no less exotic than more famous, far-off sites. The different layers within the lake, each with its own composition of microbial species, makes Green Lake almost like a giant aquatic Winogradsky column. The lake is an ecological experiment that’s been running for eons, and it never even required a microbiologist to set it up. Now, knowing the geological and chemical properties of the lake, we discover which microbes live in which zones within the lake. We learn about their lifestyles and how they interact with other species. There is no limit to the unique environments, no limit to the investigation of species and their microscale interactions, whether in Yellowstone or in New York.

Figure 5. Red autofluorescence of cyanobacterial threads within the microbial mats.

All photographs in this post taken by Scott Chimileski