Strep throat isn't just Strep anymore! The most recent organism linked to bacterial pharyngitis is the anaerobic bacterium Fusobacterium necrophorum. Find out how this and other organisms that cause pharyngitis are diagnosed.

Although it's still snowing up here in Minnesota in April, spring has supposedly arrived. Along with that, our Streptococcus testing rates have finally started declining. This year was a big year for our Group A Streptococcus PCR—just under 50% positivity.

Related to this, consider the following scenario: A college student goes to her health care clinic with complaints of sore throat and general malaise for the past couple of days. The student denies runny nose, cough or hoarseness. The nurse swabs the patient's throat and performs a rapid molecular PCR-based assay for "strep throat" in his office. It is negative. The nurse tells the patient that she likely has a viral infection. However, he still sends the throat swab to a microbiology laboratory for further testing. It turns out that this was a good decision.

Was he worried about a false-negative result? Probably not... But what about other bacterial causes of pharyngitis? 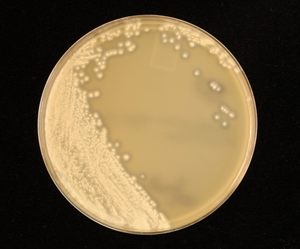 However, this patient had pharyngitis caused by Fusobacterium necrophorum, confirmed by PCR. Fusobacterium necrophorum is a gram-negative anaerobic bacillus and is the most common cause of Lemierre syndrome, or infectious thrombophlebitis of the internal jugular vein (i.e., inflammation of the vein and subsequent clot). Lemierre syndrome is an infrequent but often devastating complication of infection by Fusobacterium. Infected clots (emboli) in the blood vessels often lead to emboli elsewhere in the body, where abscesses can form because antibiotics cannot penetrate the clots. Dr. Robert Centor's laboratory at the University of Alabama at Birmingham has performed much of the investigation in the area of Fusobacterium pharyngitis. In fact, the four-item prediction rule for clinical guidance of the diagnosis of streptococcal pharyngitis—the Centor score—was developed by Dr. Centor in the 1980s. I heard Dr. Centor speak at the Anaerobe meeting held by the Anaerobe Society of the Americas in 2016 on his research concerning Fusobacterium pharyngitis. In his 2015 study, PCR-based testing for F. necrophorum, beta-hemolytic Streptococcus, and Mycoplasma pneumoniae was performed on throat swabs from university students with pharyngitis and from healthy controls. F. necrophorum was detected in 20.5% of patients with pharyngitis and only 9.4% of asymptomatic students. In fact, F. necrophorum was detected more often than was beta-hemolytic Streptococcus; higher rates of Fusobacterium than Group A Streptococcus in pharyngitis also been described in other studies.

Some European laboratories routinely perform anaerobic culture of throat swabs. One group has reported isolation of F. necrophorum by culture from >15% of throat swabs from tonsillitis patients who are 18 to 32 years old, who are routinely cultured for anaerobes, while some authors suggest routinely testing patients from 10 to 40 years old.

Culturing Fusobacterium from throat swabs has been difficult. Anaerobic cultures are not routinely performed for throat swabs, given the overgrowth of aerobic bacteria on anaerobic plates and the large numbers of normal anaerobic flora that would grow on such plates, making it difficult to fish out Fusobacterium colonies. The mouth and oropharynx of a healthy individual contain a large quantity of anaerobes of many different types. Dr. Jen Dien Bard and colleagues worked with Laurie and Mike Cox of Anaerobe Systems to assess prevalence of Fusobacterium pharyngitis in the pediatric population using PCR and culture techniques. This study was interesting for several reasons. First, they found that only 1.9% of pharyngitis patients  under 14 years old were positive for F. necrophorum, compared to 13.5% in the 14 to 20 year age range. Second, positivity by PCR was similar to positivity rate by culture, with only 1 patient positive by PCR alone. For culture, the authors used various types of selective media which inhibited contaminating oral flora. They pointed out that egg yolk agar with kanamycin, vancomycin and josamycin was the best potential screening method for F. necrophorum because of the potential to decrease normal oral flora and allow for growth of F. necrophorum.

Audrey Schuetz is Associate Professor of Laboratory Medicine and Pathology at Mayo Clinic College of Medicine and Science in Rochester, Minnesota.