Detection of antibiotic resistance is vital to proper treatment and containment of potential outbreaks. The Antibiotic Resistance (AR) Laboratory Network connects healthcare facilities, state and local labs, and CDC to quickly identify and contain drug-resistance before itcan spread. Learn more about the AR Lab Network in a free webinar, summarized on the latest Bugs and Drugs.

Remember the major news story about the drug-resistant Pseudomonas aeruginosa outbreak in a skilled nursing facility? You don't, because the hard-to-treat isolate was detected and contained before it could spread. This is one of the success stories from the new Antibiotic Resistance Laboratory Network (AR Lab Network), a nationwide system to rapidly detect antibiotic resistance in health care, food and the community.

This positive example of AR Lab Network implementation will be presented as part of a webinar about the ARLN to be held on April 25, 2018.

Webinar: Clinical and Public Health Laboratory Partnership to Stop the Spread of CRE and Drug-Resistant Candida

As part of the webinar, Massimo Pacilli of the Chicago Department of Public Health (CDPH) will present the Chicago P. aeruginosa case. Once ventilated patients were diagnosed with a P. aeruginosa infection, collaborations between the CDPH, the Centers for Disease Control and Prevention (CDC), the AR Lab Network regional lab in Wisconsin, and academic partners helped quickly identify the strain as one producing an uncommon and dangerous carbapenemase (Verona integron-encoded metallo-beta-lactamase, or VIM). This swift identification led to a rapid response to contain the spread of the microbe. According to Pacilli, "CDPH's success in controlling the outbreak relied heavily on the increased ability to conduct surveillance testing provided by AR Lab Network." 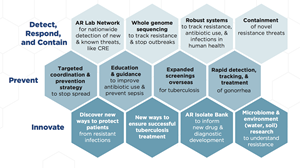 The ARLN plays a foundational role in the CDC strategy to combat drug resistance. Source.

The AR Lab Network testing plays a critical role in the CDC's containment strategy to prevent the spread of new or rare kinds of antibiotic resistance. Through testing done in labs in 50 states, five cities, Puerto Rico, and seven U.S. regions that help track changes in resistance so that local public health workers can quickly identify and respond to outbreaks. The AR Lab Network regional labs can perform tests such as DNA sequencing that may not be available at every state and local lab.

How does ARLN surveillance testing work? Two additional experts, David Warshauer of the Wisconsin state Lab of Hygiene and Maroya Walters of the CDC, will join Pacilli to discuss their experiences with the AR Lab Network. Join the webinar to hear more about the types of isolates requested from clinical lab partners, how isolates are tested and how isolates should be submitted to a state or local health departments.

Quickly identifying resistant isolates is essential for proper therapy and for implementing additional measures to prevent their spread. State and local labs can help healthcare facilities test and characterize bacteria and fungal resistance, like the emerging threat of Candida auris. Detection of resistance initiates collaboration between the state and regional labs and the lab where the isolate was found to determine potential transmission routes, setting the stage for intervention from the local public health officials.

Early detection and rapid response can keep drug resistance from spreading to other patients, health care workers, or community members, which also helps keep its discovery out of the headlines. No news is good news, as the saying goes, and this team of health care workers, clinical microbiologists, epidemiologists and public health officials are hard at work to keep drug-resistance outbreaks out of the headlines.