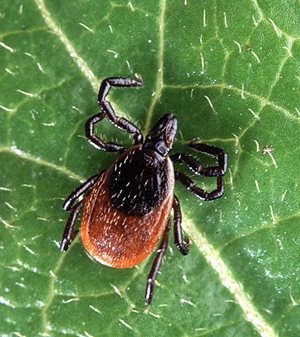 It’s now early May, and as spring tauntingly plots its arrival, it simultaneously heralds the emergence of new life. Trees begin to bud and flowers start to bloom. Birds busily gather nesting materials, and the poppy seed-sized nymphal stage of Ixodes scapularis ravenously emerges in search of its first blood meal.

Ixodes scapularis, commonly known as the deer tick, is the primary vector of Borrelia burgdorferi in the United States. According to the CDC, this flagellated spirochete bacterium causes approximately 30,000 cases of Lyme disease in the U.S. each year. The most recognizable symptom of early, untreated Lyme disease is erythema migrans, the “bulls-eye rash.” In fact, the presence of erythema migrans is the only symptom distinct enough to be diagnostic of Lyme in the absence of laboratory testing. Erythema migrans typically develops 7-14 days post-tick-bite and gradually expands, reaching sizes of 12 to 35 cm in diameter. The classic appearance of the “bulls-eye rash” consists of a circular red center surrounded by a region of central clearing and one or more red outer rings. However, at varying points during infection erythema migrans may also appear as an amorphous flat rash with no central clearing (homogenous erythema), or a rash with no central redness (central clearing rash). 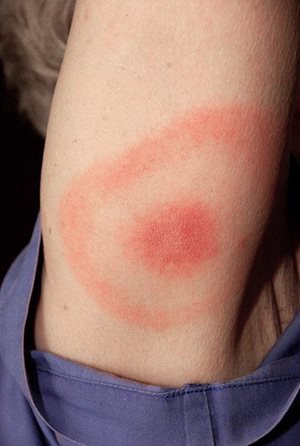 So why is erythema migrans linked to Lyme disease? What causes the unique appearance of the bulls-eye rash? Why does its appearance change over the course of infection, and why does it look so different from the bites of other insect and arachnids? The key difference is the presence of the microbe. When an insect or arachnid that isn’t carrying disease bites a human host, foreign components in the saliva generate an allergic response. Histamine production is increased, white blood cells are recruited, and an itchy, red welt develops at the site of the bite. But because B. burgdoferi actually causes infection of the skin, the development of erythema migrans depends not only on the innate immune response of the host, but also the pathogenic properties of the bacteria. Let’s dig a little deeper to gain a better understanding of the host-pathogen interactions that are at play!

Once B. burgdorferi enters the skin, the tick bite and the presence of bacteria in the dermis initiate the innate immune response of the host. Meanwhile, the spirochetes replicate locally and spread away from the point of entry at speeds of ~1-4 μm per second, or a little over half of an inch per hour at maximum speeds. As a result, the bullseye rash consists of two inflammatory reactions: one to the salivary proteins that stay put, and one to the bacteria that are moving away from the site of the bite. As the microbes migrate outward, the redness of the rash expands, and erythema migrans develops.

To better understand the appearance and behavior of the bulls-eye rash, Dhruv K. Vig and colleagues from the University of Arizona in Tucson developed a mathematical model to make predictions about bacterial density as a function of time during the spread of erythema migrans. Using this model, researchers were able to reproduce all three erythema migrans rash morphologies, and they discovered that motility patterns of the microbe and how quickly macrophages are cleared from the infection site determine which rash type will be seen.

The model predicted that erythema migrans begins as a small, homogeneous rash surrounding the site of the tick bite. Because the innate immune response of the host is most strongly activated at the center of the rash, the majority of bacteria are cleared from the center of the rash within about a week. However, bacteria on the edge of the rash continue spreading outward and direct the immune response to follow. To simulate the central erythema morphology, spirochetes needed to move back to the site of the tick bite to create the target of the bull’s-eye, but it was unclear what caused this resurgence. It has been hypothesized that the resurging bacteria effectively act as a decoy to the immune system and promote the spread of infection by allowing more translocating bacteria to escape. However, no significant increase in immune evasion has yet been linked to the behavior. Therefore, this aspect of B. burgdorferi’s pathogenesis demands further investigation. 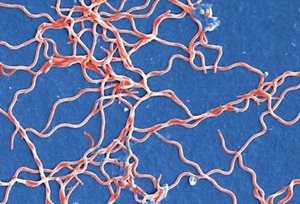 In addition to the above predictions about the motility patterns of B. burgdorferi, researchers made an important discovery about the role of the host’s immune system in relation to the appearance of erythema migrans. They concluded that the more slowly macrophages are cleared from the infection site, the more homogenous the rash will appear. A 4-fold increase in the rate of macrophage clearing transformed a homogenous erythema to a central clearing rash, and the central erythema bull’s-eye occurred when macrophages were cleared 8 times faster.

A recent study conducted by Adriana Marques and colleagues at the NIH sought to gain a more complete understanding of the human response to B. burgdorferi in the skin. To do so, they biopsied the advancing border of erythema migrans lesions of adult patients with untreated early Lyme disease and the skin of healthy volunteers with no history of Lyme. Total RNA was extracted from each biopsy, and samples were globally assessed via microarray analysis and RT-PCR to identify what human genes are expressed under each condition.

As one might expect, there were many changes in expression during early infection. Not surprisingly, major processes associated with the immune response, such as phagocytosis, chemotaxis, and bacteria/virus pattern recognition were heightened. The highest numbers of altered genes were interferon (IFN)-regulated genes (IRGs). IFN proteins are vital to the regulation of innate and acquired immunity. All IFNs have antiviral properties, and many are also instrumental in the defense against bacteria and even the inhibition/regression of tumor cell development. However, researchers discovered evidence that B. burgdorferi can exploit IFN pathways to inhibit T-lymphocyte function and cause localized immunosuppression. They also identified a decrease in adhesion of connective tissue and cell viability in erythema migrans. This immunosuppression and breakdown of connective tissues make it easier for bacteria to swim through and invade the skin. Overall, these data pointed out some specific strategies that the host uses to fight off infection as well as a number of ways that the microbe attempts to manipulate these immunological processes in order to change the outcome of infection.

Erythema migrans is an intradermal battle between spirochete and host. As B. burgdorferi fights to suppress and evade the immune system, its host employs an arsenal of IFN cytokines and macrophages to localize the damage and phagocytize the foreign invaders. Depending on how the motility patterns of the microbe and the clearing rates of the macrophages play out, one of three erythema migrans rash morphologies may result. Undoubtedly, there is room for further investigation into the cause of B. burgdorferi’s unique motility patterns, and a deeper look at the pathogenesis of other tick and vector borne diseases may provide some insight about this topic. However, as spring approaches and a new generation of I. scapularis emerges to take its place in the food chain, it is prudent to remember the signs and symptoms of erythema migrans. The ability to accurately identify this infection may ensure timely and targeted medical treatment.