How to Be a Successful Foodborne Pathogen: Step 2, Survive Decontamination

mBiosphere has previously covered how Salmonella has a specific genetic expression pattern that allows it to colonize tomatoes, the first step of a successful foodborne pathogen. New research in mBio suggests a genetic trick that allows S. enterica and Listeria monocytogenes to pass a second step on their way to causing human disease: entering a viable-but-nonculturable (VBNC) state when exposed to environmental stresses such as chlorine.

Chlorine treatment is used on industrial food processing equipment to remove any contaminating pathogens, and is sometimes used directly on the produce as well (this is safe as long as the food is rinsed thoroughly before being eaten). First author Callum Highmore and senior scientist C. William Keevil led a research team that demonstrated very low chlorine concentrations can induce a VNBC state in some Listeria or Salmonella, respectively, while higher concentrations cause the entire population to become VBNC. 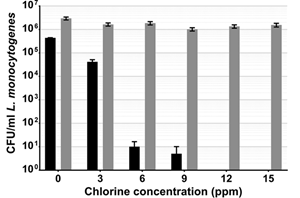 These VBNC bacteria can avoid detection by traditional culture techniques. The researchers counted the bacteria surviving chlorine wash by direct viable counts (DVC), using microscopy to enumerate the bacteria. The two methods produced vastly different results (see figure), with the majority of bacteria surviving a two-minute wash but undetectable when grown on selective media. Importantly, the VBNC Listeria were just as virulent as those that remained culturable, causing similar levels of disease in a C. elegans model and contradicting previous experiments that suggested VBNC Listeria are avirulent.

This is an important distinction in bacterial detection that will have some real-world implications for controlling foodborne disease outbreaks. Chlorine use is fairly widespread in industry practice, and its concentration needs to be balanced so that bacteria are killed but the produce isn’t damaged. The researchers point to the trends toward health-conscious eating habits and the increase in leafy green consumption in the United Kingdom as a potential source for more disease outbreaks and recalls, unless detection improves.

How chlorine kills bacteria remains a mystery as well, as the researchers point out. Learning the mechanism by which it can be bacteriocidal and how that differs from inducing a VBNC state will help develop better decontamination methods. Until then, make sure to clean your fruits and vegetables vigorously before eating them.