Can Colistin Resistance be Reversed? 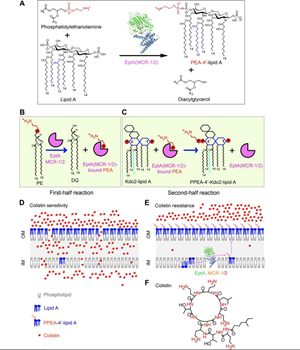 Schemes of chemical mechanism and colistin resistance for MCR-1, MCR-2, and EptA. (A) Chemical reaction for the transfer to pEtN to lipid A of LPS by MCR2. (B) The reaction begins with removal of pEtN from phosphoethanolamine (PE) and (C) then transfers it to lipid A. (D) Cartoon of the model proposed for the bacterial surface structure of colistin-sensitive E. coli. (E) Working model for structural modification of LPS on bacterial surface in colistin resistance. (F) Chemical structure of colistin. Source.

To understand the mBio study’s implications, it’s important to know how colistin, a polymyxin drug, acts to kill bacteria. Polymyxins are most effective against gram-negative bacteria, because of their interactions with lipopolysaccharide (LPS) on the outer bacterial envelope. The negative charge of LPS contributes to the negative charge of the bacterial surface, which allows the positively charged polymyxins to interact with and disrupt the bacterial membrane. MCR-1 transfers a positively charged phosphoethanolamine (pEtN) onto the LPS molecule, decreasing the bacterial surface charge and lowering its affinity for polymyxin interaction (see figure, right).

Many bacteria modify LPS with pEtN and other modifications; these modifications influence membrane architecture. The research team, led by first author Yongchang Xu and senior scientist Youjun Feng, compared EptA, a Neisseria chromosomally encoded pEtN-transferase that confers intrinsic resistance to polymyxin drugs, to MCR-1 and MCR-2. They found structural similarities between EptA, MCR-1, and MCR-2, including a conserved pEtN substrate-binding cavity, but found that swapping different structural domains between EptA and MCR-  decreased function. This suggests that EptA, MCR-1, and MCR-2 share a similar mechanism in pEtN catalysis but have slightly different structural requirements for substrate recognition.

The structure-function studies are the foundation for designing inhibitors that may stop MCR-1 function and rescue colistin antibacterial activity. Good news has come on that front already, with a report from Antimicrobial Agents and Chemotherapy that describes a new potential MCR-1 inhibitor.

AAC Journal: Pterostilbene, a potential MCR-1 inhibitor that enhances the efficacy of polymyxin B

Researchers screened 115 natural compounds to synergize with polymyxin activity against mcr-1-positive clinical isolates. First author Yonglin Zhou, senior scientist Xumeng Deng, and their colleagues looked for compounds that could potentiate the activity of either polymyxin E (another name for colistin) or polymyxin B, a close chemical relative with the same antibacterial mechanism. The authors found that the plant-derived compound pterostilbene decreased the minimal inhibitory concentration of polymyxin B for mcr-1-positive E. coli strains from 8 to 1 μg/ml. The compound on its own had no effect on microbial growth.

The authors showed that using pterostilbene and polymyxin B together increased treatment efficacy in mice infected with one of the same mcr-1-expressing E. coli strains. The combination therapy reduced the bacterial loads in the spleen and liver 10-fold compared to mice treated with only polymyxin B, and increased mouse survival in a lethal sepsis model of infection. The authors propose using pterostilbene, safe for human consumption at doses up to 250 mg per day, in combination with polymyxins to treat colistin-resistant Enterobacteriaceae. 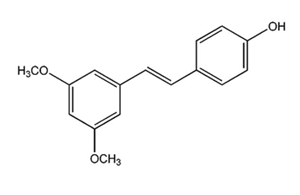 The chemical structure of pterostilbene. Source.

Zhou et al. propose that the pterstilbene inhibits MCR-1 activity, allowing the polymyxin to resume its normal interactions with the bacterial outer membrane, though is yet to be definitively shown. If true, combining this new compound (molecular structure shown at right) with the molecular interaction data from above may allow scientists to chemically modify the pterostilbene to improve its MCR-1 inhibition. Regardless, this discovery shows promise to extend the usefulness of colistin despite the continued spread of plasmid-borne resistance, as scientists continue to search for new antibacterial compounds to use against drug-resistant infections.

For the latest concerning polymyxin B, polymyxin E, and colistin, check out a recent review from Clinical Microbiology Reviews.