Plants and the Bacteria at the Root of it All

Watch where you step! Soil-dwelling bacteria may hold the key to the future of agriculture.

Spring is in the air (or at least soon will be), and with it comes warmth, rain, blossoms, and the telltale scent of freshly dampened earth. The season may also strike a desire in many to venture outdoors to enjoy nature, and maybe even get some gardening done. This year, while smelling your flowers or working in the soil, take a second to think about what factors contribute to the life growing around you. While sun and rain are vital to the health of plants, the soil in which they grow may be the most important element of them all. Soil is formed by five key factors: parent materials, climate, topography, time, and living organisms. In fact, soil houses a diverse bacterial community, which contributes greatly to the health of the plants growing from it.

The World Beneath Our Feet

The first indication that bacteria in the soil influence the health of plants came in the late 1800s when Dutch scientist, Martinus Beijerinck, discovered Bacterium radicicola living in the roots of legume plants. Beijerinck found that this bacterial species converts atmospheric nitrogen into a form bioavailable to the plant in a process he called nitrogen fixation. These bacteria also do more than serve as a source of nitrogen for the plants that they inhabit.

In 1904, the German scientist Lorenz Hiltner introduced the term “rhizosphere”, based on Beijerinck’s findings and the discovery of several other nitrogen fixing, soil-dwelling bacteria. He defined the rhizosphere as the region surrounding a plant’s roots where microbes live and contribute to the health of the plant. He hypothesized that these microbes are recruited by nutrients released from the plant’s roots. Extensive research since Hiltner’s introduction of the rhizosphere has confirmed his hypothesis that it supports a dense and robust microbial population. In fact, one study found up to 10 times more bacteria (around 1010 bacteria per gram of soil) dwell in the regions near the roots of wild oats compared with the bulk soil outside of the rhizosphere. These populations of rhizobacteria (rhizosphere-dwelling bacteria) are quite diverse as well, with estimates that up to 52,000 different taxa are represented in a single rhizosphere.

As Hiltner hypothesized, plants also influence bacteria within and attract bacteria to their rhizosphere by releasing chemicals and nutrients from their roots, known as rhizodeposits. Each plant releases unique rhizodeposits, so the rhizosphere of one plant is often comprised of different groups of bacteria than other plants. 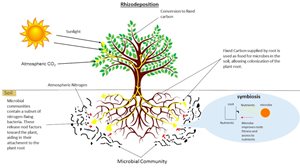 Bacteria benefit from the plant nutrients provided by the roots, but plants can benefit from their rhizobacteria as well. Bacteria known as Plant Growth-Promoting Rhizobacteria (PGPR) are diverse and represent a wide range of phyla. They also perform a wide variety of growth-promoting functions.

One of the most extensively studied groups of PGPRs is that of the various Azospirillum species. Early studies of Azospirilla attributed their growth-promoting ability to their nitrogen-fixing properties. However, some species produce plant-signaling molecules known as phytohormones. These hormones, which are normally produced by plants, help to regulate everything from budding to plant stem lengths. A phytohormone produced by A. brasilense is an auxin, indole-3-acetic acid (IAA), which stimulates longer root lengths from the plants exposed to them.

However, microbes within a plant’s rhizosphere provide more than just beneficial nutrients for plants. Some bacteria serve as a first line of a plant’s defense against pathogenic bacteria, fungi and other parasites. Pseudomonas species have been implicated as protective bacteria that suppress root-fungus disease. Streptomyces diastatochromogenes produces an antibiotic that inhibits the growth of potato scab disease-causing bacteria. Bacillus thuringiensis helps protect plants from a common plant pest, fungus gnats. When eaten by fungus gnat larvae, B. thuringiensis spores  germinate in the insect gut and begin producing insecticidal crystal-forming proteins (Cry). For the interested home gardener, these spores are readily found at local plant care stores in pellet form.

Harvesting the Power of the Rhizosphere

The harmful nature of fertilizers and pesticides for the environment has fueled increased interest in the potential use of PGPR as alternatives to these chemicals in agricultural settings. Upon learning of the nitrogen-fixing benefits of bacteria for crops, Hiltner developed and supplied seeds and plants inoculated with beneficial bacteria to farmers. Known as rhizobial inoculants, these measures are used in agricultural settings even today to ensure healthier, more environmentally fit crops.

Even prior to the use of rhizobial inoculants, early Native American farmers exploited the benefits of nitrogen fixation by using an agricultural practice known as companion planting. This technique relies on different plants being grown together to enhance one another’s health. By interplanting corn, squash, and beans, 17th century and earlier Native Americans harnessed what we now know to be the ability of legumes to attract nitrogen fixing bacteria. Companion planting is a technique still used today for combinations of plants such as sage and cabbage or dill, tomatoes, and basil.

Today, there are many efforts aimed at identifying and harnessing the beneficial properties of more PGPB. Insights gained from classic PGPR such as B. thuringiensis are being put to use in completely new ways. For instance, knowledge of the insect-specific toxic activity of the Cry proteins of B. thuringiensis has resulted in genetic engineering of plants to express these toxins to produce pest-resistant crops.

Over a century of research has helped us to better understand the complex relationship between soil bacteria and the plants that they help. This has even led to changes in how we grow our crops. Considering the complexity of sustaining an ever increasing human population with limited land and food resources, these advances will need to continue. Bacteria are only a portion of the beneficial microbes found in the rhizosphere, as a number of soil-dwelling fungi, archaea, viruses, and protozoa also contribute to plant growth and health. Continued investigations into microbial mechanisms of protection and rhizosphere characterization forecasts an exciting future of microbe-driven agricultural advancement!

Erica Bizzell, Ph.D., is currently an AAAS Science and Technology Fellow with the National Institute of Allergy and Infectious Diseases.