Candida auris is an emerging fungal pathogen with increasing incidence worldwide. Many C. auris isolates are drug resistant, but drug-sensitive strains are also associated with high morbidity and mortality, even when patients are on antifungal therapy. Why is this fungus so virulent, moreso even than other invasive Candida species? A new mBio article reports on a feature of C. auris that may contribute to its ability to cause serious disease: its ability to evade the innate immune system.

C. auris is a relative of the human opportunistic pathogen C. albicans, which can also cause systemic disease in people, but unlike C. albicans, C. auris isn’t part of the normal human commensal flora. To investigate how the immune system responds differently to these related fungi, first author Chad Johnson and senior author Jeniel Nett used a zebrafish model of infection to look at immune cell interactions with the fungus.

The research team focused on neutrophil responses, which are important to control other invasive fungi, including C. albicans. They studied infection in a zebrafish line with two transgenes to help identify neutrophil-specific activity: a cytoplasmic green fluorescent protein expressed in the cytoplasm of neutrophils, and a red fluorescent protein (called mCherry) expressed by a histone. Cells use histones to store DNA in a compact manner, but neutrophils use DNA in a different way than many cells: they expel DNA in extracellular traps called “NETs” (neutrophil extracellular traps), which are structures that contain DNA, histones, and proteins with antimicrobial activity that are part of the neutrophil defense arsenal.

After infecting the zebrafish with C. albicans, the scientists observed bright extracellular fluorescent signal surrounding the fungal cells, indicating that these cells had been ‘trapped’ by the NETs. However, zebrafish infected with C. auris had very little red fluorescent signal near them – despite the presence of the green neutrophils (see image above). 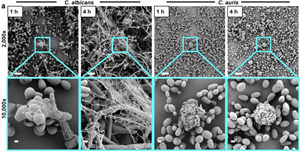 Transgenic C. albicans or C. auris were cocultured with human neutrophils and imaged by scanning electron microscopy after 1 and 4 h. The measurement bars represent 10 and 1 µm for the 2,000× and 10,000× images, respectively. Source.

How do the C. auris cells escape NETs? The researchers exposed human neutrophils in cell culture to different parts of C. auris cultures: either the cells themselves, or the spent medium from fungal culture. Neither cells nor spent medium inhibited neutrophils from making NETs, suggesting the C. auris cells don’t actively inhibit NET production. Instead, the authors suggest that C. auris evades detection by neutrophils, perhaps by lacking surface structures used by other fungi, and thus they don’t activate the NET response.

If C. auris fails to activate the innate immune response, it may help explain why this specific fungus causes such serious disease. As C. auris continues to spread around the world and across the U.S., studies like these will be important to determine how it causes disease – and hopefully to find a suitable treatment.

For more about how zebrafish can be used in microbiology studies, check out a Meet the Microbiologist podcast episode featuring John Rawls, who uses zebrafish to study the microbiome.