A Little Change Can Make a Lot of MIC Difference: the Inoculum Effect and Antibiotic Susceptibility Testing 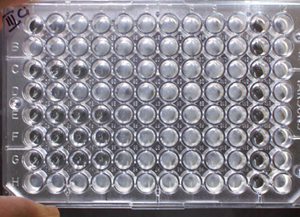 Broth microdilution assays are a standard way to test antibiotic susceptibilty of clinical and lab strains.

Testing for antibiotic susceptibility begins by inoculating cultures to a standardized cell density for use with broth microdilution assays. Cultures with standard cell density, set by the Clinical and Laboratory Standards Institute (CLSI), are subjected to a range of antibiotic to determine the minimal inhibitory concentration (MIC), which can play a decisive factor in the drugs administered to sick patients. A new Antimicrobial Agents and Chemotherapy report suggests that small differences in inoculum density can affect the outcome of MIC testing, and used clever new technology to demonstrate it.

AAC Journal: The Inoculum Effect in the Era of Multidrug Resistance: Minor Differences in Inoculum Have Dramatic Effect on MIC Determination

The CLSI states that broth microdilution assays should begin with a cell density of 5 x 105 cells/ml, but allows a range of 2-8 x 105 cells/ml. Could inocula on opposite ends of this range produce different MICs for the same isolate? To address this question, first author K.P. Smith and senior author James Kirby adapted inkjet technology to refine the inoculation.

The initial culture concentration is known to influence the results of both microbiological experiments and drug susceptibility tests. Called the ‘inoculum effect,’ it’s mostly studied using large differences, such as comparing 100-fold higher concentrations to the CLSI recommended standard, where it alters the MIC for different drug-resistant bacteria. “Extended spectrum beta lactamase (ESBL) or carbapenemase producing organisms often show a marked inoculum effect when testing beta lactams,” said Smith.  “We therefore hypothesized that this inoculum effect may also be present at smaller inoculum differences – even those within the CLSI allowable range.” 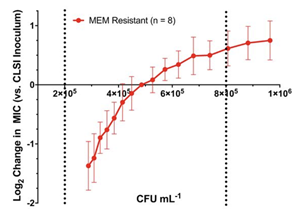 Importantly, differences in MIC were observed even within the CLSI allowable range of 2-8 x 105cells/ml (see figure, right). “MIC results could change up to 8-fold when comparing the lowest and highest inocula allowed by CLSI,” said Kirby. Since the tested inocula are within acceptable limits, the variations seen here may be observed in diagnostic clinical microbiology labs.

What does this mean for patient diagnoses? The work suggests that two susceptibility tests carried out using the exact same workflow with the exact same strain may yield different results based on the initial inoculum concentration. In a worst-case scenario, a test could yield a false susceptibility reading and result in a patient receiving an antibiotic against which their isolate is actually resistant. This is particularly relevant when considering susceptibility of certain beta-lactam drugs against gram-negative pathogens with increasingly common ESBL and carbapenemase-type resistance, noted Kirby.

Could the inkjet technology used by Smith and Kirby become a standard inoculation preparative method? “This technology is not yet commonly used in microbiology labs, although we think it holds great promise,” said Smith. At the moment, use of inkjet technology in microbiology testing is only used in research labs, not clinical diagnostic labs, though an abstract presented at ASM Microbe 2018 suggests the Center for Disease Control and Prevention (CDC) is incorporating use of this inkjet technology within its Antibiotic Resistance Laboratory Network (ARLN) for setting up antibiotic testing panels as previously described by Smith and Kirby in a Journal of Clinical Microbiology article.

Smith and Kirby's latest manuscript demonstrates the power of inkjet printing technology to address the two variable in susceptibility testing, inoculum and antibiotic drug levels, to provide a comprehensive solution to enhance accuracy across labs to ensure the best antimicrobial susceptibility testing, and best patient outcomes possible in the era of multi-drug resistance, where accurate results count more than ever.

For further reading on inoculum effect: