Yeast through the Years: from Hidden Fermenters to Synthetic Biology 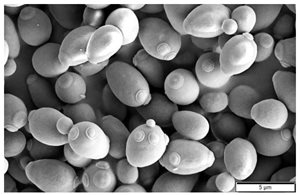 Figure 1: Scanning electron micrograph of the budding yeast Saccharomyces cerevisiae, at a much higher resolution than what Anton van Leeuwenhoek saw in 1680. Source.

The first fermentations occurred when wild yeasts landed in vats of sugar-rich beverages thousands of years before anyone had an inkling that fermentation is a biological process. Archaeological evidence points to the late Stone Age as one of the earliest evidence of intentionally fermented beverages. But it wasn’t until 1680 that Anton van Leeuwenhoek observed yeast under the microscope (Figure 1) and the 1800s when Theodor Schwann and Louis Pasteur deciphered the microbial nature of fermentation.

Since then, brewers have been experimenting with hybrid strains of yeast or mutating them to select for resulting yeasts with the desired product. As an example, the lager yeast, Saccharomyces pastorian, is a hybrid between Saccharomyces cerevisiae and the wild yeast Saccharomyces eubayanus and is capable of brewing beer at cold temperatures.

Though yeast has become an industrial powerhouse for brewing, there are many applications of fermentation aside from food and drink. Metabolic pathways have been modified to optimize ethanol production from corn, cassava starch and other crops, and yeast has been used to generate large quantities of recombinant proteins. In scaling up these fermentations, scientists have looked to redesigning the yeast genome to create new strains with enhanced growth and more efficient production.

These efforts were helped by the sequencing of baker’s yeast (Saccharomyces cerevisiae), which was reported in 1996. The initial push to sequence all 12 million base pairs split among 16 chromosomes began in 1989. This global effort included labs from Europe, North America, and Asia though a “divide and conquer” strategy. At the time of completion, this yeast genome was the largest genome completely sequenced and preceded the completion of the human genome sequencing project by seven years.

Twenty years later, in 2016, the Synthetic Yeast Genome Project published the complete design of a synthetic eukaryotic genome, Sc2.0. The goal of the project was to streamline and “untangle” the genome of this highly studied yeast species. Sc2.0’s design is a highly modified S. cerevisiae genome that is reduced in size by approximately 8%, with 1.1 megabases of the genome deleted, inserted, or altered.

While there are several reasons to streamline the genome, the most obvious is allowing the organism to grow faster. Faster replication means time and cost savings for researchers or industrial applications. But hidden beneath the surface is a simpler, more tractable genome to work with. Think about a computer scientist debugging code in a problematic piece of code, for example. If the code were simple, containing only the pieces necessary to run the script, the programmer could more easily find the source of the problem. Streamlining the genetic code could have similar effects—by eliminating repetitive regions such as transposons and tandem repeats, or nonessential genes, synthetic biologists may be able to better predict the outcomes of introduced or modified pathways.

This isn’t the first organism for which scientists have replaced a natural chromosome with a chemically synthesized one. That would be Synthia, the Mycoplasma mycoides bacterium which had its genome famously replaced by a synthetic one in 2010. Synthia 3.0 was subsequently derived by removing genes determined to be nonessential to create a minimal bacterial genome of 473 genes, smaller than the 525-gene genome of Mycoplasma genitalium, the smallest for an autonomously replicating cell in nature. From those studies, scientists were able to learn about cell replication, essential genes and the most efficient ways to build a chromosome, which can involve very long, delicate pieces of DNA that need to remain intact during handling. However, a bacterium like Synthia only has a single, circular piece of DNA that comprises its genome; S. cerevisiae, with its 16 linear chromosomes, has a genome ~12 times as large.

Earlier this month, researchers from the Chinese Academy of Sciences published a paper describing the creation of a functional single-chromosome yeast. The 16 linear chromosomes from the wild-type Saccharomyces cerevisiae genome were successively fused together end-to-end while removing 15 centromeres and 30 telomeres. This is the first time that a eukaryote with a single linear chromosome has been created in the laboratory. Another study also published this year showed the fusion of yeast strains possessing a range of 16 to two chromosomes. 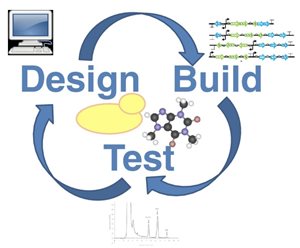 Building chemically synthesized genomes and fusing chromosomes falls under the field of synthetic biology, an interdisciplinary branch of biology that applies biological principles to build artificial biological systems (Figure 2). In addition to addressing fundamental biological processes surrounding chromosome building, synthetic biology is helping scientists design better pathways. Redesigned pathways could speed the production of complex molecules like THC or rose oil by yeast, as well as other, more medically related compounds. Instead of shaping and evolving microbes by selecting for favorable traits over many microbial generations, synthetic biology allows us to design organisms that do precisely what we ask of them.

Dr. Jennifer Tsang is the science communications and marketing coordinator at Addgene and a freelance science writer. She has completed a Ph.D. in microbiology studying bacterial motility and studied antimicrobial resistance as a postdoctoral fellow.