Multiplex Gastrointestinal Pathogen Panels: the Promise and the Peril

It is difficult to think of a clinical syndrome that can be caused by a broader array of infectious pathogens than diarrhea. Viruses, including the notorious norovirus, are a frequent cause of watery diarrhea associated with vomiting, while various species of gram-negative bacteria cause diarrhea that is often associated with fever, bloody stools, and systemic complications, such as Guillain-Barre syndrome triggered by Campylobacter jejuni enteritis, and hemolytic uremic syndrome following Shiga toxin-producing E. coli (STEC) infection. In certain populations, including travelers and immunocompromised patients, parasites such as Giardia intestinalis, Entamoeba histolytica and Cryptosporidium parvum are also frequent causes of infectious diarrhea. 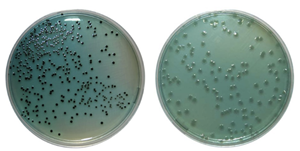 History-taking has traditionally been a clinician's most valuable tool in narrowing down the broad differential diagnosis for infectious diarrhea and deciding which etiologies should be tested for in a given patient. For bloody diarrhea, bacterial pathogens rise to the top of the differential, and stool cultures for the "SSYCE" organisms (Salmonella, Shigella, Yersinia, Campylobacter and Shiga-toxin-producing E. coli) are typically the tests of choice (Figure 1). Recent consumption of raw shellfish in a patient with diarrhea should prompt consideration of Vibrio infection, while diarrhea following a meal containing homemade chitterlings (intestines, usually of a pig, that have been boiled, stewed or fried) is a classic presentation of Yersinia enterocolitica infection. C. difficile should be considered in anyone who develops severe diarrhea while taking antibiotics. These are, of course, just a few examples; the Infectious Diseases Society of America recently released an updated guideline on infectious diarrhea, which outlines the most likely causative organisms according to patients' exposures and symptoms.

Even when a clinician has decided which gastrointestinal pathogens to test for, determining which test to order can be a challenge in itself. Many doctors are confused about the best tests to use for detection of ova and parasites and may inadvertently fail to order appropriate stains or other tests to detect some of the most common parasitic causes of diarrhea, such as Cryptosporidium. Several different types of C. difficile testing are available, and clinicians may be confused by complex results, such as the detection of C. difficile toxin by enzyme immunoassay but not by PCR, particularly when labs switch to a new test type. For better or for worse, however, patients don't always have a single, obvious risk factor or a classic disease presentation. A patient who comes to the office with several weeks of watery diarrhea that began 10 days after drinking from a mountain stream during a backpacking trip has a textbook case of giardiasis. A more typical real-life presentation, however, is a patient with diarrhea that's usually watery but occasionally bloody, who had a fever at first but doesn't anymore, and who ate some egg salad yesterday that tasted a little funny, and also had some undercooked meat last week (or maybe the week before), and finished a course of antibiotics recently, and spent the weekend with a nephew who's been vomiting—in other words, even the most careful history-taking can't always compensate for the complexity of real-life exposures and symptoms, and figuring out which one or two tests are the most likely to yield positive results is not always straightforward.

The Multiplex Assay: What Is Gained and What Is Lost 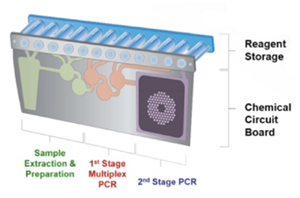 An illustration of the FilmArrayTM pouch. Source.

Given the broad differential for infectious diarrhea and the complexities involved in selecting the best tests for each patient, it is not hard to see the appeal of a rapid, easy-to-use, multiplex assay that, using a single stool specimen, can test for pathogens that previously would have required multiple bacterial cultures, microscopic ova and parasite examination, parasite immunoassays, and viral culture and PCR. FDA-cleared panels of this type include the BioFire FilmArrayTM Gastrointestinal Panel, which uses a nested multiplex PCR method to test for 22 different targets (Figure 2), and the Luminex xTAG® Gastrointestinal Pathogen Panel and VERIGENE® Enteric Pathogens Test (EP), which follow multiplex PCR with bead hybridization and microarray hybridization, respectively. The targets on the FilmArrayTM and xTAG® panels include Giardia and Cryptosporidium, common parasitic causes of diarrhea that can be missed by a clinician who is using traditional testing but does not recognize the need to supplement standard ova and parasite examination with special stains and immunoassays to detect these pathogens. The panels can also be of value for infection control purposes: while norovirus, which is featured on all the panels, does not require any specific therapeutic interventions for most patients, its detection has important implications for patient cohorting and prevention of spread among health care workers.

When it comes to diagnostic testing, however, more is not always better. It has been said that ordering a lab test is like picking your nose in public: you should not do it unless you have a plan for what to do with the result. But a doctor who orders a 22-target gastrointestinal pathogen panel in a patient she suspects of having Salmonella or Shigella may find herself feeling a bit like the short-sighted nose picker when she receives a report that all bacterial and parasitic targets are negative but that sapovirus was detected in the sample. A quick search will reveal that there is no available treatment for this virus, but what are the infection control implications? How long are symptoms expected to last? What if the patient is severely immunosuppressed, or lives in a household with someone who is? What if Plesiomonas is detected? How severe do the symptoms have to be to treat this pathogen?

The potential excess of information is not the only problem with multiplex testing: there is also information lost by using molecular testing for bacterial pathogens. State public health departments rely on evaluation of cultured isolates of organisms like Salmonella to trace outbreaks. Labs that transition their stool pathogen testing to a multiplex molecular panel should have a system in place to preserve some of the original patient specimen to allow for isolation by culture of relevant bacterial pathogens after they are detected by the panel. The potential loss of essential epidemiologic data through the transition to culture-independent testing methods for foodborne diseases, as well as the risk of an apparent increase in frequency of such infections due to higher rates of detection using molecular methods, were discussed in a recent editorial and a point-counterpoint article in the Journal of Clinical Microbiology. Another piece of information that is lost in the switch from culture-based isolation to molecular testing is the viability of an organism. Because the DNA of a pathogen may be detectable well after the organism has died, a positive PCR result could reflect a resolved infection and lead to unnecessary treatment or an incorrect diagnosis. 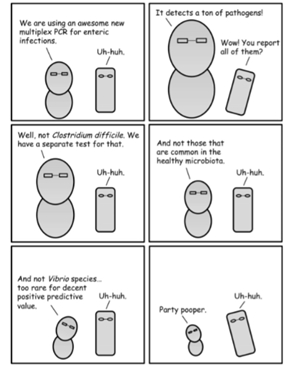 The ease, rapidity and extensive range of pathogen detection provided by multiplex molecular panels is likely to result in their continued (and, in fact, increasing) presence in the microbiology laboratory. As the cost of such tests fall, the savings they provide in labor are likely to outweigh the increased spending required to run a relatively expensive system. (Whether they lead to hospital-wide cost savings through decreased antibiotic use, earlier discharge, improved outbreak control, and so forth, remains to be determined.) However, both labs and clinicians should be aware of the limitations and drawbacks of these types of tests (Figure 3). Rather than completely doing away with more traditional means of testing for all the organisms on the panels, labs should consider having certain individual tests available (perhaps performing them less frequently if demand is lower), so that if a clinician strongly suspects only one or two pathogens, or needs information that can be obtained only from a viable culture, the appropriate tests can still be used in a targeted fashion.