The State of Neither Up nor Down, also Known as "Intermediate"

Have you heard the one about the grand old Duke of York? You know; he had 10,000 men?  Marched them to the top of the hill, and marched them back again? Well, maybe not: I assume most of you grew up outside the British Commonwealth. But as a young'un, this was my favorite nursery rhyme. The best part is when the men are halfway up the hill and "neither up nor down." What an awesome state—neither up nor down—a grey zone for strolling up a knoll! But the wily old Duke knew that his estimates on the location of that hill's midpoint were less than accurate when he sent his men on their futile adventure. At the time (circa 1411 -1741, according to Wikipedia—also apparently not very accurate), these measurements involved a fair deal of eyeballing, triangle measuring and water boiling. As a result, depending on the height of the hill, it could be yards and yards over which the men were stomping in a state he could not be sure was up nor down! And let's not forget, there are 10,000 of these men. They can all probably cluster relatively easily at the bottom of the hill, and also at the top. But when the men are on their way up the hill, there is likely spread, with some of the men being more up than down, and others more down than up. So, you can see—measuring a population of beings and categorizing them when they are in-between two states is complex. Sometimes, as the Duke recognized, having a grey zone helps with these areas of diagnostic uncertainty.

This is all sounding familiar to what we do in our susceptibility tests, isn't it? Except we measure a population of 108 bacteria instead of 10,000 men and evaluate growth instead of progress up a hill. Nonetheless, it's generally pretty easy to tell when the bugs are at the bottom (very susceptible), or when they are at the top (frankly resistant). Things in between are more of a challenge, both in the laboratory and for the clinician. We recognize this, and, like the Duke, apply a grey zone known as the "intermediate" (I) susceptibility category. However, many feel this category does not truly help address the problem of how to interpret and treat the bugs when they are neither up nor down. Fair enough—maybe it's time to refine our definitions a little bit (even if we are still eyeballing the MICs). 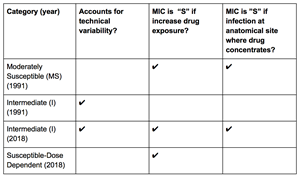 Let's take a look at the history behind the how we got to where we are with "I." Over the years since NCCLS/CLSI first defined the intermediate category (over a bottle or two of Jack Daniels—a tradition I think we need to revive at the CLSI meetings) there have been three different ways of defining this in-between zone. These included our familiar "intermediate (I)", the less familiar "moderately susceptible (MS)" and, most recently, "susceptible dose-dependent (S-DD)"" (Table 1). Back in 1991, both MS and intermediate were used. MS referred to isolates with MICs that approached attainable serum levels of the antibiotic and implied clinical applicability in body sites where the drug is physiologically concentrated, when high dosage of drug could be used, or when combination drug therapy was required (e.g., beta-lactam/aminoglycoside synergy for enterococci). In contrast, back in 1991, intermediate was the buffer zone to prevent uncontrolled variability in the MIC determination from leading to false-susceptible or false-resistant reports. By 1995, MS was out of favor (and out of the M100 document), and the definition of intermediate was expanded to include both diagnostic uncertainty and applicability with higher drug exposures. Things were silent for about 20 years, but then came revision to the cefepime breakpoints in 2014, when we decided that (a) cefepime was an important drug, (b) we didn't want to limit its use by being overly conservative with the breakpoint, (c) there are about as many dosing regimens as men in the Duke of York's army for cefepime, and (d) people thought intermediate meant "pretty much resistant," and avoided intermediate drugs like the plague. We rebranded intermediate to S-DD for this drug, hoping that in this era of limited therapeutic options it would shed clarity on the fact that the drug could be used, but at dosing that would result in a higher exposure of the bacteria to the antibiotic. Maybe Jack Daniels was present at that meeting—I can't be sure. This change led many to start questioning whether an intermediate category should exist only for those drugs where there is an option of increasing the drug exposure through increased dose, dosing intervals, or other fancy-pants methods. But remember, today, "I" means both "diagnostic uncertainty" AND "susceptible with increased exposures." So, how can we cut one and not lose the other? 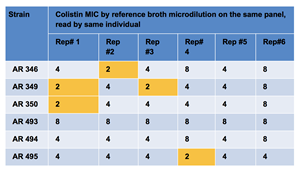 Table 2. Colistin MICs measured by reference broth microdilution on one day, in 6 replicates, for mcr-1 producing E. coli. Yellow boxes represent results that are considered to be "wild-type" for colistin.

Let's review MIC inaccuracy. You might have thought I was being tongue-in-cheek when I said we eyeball MICs. But seriously, we really do read them by eye by the gold-standard broth microdilution (BMD) MIC method! Sometimes we even get crazy and use a magnified mirror. As a result of this, and a lot of other variables (like incubation time, temperatures, inoculum variations, etc.), the absolute agreement of BMD against itself is only about 85-95%. For some isolates, it's even lower. When these MICs fluctuate at the low or high end of the MIC range, it doesn't cause a clinically relevant dilemma. S is S, R is R, regardless of the MIC spread. However, when the MIC is near the breakpoint (like soldiers in the middle of the hill), it can result in an isolate testing variably S or R as it flip-flops across the breakpoint (for example, see Table 2 for colistin data). Very few people know the breakpoints by heart, and so if one receives an MIC of 2 µg/mL interpreted as S, most would assume it's a go for that drug. If you are friends with the lab and know the breakpoints, you might find out that 2 is right at the S/R breakpoint, and if you know about MIC variability, proceed with caution. This is one place where intermediate is helpful—it provides a buffer zone to prevent  this MIC variability from resulting in false susceptible calls for isolates that are truly resistant, or vice versa. In particular, having an intermediate category is helpful for disk diffusion testing, where the zone diameters are not reported. In this case, unless you trek down to the lab, pull out the calipers and measure the zone yourself, you don't really know if the "S" is a nice big 35-mm zone, or a 15-mm one right at the breakpoint. 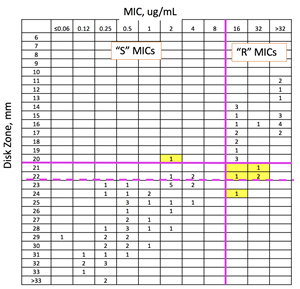 Figure 1. Ceftazidime-avibactam MICs vs. disk diffusion zones. In this study having no intermediate disk category resulted in a 16% very major error (false susceptibility) by disk. Addition of an intermediate zone (dashed line) resolves these. Many resistant isolates have MICs at the breakpoint.

EUCAST has recently evaluated the issue of intermediate categories. While they are still deliberating where exactly they will go, their current thinking is that technical uncertainty is something that needs to be resolved in the laboratory. An "area of technical uncertainty" (ATU) category would be established for those drug/bug combinations that they know to be particularly variable. When the laboratory identifies isolates in the ATU, they could repeat test by another method, not report the drug, or report it as "cannot be determined." To be honest, none of these are that pleasing (but then again, sometimes AST is messy and this is a great example of messiness). They also intend to rebrand intermediate to only indicate "susceptible, if increased exposure is possible." If a drug/bug is deemed not prone to variability, and no alternative dosing strategy exists, no intermediate category or ATU will be proposed. I am not sure any drug exists which has no testing issues, especially when you consider the variety of testing methods used by clinical laboratories, which makes having some drug/bugs with no intermediate a bit scary. In particular, new drugs are being developed for resistant bacteria, where the pharmaceutical companies are already maximizing the doses to improve efficacy. If intermediate only applies when increased exposures are possible and expected to improve efficacy, then for these drugs no intermediate category would be established. However, the target isolates for these very broad spectrum drugs are outside the wild-type and will be invariably tricky to test. An example of this is data for ceftazidime-avibactam in Figure 1, which shows MIC-to-disk correlates. With no intermediate category, many "very major" errors (false susceptibility) are obtained by the disk. If an intermediate is applied, many of these are avoided. Of course, I would love to have a test that is 100% accurate, but the reality is we just do not have such a method.

CLSI has only started to investigate revisiting intermediate categories. I think it's clear we need to differentiate the definitions of intermediate such that when the lab is saying, "I'm not totally sure if this bug is S or R" it's clear we don't really mean, "maximize that dose" Probably, if an exposure can be increased due to the anatomical location of the infection or the dosing strategy, this would trump the technical uncertainty of the test. However, in those cases where this isn't possible, having a buffer zone is helpful. I also think it would be helpful for us to start thinking about MICs as "ranges" rather than discrete numbers. I.e., an MIC of 2 µg/mL is really 1-4 µg/mL.

I'm sure more is to come on this, from both CLSI and EUCAST, so stay tuned for more updates.

Do you have a suggestion for a Bugs & Drugs topic?

Do you have an AST question you can't answer? A strange result you've received? We want to write about what you want to read about. Just leave a note in the comment section below or contact Julie Wolf at jwolf@asmusa.org.