A Whale of a Microbiome Tale

When it comes to microbiome studies of animals, some animals seem inherently easier to study than others. Some animals, like dogs and cats, are so accessible that there are citizen science projects built around studying their microbiomes. Some animals, like the komodo dragon, are less accessible, but zoological exhibits provide at least a few specimens for study. But some animals present such a challenge that they require novel technologies for sample gathering. Whales are safely in this final category, yet a new study sampled the skin microbiome of 89 different humpback whales, and the resulting analyses are now available in Applied and Environmental Microbiology.

AppEnvMicro: Temporal and regional variability in the skin microbiome of humpback whales along the Western Antarctic Peninsula

The scientific team, led by first author K. C. Bierlich and senior scientist Amy Apprill, have published on whale microbiomes before: they used drones to collect expulsions from humpback whale blowholes. In the current study, the sampling was more direct: using a crossbow, the researchers collected samples from the upper flank near the dorsal fin. Bacterial and archaeal compositions were analyzed by 16S rRNA gene sequencing, and the researchers noted the GPS location where each sample was taken. The researchers sampled at two different times: early austral summer (summer in the southern hemisphere) in 2013 and late austral summer in 2010. This allowed comparison of animals in different geographic areas within the Western Antarctic Peninsula, where the research was based, but also at different times within the animals’ annual behavioral changes. 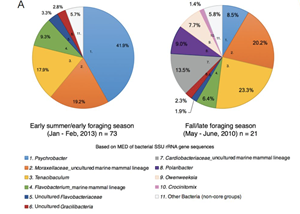 Pie charts representing the average abundance of each core microbiome lineage for both early and late foraging season. Source.

Humpback whales spend time in high-latitude regions during the summer when they eat, and migrate to low-latitude regions in the winter for breeding. In the samples taken at different times during the feeding season, some microbial groups persisted regardless of season or location of sample collection, but other microbial groups underwent seasonal fluctuations (see right). Different oceanic conditions, such as water temperature, may influence the microbiome composition, but so may dietary changes, which can affect skin pH or lipid composition to favor different bacterial communities. Other characteristics, such as geographic location, correlated with microbiome differences, while some, like sex of the animal, did not.

Why go to all the trouble to study whale microbiome composition? Whale health is a good indicator for ocean health, since these large animals must consume mass quantities of food for growth; whales doing poorly may be an indicator of poor food or water quality. Apprill’s group focuses on humpback whales in part because they are found in all oceans, and because their seasonal migrations between different oceanic regions exposes them to a variety of conditions. Monitoring the health of these long-lived animals may reveal information about the health of the oceans they dwell in.