Analyzing the Past to Protect Our Future: Discussing the 1918 Flu Pandemic at ASM Biothreats

This was also the world in which the 1918 influenza epidemic took place.

Despite their advancements, societies and countries around the world experienced vast losses of life and cultural shifts due to the 1918 influenza pandemic. Lessons learned about influenza preparation in the 100 years since then were discussed at a dinner session at the 2018 ASM Biothreats meeting. Moderator and health security expert Gigi Kwik Gronvall led a conversation between Scott Knowles of the Department of History at Drexel University and Jason Matheny, Director of the Intelligence Advanced Research Projects Activity (IARPA). The panel discussed the history of the pandemic and how understanding this history might help us prepare for a similar event in the future. 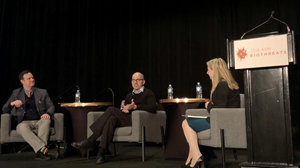 Preparing for disasters, including the disaster of epidemic infectious disease, requires coordination between public health workers, communications officials, government agencies, and health care providers to release accurate information to the public and to educate communities on the best courses of action. People living in 1918 were at the forefront of many medical and technological advances (as we are 2018). “If you lived in 1918, you were living in an age of wonders. You were living in a time when rabies, typhoid—they now had shots for these things,” said Knowles. This was also the era of World War I, which affected all aspects of government and civilian life. The US entry into the war led to passage of the Espionage and Sedition Acts, which made it illegal to use “abusive language about the form of government of the United States.” In addition to stifling information about sick soldiers, these acts led news outlets to feel obligated to print morale-lifting news. Very few news outlets covered the severe illness that was affecting many soldiers in their barracks. Information censorship, practiced in many nations at the time, made these countries less prepared when the disease spread from the armed forces into the civilian population.

Knowles also emphasized that not all disasters are given equal attention or prioritization, creating a dominant disaster paradigm within policymaker circles. War is often seen as a top-priority disaster, and this prioritization affects the attention given to other ongoing events. In the fall of 1918, as influenza was raging through troops in the US, shipments of troops to the war in France continued even as some in the Army Medical Corps recommended suspending deployments until the infection could be brought under control. Army staff officers urged continuing the deployment of US troops overseas because of military considerations, and President Wilson agreed that this should be the priority. During the 1918 pandemic, soldiers who died from influenza were often grouped with those who died in combat, further blurring the impact of the disease. Disaster prioritization even affects the way that disaster events are remembered and contextualized by historians; there are many more war memorials than infectious disease memorials. Special cemetery markers or long lists of victims help mark deaths as part of a larger event, and further denote that the event should be remembered and studied.

Could an event like the 1918 influenza pandemic happen now?

Historians and researchers continue to debate the exact reasons why the 1918 influenza outbreak was so severe. Many argue that the ongoing war contributed to the spread of disease, either directly through the movement of troops transmitting the illness, or indirectly through war-related conditions creating a malnourished and vulnerable population throughout Europe. However, even without a worldwide war, a pandemic influenza or similar infectious disease could create chaos and damage to our societal infrastructure today. Matheny gave the example of the antiviral drug Tamiflu, demand for which would increase if there were a pandemic. Several components necessary to produce Tamiflu are delivered as just-in-time manufactured constituents from supply chains that could easily be broken if the workforce were to drop by 30%, as happened in 1918. In fact, global trading patterns could make the world more vulnerable than in the past, with suspended trade interrupting the ability to produce enough food or goods in some countries.

For that reason, monitoring metrics to predict the onset of an epidemic are very important to Matheny and IARPA; one advantage we have today versus 1918 is our ability to collect and analyze data with amazing detail. Important metrics include not only social media and search queries, but also the sales of over-the-counter medicines, which sick people use to self-medicate. “And when people get sick, one of the first things they do is call off their dinner dates,” Matheny said. Canceled plane flights and other travel plans can also be an illness indicator, and many canceled plans may be an outbreak indicator. To further prepare, IARPA and other disaster preparedness institutions undertake thought exercises to imagine worst-case scenarios under a variety of conditions.

Each influenza pandemic has been unique, and though none have been as severe as the 1918 pandemic, they have pointed public health officials to weak points in preparedness plans. “Disaster reveals vulnerability,” said Knowles. Vulnerability is even greater in areas of the developing world without access to strong health care systems and federal-level disaster responses. “If you want to know how local can provide when federal can’t, look at developing countries,” added Matheny, who previously worked on global health in southeast Asia. As for those global supply chains that may be vulnerable to disruption, they may instead be a source of transmission between countries if shipments are not disrupted. We won’t know unless a global pandemic tests the limits of our systems we have in place.

This session was sponsored by the Open Philanthropy Project.